I am calculating pathfinding inside a mesh which I have build a uniform grid around. The nodes (cells in the 3D grid) close to what I deem a "standable" surface I mark as accessible and they are used in my pathfinding. To get alot of detail (like being able to pathfind up small stair cases) the ammount of accessible cells in my grid have grown quite large, several thousand in larger buildings. (every grid cell is 0.5x0.5x0.5 m and the meshes are rooms with real world dimensions). Even though I only use a fraction of the actual cells in my grid for pathfinding the huge ammount slows the algorithm down. Other than that it works fine and finds the correct path through the mesh, using a weighted manhattan distance heuristic. 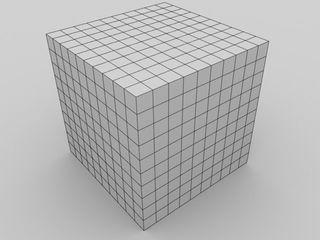 Imagine my grid looks like that and the mesh is inside it (can be more or less cubes but its always cubical), however the pathfinding will not be calculated on all the small cubes just a few marked as accessible (usually at the bottom of the grid but that can depend on how many floors the mesh has).

I am looking to reduce the search space for the pathfinding... I have looked at clustering like how HPA* does it and other clustering algorithms like Markov but they all seem to be best used with node graphs and not grids. One obvious solution would be to just increase the size of the small cubes building the grid but then I would lose alot of detail in the pathfinding and it would not be as robust. How could I cluster these small cubes? This is how a typical search space looks when I do my pathfinding (blue are accessible, green is path): 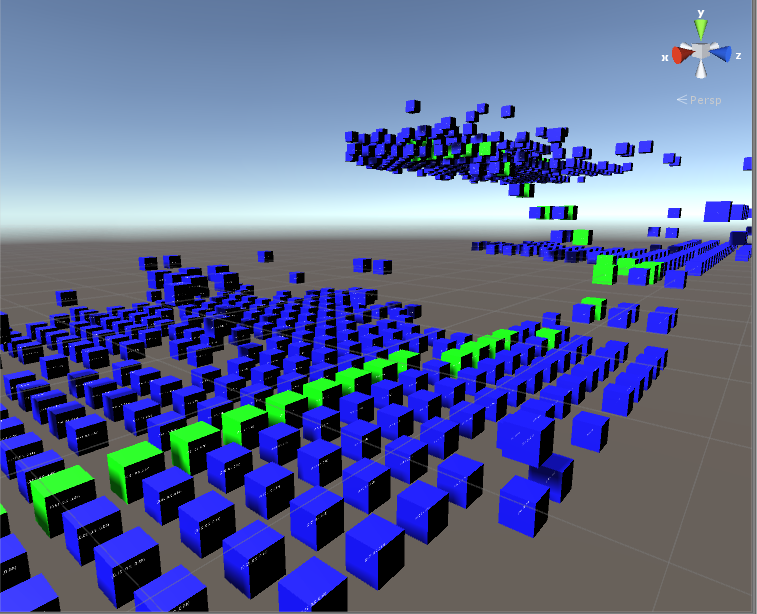 and as you see there is a lot of cubes to search through because the distance between them is quite small! Never mind that the grid is an unoptimal solution for pathfinding for now.

Does anyone have an idea on how to reduce the ammount of cubes in the grid I have to search through and how would I access the neighbors after I reduce the space? :) Right now it only looks at the closest neighbors while expanding the search space.

A couple possibilities come to mind.

The first is that your A* search may be searching the entire problem space. For example, you live in Austin, Texas, and want to get into a particular building somewhere in Alberta, Canada. A simple A* algorithm would search a lot of Mexico and the USA before finally searching Canada for the building.

Consider creating a second layer of A* to solve this problem. You'd first find out which states to travel between to get to Canada, then which provinces to reach Alberta, then Calgary, and then the Calgary Zoo, for example. In a sense, you start with an overview, then fill it in with more detailed paths.

By using layers, you help to narrow down your search area significantly, especially if different areas don't use the same co-ordinate system! (It's fairly hard to estimate distance for one A* pathfinder if one of the regions needs latitude-longitude, another 3d-cartesian, and the next requires pathfinding through a time dimension.)

Finding efficient algorithms becomes more important in 3 dimensions because there are more nodes to expand while searching. A Dijkstra search which expands x^2 nodes would search x^3, with x being the distance between the start and goal. A 4D game would require yet more efficiency in pathfinding.

One of the benefits of grid-based pathfinding is that you can exploit topographical properties like path symmetry. If two paths consist of the same movements in a different order, you don't need to find both of them. This is where a very efficient algorithm called Jump Point Search comes into play.

Here is a side-by-side comparison of A* (left) and JPS (right). Expanded/searched nodes are shown in red with walls in black:

Notice that they both find the same path, but JPS easily searched less than a tenth of what A* did.

As of now, I haven't seen an official 3-dimensional implementation, but I've helped another user generalize the algorithm to multiple dimensions.

Another way to get rid of nodes during the search is to remove them before the search. For example, do you really need nodes in wide-open areas where you can trust a much more stupid AI to find its way? If you are building levels that don't change, create a script that parses them into the simplest grid which only contains important nodes.

This is actually called 'offline pathfinding'; basically finding ways to calculate paths before you need to find them. If your level will remain the same, running the script for a few minutes each time you update the level will easily cut 90% of the time you pathfind. After all, you've done most of the work before it became urgent. It's like trying to find your way around a new city compared to one you grew up in; knowing the landmarks means you don't really need a map.

Similar approaches to the 'symmetry-breaking' that Jump Point Search uses were introduced by Daniel Harabor, the creator of the algorithm. They are mentioned in one of his lectures, and allow you to preprocess the level to store only jump-points in your pathfinding mesh.

Many academic papers state that A*'s cost function is f(x) = g(x) + h(x), which doesn't make it obvious that you may use other functions, multiply the weight of the cost functions, and even implement heatmaps of territory or recent deaths as functions. These may create sub-optimal paths, but they greatly improve the intelligence of your search. Who cares about the shortest path when your opponent has a choke point on it and has been easily dispatching anybody travelling through it? Better to be certain the AI can reach the goal safely than to let it be stupid.

For example, you may want to prevent the algorithm from letting enemies access secret areas so that they avoid revealing them to the player, and so that they AI seems to be unaware of them. All you need to achieve this is a uniform cost function for any point within those 'off-limits' regions. In a game like this, enemies would simply give up on hunting the player after the path grew too costly. Another cool option is to 'scent' regions the player has been recently (by temporarily increasing the cost of unvisited locations because many algorithms dislike negative costs).

If you know what places you won't need to search, but can't implement in your algorithm's logic, a simple increase to their cost will prevent unnecessary searching. There's a lot of ways to take advantage of heuristics to simplify and inform your pathfinding, but your biggest gains will come from Jump Point Search.

EDIT: Jump Point Search implicitly selects pathfinding direction using the same heuristics as A*, so you may be able to implement heuristics to a small degree, but their cost function won't be the cost of a node, but rather, the cost of traveling between the two nodes. (A* generally searches adjacent nodes, so the distinction between a node's cost and the cost of traveling to it tends to break down.)

Although octrees/quad-trees/b-trees can be useful in collision-detection, they aren't as applicable to searches because they section a graph based on its coordinates; not on its connections. Layering your graph (mesh in your vocabulary) into super graphs (regions) is a more effective solution.

Not the answer you're looking for? Browse other questions tagged algorithm unity3d 3d grid path-finding or ask your own question.

7
How to speed up marching cubes?
3
2d grid reachable destinations
3
How to rasterize a 3d mesh?
8
Pathfinding algorithm with specified distance/number of nodes
4
Filing the entire volume of a cube with small cubes in MATLAB
31
Algorithm to place x items equidistantly on an n by m wrapping grid
0
Visiting all nodes in a grid using pathfinding?
4
Any algorithm to fill a space with smallest number of boxes