Check for column name in a SqlDataReader object

How do I check to see if a column exists in a SqlDataReader object? In my data access layer, I have create a method that builds the same object for multiple stored procedures calls. One of the stored procedures has an additional column that is not used by the other stored procedures. I want to modified the method to accommodate for every scenario.

My application is written in C#.

Using Exceptions for control logic like in some other answers is considered bad practice and has performance costs. It also sends false positives to the profiler of # exceptions thrown and god help anyone setting their debugger to break on exceptions thrown.

GetSchemaTable() is also another suggestion in many answers. This would not be a preffered way of checking for a field's existance as it is not implemented in all versions (it's abstract and throws NotSupportedException in some versions of dotnetcore). GetSchemaTable is also overkill performance wise as it's a pretty heavy duty function if you check out the source.

Looping through the fields can have a small performance hit if you use it a lot and you may want to consider caching the results.

It's much better to use this boolean function:

One call - no exceptions. It might throw exceptions internally, but I don't think so.

NOTE: In the comments below, we figured this out... the correct code is actually this:

In one line, use this after your DataReader retrieval:

Much more efficient one-liner that does not requires to load the schema:

I think your best bet is to call GetOrdinal("columnName") on your DataReader up front, and catch an IndexOutOfRangeException in case the column isn't present.

Ok, this post is starting to garner a few down-votes lately, and I can't delete it because it's the accepted answer, so I'm going to update it and (I hope) try to justify the use of exception handling as control flow.

The other way of achieving this, as posted by Chad Grant, is to loop through each field in the DataReader and do a case-insensitive comparison for the field name you're looking for. This will work really well, and truthfully will probably perform better than my method above. Certainly I would never use the method above inside a loop where performace was an issue.

I can think of one situation in which the try/GetOrdinal/catch method will work where the loop doesn't. It is, however, a completely hypothetical situation right now so it's a very flimsy justification. Regardless, bear with me and see what you think.

Imagine a database that allowed you to "alias" columns within a table. Imagine that I could define a table with a column called "EmployeeName" but also give it an alias of "EmpName", and doing a select for either name would return the data in that column. With me so far?

Now imagine that there's an ADO.NET provider for that database, and they've coded up an IDataReader implementation for it which takes column aliases into account.

Now, dr.GetName(i) (as used in Chad's answer) can only return a single string, so it has to return only one of the "aliases" on a column. However, GetOrdinal("EmpName") could use the internal implementation of this provider's fields to check each column's alias for the name you're looking for.

In this hypothetical "aliased columns" situation, the try/GetOrdinal/catch method would be the only way to be sure that you're checking for every variation of a column's name in the resultset.

Flimsy? Sure. But worth a thought. Honestly I'd much rather an "official" HasColumn method on IDataRecord.

Here is a working sample for Jasmin's idea:

this works for me:

The following is simple and worked for me:

If you read the question, Michael asked about DataReader, not DataRecord folks. Get your objects right.

Using a r.GetSchemaTable().Columns.Contains(field) on a DataRecord does work, but it returns BS columns (see screenshot below.)

To see if a data column exists AND contains data in a DataReader, use the following extensions: 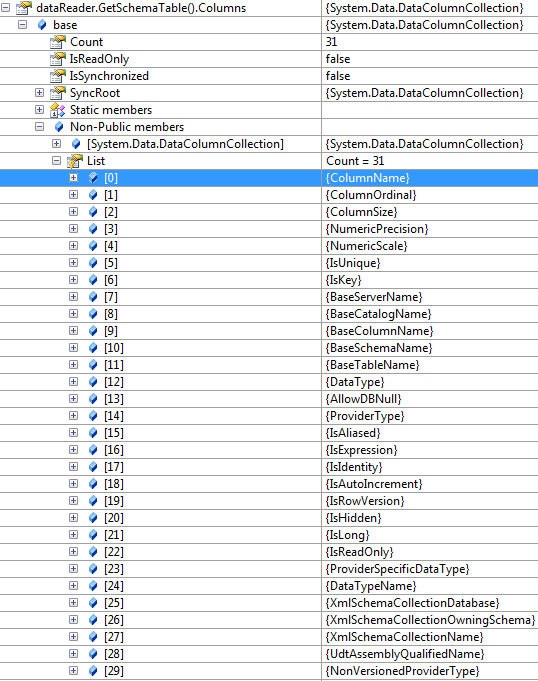 I wrote for Visual Basic users :

I think this is more powerful and the usage is :

Here is a one liner linq version of the accepted answer:

Here the solution from Jasmine in one line... (one more, tho simple!):

Lots of answers with claims about performance and bad practice, so I clarify that here.

The code for some of the top answers work, but there is an underlying debate here for the "better" answer based on the acceptance of exception handling in logic and it's related performance.

DO NOT use exceptions for the normal flow of control, if possible.

The first note is the leniency of "if possible". More importantly, the description gives this context:

What that means is that if you are writing an API that might be consumed by somebody else, give them the ability to navigate an exception without a try/catch. For example, provide a TryParse with your exception-throwing Parse method. Nowhere does this say though that you shouldn't catch an exception.

Further, as another user points out, catches have always allowed filtering by type and somewhat recently allow further filtering via the when clause. This seems like a waste of language features if we're not supposed to be using them.

It can be said that there is SOME cost for a thrown exception, and that cost MAY impact performance in a heavy loop. However, it can also be said that the cost of an exception is going to be negligible in a "connected application". Actual cost was investigated over a decade ago: https://stackoverflow.com/a/891230/852208 In other words, cost of a connection and query of a database is likely to dwarf that of a thrown exception.

All that aside, I wanted to determine which method truly is faster. As expected there is no concrete answer.

Any code that loops over the columns becomes slower as the number of columns exist. It can also be said that any code that relies on exceptions will slow depending on the rate in which the query fails to be found.

Taking the answers of both Chad Grant and Matt Hamilton, I ran both methods with up to 20 columns and up to a 50% error rate (the OP indicated he was using this two test between different procs, so I assumed as few as two).

Here are the results, plotted with LinqPad:

The zigzags here are fault rates (column not found) within each column count.

Over narrower result sets, looping is a good choice. However, the GetOrdinal/Exception method is not nearly as sensitive to number of columns and begins to outperform the looping method right around 11 columns.

That said I don't really have a preference performance wise as 11 columns sounds reasonable as an average number of columns returned over an entire application. In either case we're talking about fractions of a millisecond here.

However, from a code simplicity aspect, and alias support, i'd probably go with the GetOrdinal route.

Here is the test in linqpad form. Feel free to repost with your own method:

This code corrects the issues that Levitikon had with their code: (adapted from: [1]: http://msdn.microsoft.com/en-us/library/system.data.datatablereader.getschematable.aspx)

NOTE: this seems to only return the name of the first column...

EDIT: corrected code that returns the name of all columns, but you cannot use a SqlDataReader to do it

To keep your code robust and clean, use a single extension function, like this:

Neither did I get GetSchemaTable to work, until I found this way.

Basically I do this:

In your particular situation (all procedures has the same columns except 1 which has additional 1 column), it will be better and faster to check reader. FieldCount property to distinguish between them.

I know it is an old post but I decided to answer to help other in the same situation. you can also (for performance reason) mix this solution with the solution iterating solution.

My data access class needs to be backward compatible, so I might be trying to access a column in a release where it doesn't exist in the database yet. We have some rather large data sets being returned so I'm not a big fan of an extension method that has to iterate the DataReader column collection for each property.

I have a utility class that creates a private list of columns and then has a generic method that attempts to resolve a value based on a column name and output parameter type.

Then I can just call my code like so

The key to the whole problem is here:

If the referenced three lines (currently lines 72, 73, and 74) are taken out, then you can easily check for -1 in order to determine if the column doesn't exist.

The only way around this while ensuring native performance is to use a Reflection based implementation, like the following:

The Reflection based extension method:

You can also call GetSchemaTable() on your DataReader if you want the list of columns and you don't want to have to get an exception...

It probably would not be as efficient in a loop

Although there is no publicly exposed method, a method does exist in the internal class System.Data.ProviderBase.FieldNameLookup which SqlDataReader relies on.

In order to access it and get native performance, you must use the ILGenerator to create a method at runtime. The following code will give you direct access to int IndexOf(string fieldName) in the System.Data.ProviderBase.FieldNameLookup class as well as perform the book keeping that SqlDataReader.GetOrdinal()does so that there is no side effect. The generated code mirrors the existing SqlDataReader.GetOrdinal() except that it calls FieldNameLookup.IndexOf() instead of FieldNameLookup.GetOrdinal(). The GetOrdinal() method calls to the IndexOf() function and throws an exception if -1 is returned, so we bypass that behavior.

this work to me

you can get more details from here : Can you get the column names from a SqlDataReader?

Not the answer you're looking for? Browse other questions tagged c# .net sqldatareader or ask your own question.

46
Checking to see if a column exists in a data reader
8
Detecting if an IDataReader contains a certain field before iteration
0
Check a column if doesn't exists in SqlDataReader
0
Getting a “System.IndexOutOfRangeException”
0
how to learn if a column exists or not before calling GetOrdinal(“columnname”) method in C#?
282
Can you get the column names from a SqlDataReader?
92
Which, and why, do you prefer Exceptions or Return codes?
73
How expensive are exceptions in C#?
53
how to check if a datareader is null or empty
21
Resharper suggests parameter can be of type 'BaseType'
See more linked questions

2311
Deep cloning objects
601
Cross-thread operation not valid: Control accessed from a thread other than the thread it was created on
282
Can you get the column names from a SqlDataReader?
1016
Group By Multiple Columns
869
Is there a way to check if a file is in use?
1590
Type Checking: typeof, GetType, or is?
1002
Deserialize JSON into C# dynamic object?
1000
How do I turn a C# object into a JSON string in .NET?
13
Unit testing - stubbing an SqlDataReader
1459
Why not inherit from List<T>?