How does Generator.next() processes its parameter?

The documentation says that "You can also provide a parameter to the next method to send a value to the generator." Where does it sends it to?

For example, take these 3 generators:

In generators 3 and 1, the argument passed has no effect on next. Why is that? How does generator 2 calculates its return value? Why it is affected by the given argument?

The key to understanding this is knowing how the next function retrieves the argument passed to next(), which is as the return value of the yield operator:

Independently of the value of [expression], yield will assign to rv the value passed to next().

But, here comes the tricky part: yield will only assign the value passed to next() when resuming execution from a previous iteration. As a consequence, on the first iteration, yield does not assign anything to rv.

For example, if I have this generator:

Here's an annotated example showing the logical flow and scope for the values passed to a generator's next method. The affected area of the next method call is highlighted in the corresponding color. 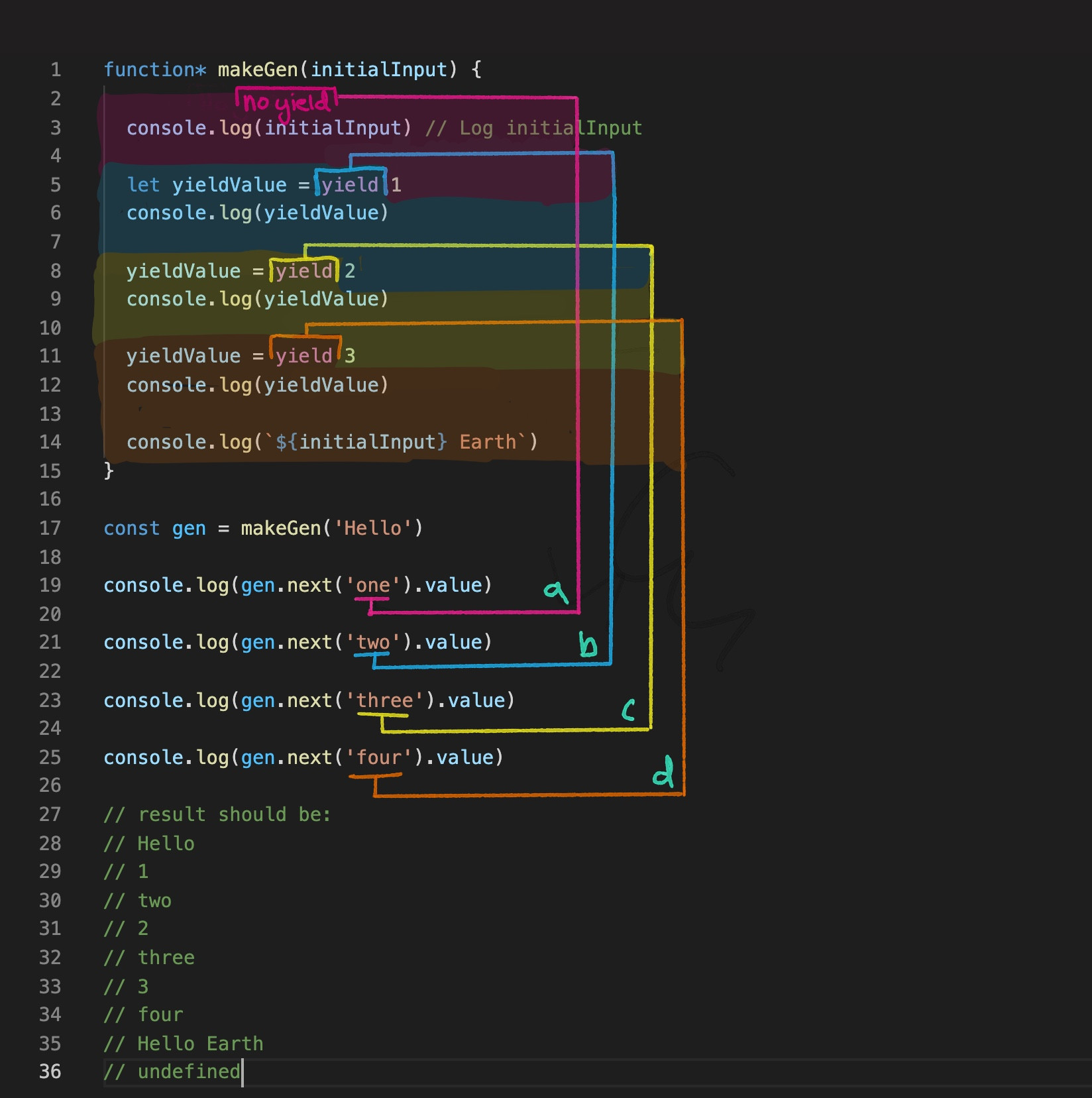 a: There is no yield, so argument 'one' is ignored. The generator pauses on line 5, returning the value 1.

b: Execution resumes and 'two' replaces yield on line 5, and is assigned to the yieldValue variable. Line 6 is executed. The generator pauses on line 8, returning the value 2.

c: Execution resumes and 'three' replaces yield on line 8, and is assigned to the yieldValue variable. Line 9 is executed. The generator pauses on line 11, returning the value 3.

d: Execution resumes and 'four' replaces yield on line 11, and is assigned to the yieldValue variable. Line 12 is executed. Line 14 is executed. Finally the generator is now done, returning the value undefined.

Not the answer you're looking for? Browse other questions tagged javascript ecmascript-6 or ask your own question.

7624
How do JavaScript closures work?
8402
How do I check if an element is hidden in jQuery?
7060
How do I remove a property from a JavaScript object?
7707
How do I redirect to another webpage?
6011
How do I include a JavaScript file in another JavaScript file?
8211
What does "use strict" do in JavaScript, and what is the reasoning behind it?
7414
How to check whether a string contains a substring in JavaScript?
4350
Why does Google prepend while(1); to their JSON responses?
10734
How can I remove a specific item from an array?
6386
How do I return the response from an asynchronous call?