Difference between ExtractIcon and ExtractAssociatedIcon? Need to extract icon of specific size

Say, if I want to extract an icon out of a stock Windows executable. I can get that icon ID by opening it in Visual Studio: 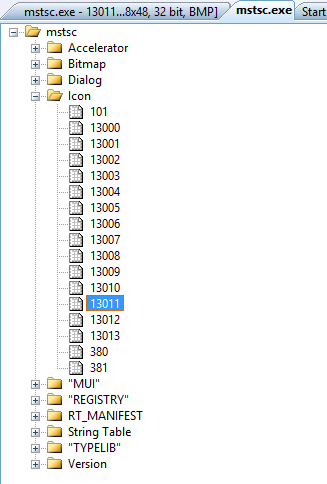 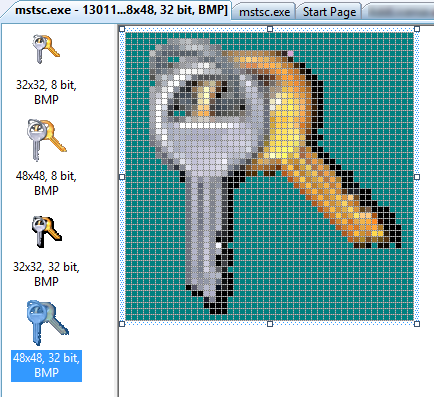 So my assumption was to do:

but when I run it, the method returns only 3 icons:

I then found ExtractAssociatedIconEx API that I called as such:

but that too gives me some other icon that I did not expect.

So what is the difference between those two APIs? And what am I doing wrong?

The ExtractIconEx function can return only two sizes of icons: large and small. Those are relative sizes, defined by the environment. A "large" icon is classically 32x32 pixels, but may be larger on certain system configurations. A "small" icon is classically 16x16 pixels, but the same caveat applies. The only guarantee is that a "small" icon is, well, smaller than a "large" icon. If you want to know the actual size on your system, you call the GetSystemMetrics function with SM_CXICON and SM_CYICON for "large" icons, or SM_CXSMICON and SM_CYSMICON for "small" icons.

The operating system uses "small" and "large" icons everywhere internally; most of the APIs deal only with "small" and "large" (also occasionally known as "big" icons). When you set an icon for a window, for example, you set either a "small" icon or a "big" icon. Those are your only two choices.

The ExtractAssociatedIcon function (and its Ex brother) returns only "large" icons. So you should be getting the same results when you call it as you do for the way that you call ExtractIconEx. I'm not really sure if you're saying that it is giving you different results or not. It might have something to do with the index. Negative indices mean something special to ExtractIconEx, but I'm not sure if they are valid for ExtractAssociatedIcon. The documentation doesn't give much of a hint.

The SHGetFileInfo function, although more powerful in a number of senses, including the ability to extract icons from any file-system object, has the same fundamental limitation: it gives you choices of SHGFI_LARGEICON and SHGFI_SMALLICON.

If you need to extract icons of custom sizes (i.e., something other than the system's "small" and "large" sizes), then you'll need to do more work. There are essentially two options:

You'll still need the SHGetFileInfo function here, but this time it will be to retrieve the index of the desired icon in the shell image list. Retrieve that with the SHGFI_SYSICONINDEX option.

As Raymond Chen blogged about some time ago, SHDefExtractIcon is your more powerful fallback if IExtractIcon::Extract (which is what the code sample above attempts to use) fails. The power of this function is its nIconSize parameter, which specifies the actual size of the icon that you want to extract.

Whatever you do, remember that whenever an API function returns an HICON, it is transferring ownership of that resource to you. This means that, when you are finished with the icon, you must destroy it by calling the DestroyIcon function to avoid a leak.

Not the answer you're looking for? Browse other questions tagged c++ windows winapi icons windows-shell or ask your own question.