I'm trying to include Alamofire in my Swift project following the github(https://github.com/Alamofire/Alamofire#cocoapods) instruction.

I've created a new project, navigated to the project directory and run this command sudo gem install cocoapods. Then I faced following error:

Now I generate a pod file by pod init and edited it this way:

Finally I run pod install to install Alamofire. After that I open the project and import Alamofire statement gives me following error No such module 'Alamofire'

Update-1: Results of pod install is:

Open the .xcworkspace not the .xcodeproj 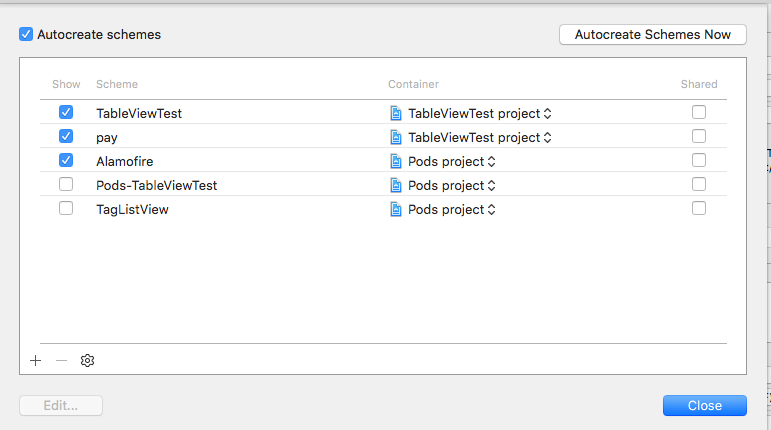 this work for me

I suggest you to change your pod file like this below:

Another thing is use_frameworks! you should use this if the project is Objective-C based and try to use Swift pod library.

UPDATE: for the new cocoapods version 1.x the shared library should be like this:

Sometimes with no reason xcode can't load a module Alamofire. It can happen after a work session, after opening a project. The fix for this is to select a schema -> Alamofire, and run. If the message is "Successful", the schema can be changed back to project and it will work with no problems.

you have to clean project and build, before you can import that library.

You should tap the Target to select Alamofire and build it once before coding.

I suggest that and it's work for me :

After that, run : pod install in your project repository

Not the answer you're looking for? Browse other questions tagged ios xcode swift cocoapods alamofire or ask your own question.

27
Alamofire No Such Module (CocoaPods)
0
Swift 3: How to implement Cocoapods into project?

235
Error: “The sandbox is not in sync with the Podfile.lock…” after installing RestKit with cocoapods
879
Xcode error “Could not find Developer Disk Image”
120
Cannot install cocoa pods after uninstalling, results in error
27
Alamofire No Such Module (CocoaPods)
89
Cocoapods + Cannot load underlying module for 'x'
318
Updating to latest version of CocoaPods?
1
Xcode 8 - Could not build module 'CoreFoundation' in ios10
2
Can't Install Cocoapods on macOS Sierra
1
Install Alamofire in Xcode 9 Swift 3 Watch app
0
No such Module Firebase