Imagine that I have a MainActivity that shows list of tasks. You can add new task to the list by clicking a standard FAB button. After this new WizardActivity starts. Adding new task is a 3 step process (each step is a single fragment): 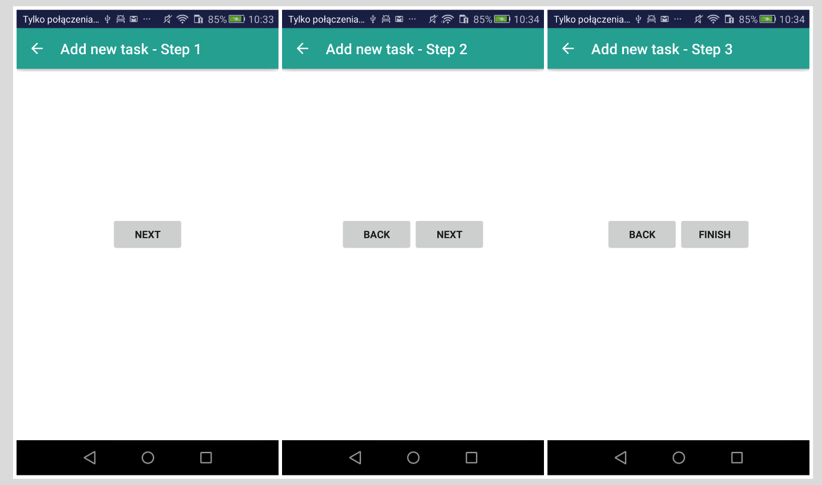 I need an advice about back button behavior as well as the back arrow in toolbar.

Let's say I'm in Step 2, what should I do on back pressed? Move to Step 1 or close activity? What's the best UX pattern here? Maybe I should remove additional BACK and NEXT buttons and move them to the Toolbar (kinda like on iOS)? I really want to do this right, so that everything was intuitive.

you can also consider to use the back button of device to navigate from step 3->step2->step1.

If you are in step1 only then close activity.

Also don't forget to save the instance of fragment in step1 and step2 so that when user go back to previous fragment to edit something he/she does not have to give data again.

Instead of using external Back/next button just put a next button to each of the fragment and let user choose to go back to the previous fragment using tab or pressing hardware back button.

Let's say I'm in Step 2, what should I do on back pressed? Move to Step 1 or close activity?

The Back button should always move Back, that is if on Step 2, move to Step 1 and if on Step 1 go to the view before Step 1 (probably closing the activity)

Maybe I should remove additional BACK and NEXT buttons and move them to the Toolbar (kinda like on iOS)?

I would advice against this. Android and iOS have their guidelines for a reason an they should (preferably) not be mixed. The idea is that if you have an Android device, most apps on that device should look and behave similar to make it easier to learn/use them. Mixing platforms will most likely confuse users that have not used both.

Not the answer you're looking for? Browse other questions tagged android android-layout android-fragments user-experience or ask your own question.

739
Standard Android Button with a different color
140
Fragment Inside Fragment
722
Best practice for instantiating a new Android Fragment
122
Problems with Android Fragment back stack
502
How to correctly save instance state of Fragments in back stack?
177
Switching between Android Navigation Drawer image and Up caret when using fragments
153
How to resume Fragment from BackStack if exists
0
Back button support in Android fragments
7
BottomNavigationView back button behavior should work like the Youtube App but crashes