I'm aware of the reason that git push --tags is a separate operation to plain old git push. Pushing tags should be a conscious choice since you don't want accidentally push one. That's fine. But is there a way to push both together? (Aside from git push && git push --tags.)

As mentioned originally in this answer by SoBeRich, and in my own answer, as of git 2.4.x

(Note: this actually work with HTTPS only with Git 2.24)

If set to true enable --follow-tags option by default.
You may override this configuration at time of push by specifying --no-follow-tags.

As noted in this thread by Matt Rogers answering Wes Hurd:

That would be pushed (as opposed to git tag <tagname>, a lightweight tag, which would not be pushed, as I mentioned here)

You can now try, when pushing new commits:

That won't push all the local tags though, only the one referenced by commits which are pushed with the git push.

The nuclear option would be git push --mirror, which will push all refs under refs/.

You can also push just one tag with your current branch commit:

You can combine the --tags option with a refspec like:

(since --tags means: All refs under refs/tags are pushed, in addition to refspecs explicitly listed on the command line)

I use .git/config to solve this:

With these lines added git push origin will upload all your branches and tags. If you want to upload only some of them, you can enumerate them.

Haven't tried it myself yet, but it looks like it might be useful until some other way of pushing branches and tags at the same time is added to git push.
On the other hand, I don't mind typing:

Beware, as commented by Aseem Kishore

push = +refs/heads/* will force-pushes all your branches.

This bit me just now, so FYI.

Let's say you have created a new repo on github. So the first step would be to clone the repo:git clone {Your Repo URL}

You do your work, add some files, code etc., then push your changes with:

Now our changes are in main branch. Let's create a tag:

If you want to delete the tag:

Just tested on git 2.31.0: git push <refspec> --tags. This has the advantage that it pushes ALL tags, not just annotated tags like --follow-tags. 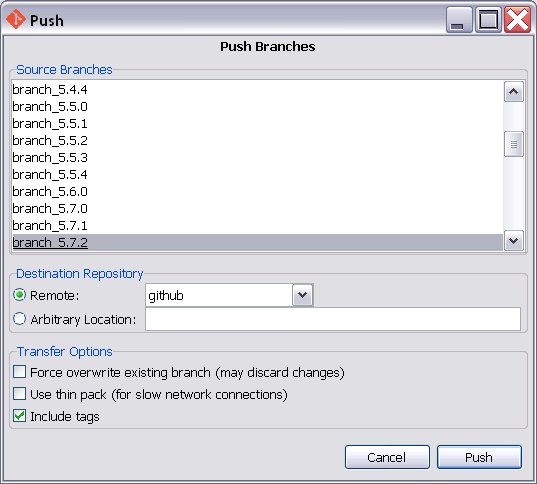 Git GUI has a PUSH button - pardon the pun, and the dialog box it opens has a checkbox for tags.

I pushed a branch from the command line, without tags, and then tried again pushing the branch using the --follow-tags option descibed above. The option is described as following annotated tags. My tags were simple tags.

When I did a similar push with Git GUI, the tags were sent.

For the time being, I am going to be pushing my changes to my remotes with Git GUI and not with the command line and --follow-tags.

796
How can I pull/push from multiple remote locations?
684
Push local Git repo to new remote including all branches and tags
215
Do git tags get pushed as well?
266
Difference between git checkout --track origin/branch and git checkout -b branch origin/branch
174
How to see remote tags?
44
How to make "git push" include tags within a branch?
19
Setting Git Tag from Azure Devops Build Pipeline on Complete
11
How To Import Tags Into Gitlab
12
Creating a git alias with a parameter
16
Why git doesn't push tags by default?
See more linked questions