Currently with Flash + RTMP I have a live video stream with < 1-2 second delay.

I've experimented with MPEG-DASH which seems to be the new industry standard for streaming but that came up short with 5 second delay being the best I could squeeze from it.

For context, I am trying to allow user's to control physical objects they can see on the stream, so anything above a couple of seconds of delay leads to a frustrating experience.

Are there any other techniques, or is there really no low latency html5 solutions for live streaming yet?

The only web-based technology set really geared toward low latency is WebRTC. It's built for video conferencing. Codecs are tuned for low latency over quality. Bitrates are usually variable, opting for a stable connection over quality.

However, you don't necessarily need this low latency optimization for all of your users. In fact, from what I can gather on your requirements, low latency for everyone will hurt the user experience. While your users in control of the robot definitely need low latency video so they can reasonably control it, the users not in control don't have this requirement and can instead opt for reliable higher quality video.

How to Set it Up 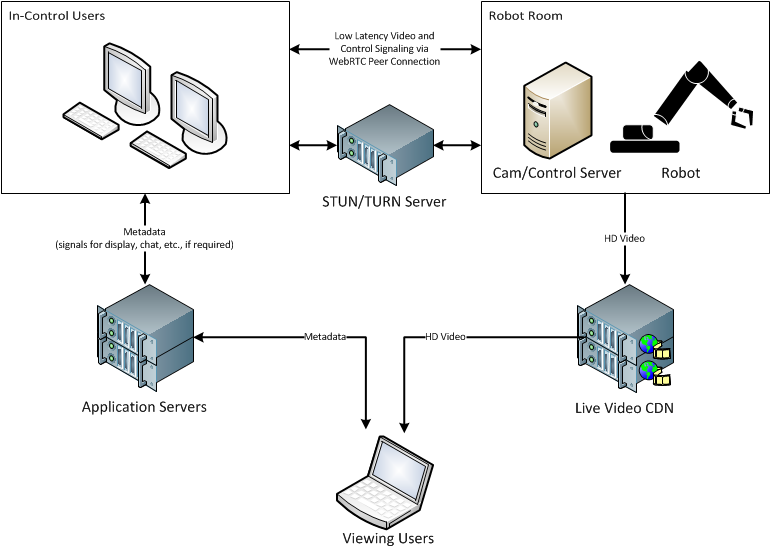 Users controlling the robot will load a page that utilizes some WebRTC components for connecting to the camera and control server. To facilitate WebRTC connections, you need some sort of STUN server. To get around NAT and other firewall restrictions, you may need a TURN server. Both of these are usually built into Node.js-based WebRTC frameworks.

The cam/control server will also need to connect via WebRTC. Honestly, the easiest way to do this is to make your controlling application somewhat web based. Since you're using Node.js already, check out NW.js or Electron. Both can take advantage of the WebRTC capabilities already built in WebKit, while still giving you the flexibility to do whatever you'd like with Node.js.

The in-control users and the cam/control server will make a peer-to-peer connection via WebRTC (or TURN server if required). From there, you'll want to open up a media channel as well as a data channel. The data side can be used to send your robot commands. The media channel will of course be used for the low latency video stream being sent back to the in-control users.

Again, it's important to note that the video that will be sent back will be optimized for latency, not quality. This sort of connection also ensures a fast response to your commands.

Users that are simply viewing the stream and not controlling the robot can use normal video distribution methods. It is actually very important for you to use an existing CDN and transcoding services, since you will have 10k-15k people watching the stream. With that many users, you're probably going to want your video in a couple different codecs, and certainly a whole array of bitrates. Distribution with DASH or HLS is easiest to work with at the moment, and frees you of Flash requirements.

You will probably also want to send your stream to social media services. This is another reason why it's important to start with a high quality HD stream. Those services will transcode your video again, reducing quality. If you start with good quality first, you'll end up with better quality in the end.

It isn't clear from your requirements what sort of metadata you need, but for small message-based data, you can use a web socket library, such as Socket.IO. As you scale this up to a few instances, you can use pub/sub, such as Redis, to distribution messaging throughout the servers.

To synchronize the metadata to the video depends a bit on what's in that metadata and what the synchronization requirement is, specifically. Generally speaking, you can assume that there will be a reasonable but unpredictable delay between the source video and the clients. After all, you cannot control how long they will buffer. Each device is different, each connection variable. What you can assume is that playback will begin with the first segment the client downloads. In other words, if a client starts buffering a video and begins playing it 2 seconds later, the video is 2 seconds behind from when the first request was made.

Detecting when playback actually begins client-side is possible. Since the server knows the timestamp for which video was sent to the client, it can inform the client of its offset relative to the beginning of video playback. Since you'll probably be using DASH or HLS and you need to use MCE with AJAX to get the data anyway, you can use the response headers in the segment response to indicate the timestamp for the beginning the segment. The client can then synchronize itself. Let me break this down step-by-step:

This should meet your needs and give you the flexibility to do whatever you need to with your video going forward.

There are tradeoffs in every approach. I think what I have outlined here separates the concerns and gives you the best tradeoffs in each area. Please feel free to ask for clarification or ask follow-up questions in the comments.

Not the answer you're looking for? Browse other questions tagged html video-streaming rtmp mpeg-dash or ask your own question.

172
jQuery and AJAX response header
17
RTMP vs RTSP/RTP: Which to choose for an interactive livestream?
11
Low Latency (50ms) Video Streaming with NODE.JS and html5
3
low-latency html5 video on a LAN
3
What's the best way to STREAM LIVE WEBCAM to SERVER and BACK TO THE WEB?
1
Config WebRTC android for the lowest latency
1
What is the latency of MPEG-DASH?
1
Azure MediaServices for live streaming - very long lag time
1
WebRTC two-to-many
0
Broadcasting solutions / encoders/ decoders
See more linked questions