How to run a cron job inside a docker container?

I am trying to run a cronjob inside a docker container that invokes a shell script.

Yesterday I have been searching all over the web and stack overflow, but I could not really find a solution that works.
How can I do this?

I've created a (commented) github repository with a working docker cron container that invokes a shell script at given interval.

You can copy your crontab into an image, in order for the container launched from said image to run the job.

See "Run a cron job with Docker" from Julien Boulay in his Ekito/docker-cron:

If you are wondering what is 2>&1, Ayman Hourieh explains.

The following Dockerfile describes all the steps to build your image

As noted by Nathan Lloyd in the comments:

Quick note about a gotcha:
If you're adding a script file and telling cron to run it, remember to
RUN chmod 0744 /the_script
Cron fails silently if you forget.

OR, make sure your job itself redirect directly to stdout/stderr instead of a log file, as described in hugoShaka's answer:

Replace the last Dockerfile line with

See also (about cron -f, which is to say cron "foreground") "docker ubuntu cron -f is not working"

Build and run it:

Be patient, wait for 2 minutes and your commandline should display:

Eric adds in the comments:

Do note that tail may not display the correct file if it is created during image build.
If that is the case, you need to create or touch the file during container runtime in order for tail to pick up the correct file.

See "Output of tail -f at the end of a docker CMD is not showing".

See more in "Running Cron in Docker" (Apr. 2021) from Jason Kulatunga, as he commented below

See Jason's image AnalogJ/docker-cron based on:

The adopted solution may be dangerous in a production environment.

In docker you should only execute one process per container because if you don't, the process that forked and went background is not monitored and may stop without you knowing it.

When you use CMD cron && tail -f /var/log/cron.log the cron process basically fork in order to execute cron in background, the main process exits and let you execute tailf in foreground. The background cron process could stop or fail you won't notice, your container will still run silently and your orchestration tool will not restart it.

You can avoid such a thing by redirecting directly the cron's commands output into your docker stdout and stderr which are located respectively in /proc/1/fd/1 and /proc/1/fd/2.

Using basic shell redirects you may want to do something like this :

For those who wants to use a simple and lightweight image:

Where cronjobs is the file that contains your cronjobs, in this form:

What @VonC has suggested is nice but I prefer doing all cron job configuration in one line. This would avoid cross platform issues like cronjob location and you don't need a separate cron file.

After running your docker container, you can make sure if cron service is working by:

If you prefer to have ENTRYPOINT instead of CMD, then you can substitute the CMD above with

There is another way to do it, is to use Tasker, a task runner that has cron (a scheduler) support.

Why ? Sometimes to run a cron job, you have to mix, your base image (python, java, nodejs, ruby) with the crond. That means another image to maintain. Tasker avoid that by decoupling the crond and you container. You can just focus on the image that you want to execute your commands, and configure Tasker to use it.

Here an docker-compose.yml file, that will run some tasks for you

There are 3 tasks there, all of them will run every minute (every: minute), and each of them will execute the script code, inside the image defined in image section.

Just run docker-compose up, and see it working. Here is the Tasker repo with the full documentation:

Though this aims to run jobs beside a running process in a container via Docker's exec interface, this may be of interest for you.

I've written a daemon that observes containers and schedules jobs, defined in their metadata, on them. Example:

Here are the docs, here's the image repository.

VonC's answer is pretty thorough. In addition I'd like to add one thing that helped me. If you just want to run a cron job without tailing a file, you'd be tempted to just remove the && tail -f /var/log/cron.log from the cron command.

However this will cause the Docker container to exit shortly after running because when the cron command completes, Docker thinks the last command has exited and hence kills the container. This can be avoided by running cron in the foreground via cron -f.

I created a Docker image based on the other answers, which can be used like

where /path/to/cron: absolute path to crontab file, or you can use it as a base in a Dockerfile:

For reference, the image is here.

Define the cronjob in a dedicated container which runs the command via docker exec to your service.

This is higher cohesion and the running script will have access to the environment variables you have defined for your service.

If you're using docker for windows, remember that you have to change your line-ending format from CRLF to LF (i.e. from dos to unix) if you intend on importing your crontab file from windows to your ubuntu container. If not, your cron-job won't work. Here's a working example:

This actually took me hours to figure out, as debugging cron jobs in docker containers is a tedious task. Hope it helps anyone else out there that can't get their code to work!

When you deploy your container on another host, just note that it won't start any processes automatically. You need to make sure that 'cron' service is running inside your container. In our case, I am using Supervisord with other services to start cron service.

Another route you can take is Ofelia, which is a highly configurable task runner image that allows 4 modes of execution.

The advantage here is that somebody else has done all the heavy lifting for you. Super convenient and easy.

It also has a spiffy official mascot. 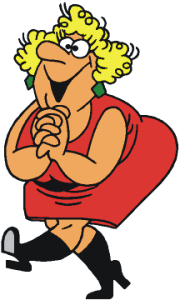 Setup a cron in parallel to a one-time job

Create a script file, say run.sh, with the job that is supposed to run periodically.

Use Entrypoint instead of CMD

f you have multiple jobs to kick in during docker containerization, use the entrypoint file to run them all.

Entrypoint file is a script file that comes into action when a docker run command is issued. So, all the steps that we want to run can be put in this script file.

For instance, we have 2 jobs to run:

Run once job: echo “Docker container has been started”

* * * * *: Cron schedule; the job must run every minute. You can update the schedule based on your requirement.

/run.sh: The path to the script file which is to be run periodically

/var/log/cron.log: The filename to save the output of the scheduled cron job.

2>&1: The error logs(if any) also will be redirected to the same output file used above.

Note: Do not forget to add an extra new line, as it makes it a valid cron. Scheduler.txt: the complete cron setup will be redirected to a file.

Then, this came up as a walkaround to this problem:

Last but not the least: Create a Dockerfile

That’s it. Build and Run the Docker image!

Unfortunately, none of the above answers worked for me, although all answers lead to the solution and eventually to my solution, here is the snippet if it helps someone. Thanks

This can be solved with the bash file, due to the layered architecture of the Docker, cron service doesn't get initiated with RUN/CMD/ENTRYPOINT commands.

If any other service is also required to run along with cron then add that service with & in the same command, for example: /opt/wildfly/bin/standalone.sh & service cron start & tail -f /var/log/cron-2.log

Once you will get into the docker container there you can see that testing cron.... will be getting printed every minute in file: /var/log/cron-1.log

From above examples I created this combination:

Here's my docker-compose based solution:

the lines with cron entries are on the ./conf/cron file.

Note: this won't run commands that aren't on the alpine image.

this line was the one that helped me run my pre-scheduled task.

When running on some trimmed down images that restrict root access, I had to add my user to the sudoers and run as sudo cron

Maybe that helps someone

Cron jobs are stored in /var/spool/cron/crontabs (Common place in all distros I Know). BTW, You can create a cron tab in bash using something like that:

So, my problem was the same. The fix was to change the command section in the docker-compose.yml.

The problem was the '&&' between the commands. After deleting this, it was all fine.

You can call the rake task inside lib/clock.rb file as below.

Create a separate container in docker-compose file & run the below command inside the container.

Not the answer you're looking for? Browse other questions tagged docker cron containers sh or ask your own question.