In new Firebase, how to use multiple config file in xcode?

Hey I am playing with the new firebase iOS SDK, in my project, I have only one target, I created two configurations, Debug and Release, with different bundler identifier， but seems like the config file downloaded from firebase only support one bundle identifier.

So anyone know how to use firebase within a multiple bundle identifier xcode project?

Updated with an easier solution:

My first attempt that didn't solve the issue:

I renamed the second GoogleService-Info.json to something else and used following code to configure Firebase from AppDelegate.

If I run the Staging target, I will receive Firebase's complaint about 'Could not locate configuration file: 'GoogleService-Info.plist'.'. But then it says '<FIRAnalytics/INFO> Firebase Analytics v.3300000 started'.

As I checked on the Firebase dashboard, both production and staging apps have incoming user events being logged.

The above-mentioned configureWithOptions method is not documented in Firebase documentation, I figured it out by checking its source code. I'm not sure about what could be the downside of calling this. I would love to hear other approaches.

I've implemented something similar, as I've had two schemes for a single target that have different bundle identifiers. In my examples below, I have two different schemes, one for UAT and one for PROD.

Create the two GoogleService-Info.json files, and put them into your project directory (not Xcode project) in different folders, e.g.

Then add the files to your Xcode project like so:

Now you need to add a Run Script in your Build Phases. This will need to be added before the Compile Sources stage:

This Run Script takes the appropriately located json file and duplicates it into the build app directory, meaning Firebase/Google will identify it identically to how it would identify the file in a single identifier setup.

I would estimate you can use this same logic for Google Analytics as well, which uses a similar json config file setup.

Better approach if you have single target is to just name your configs appropriately and load them as below. Seems to work fine for UAT environment example : Swift 3.0

Add both Google Service plists to your project, with different names:

Then for each Build Scheme, select Edit Scheme and add a unique value for an environment variable like so:

So the other build scheme's BUILD_FOR environment variable would be set to "DEV", for example.

Then, you would check for this variable in App Delegate and configure the FIRApp according to which scheme was built:

I did store 2 GoogleService-Info with different names:

And then go to Build Phases, add new run script:

Using Objective-C, in your AppDeletage.m:

I see a lot of responses using Targets, but if you want to differentiate by scheme you can go to:

Don't forget to change the PATH_TO_GOOGLE_PLISTS 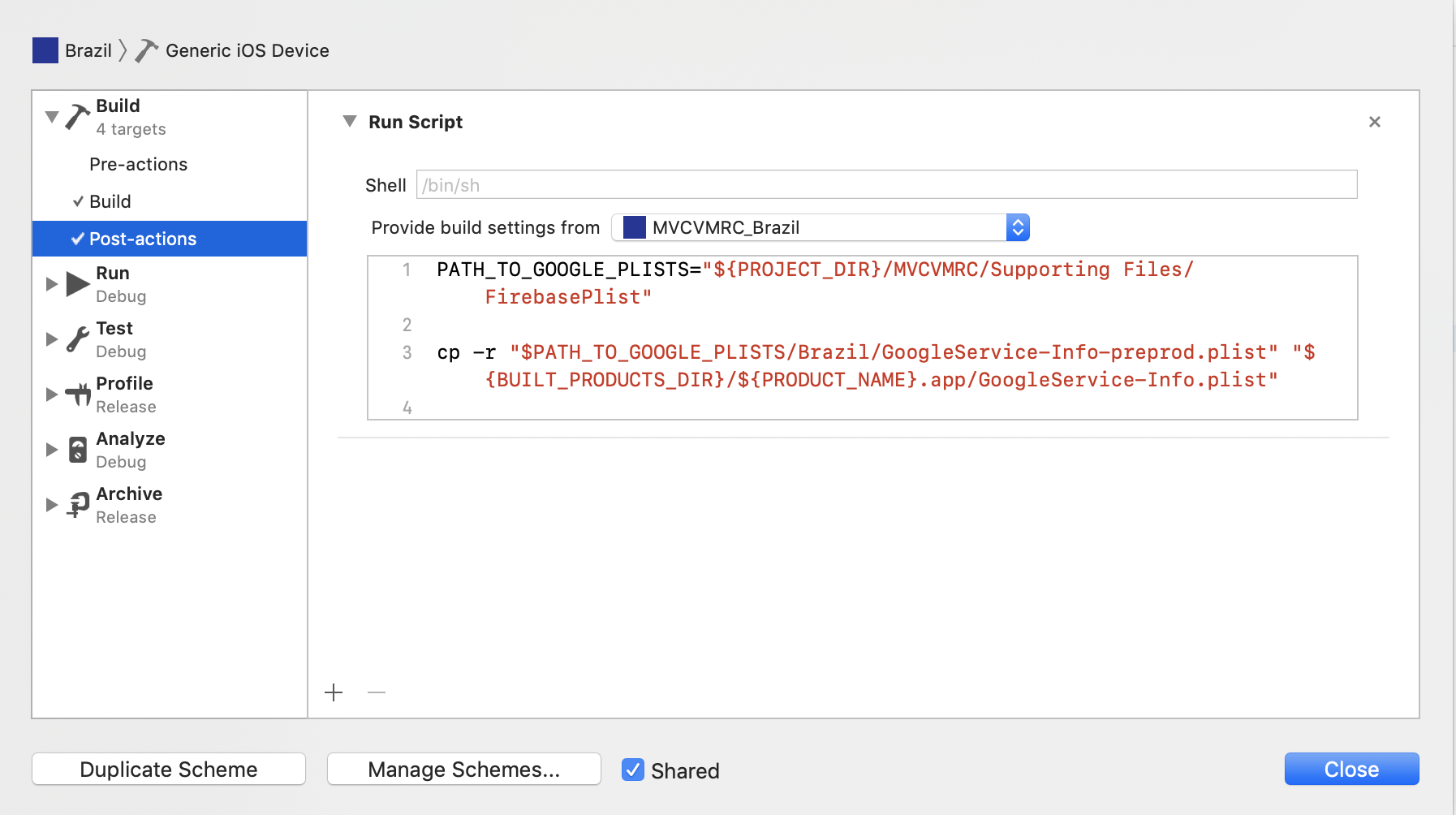 Firebase includes official documentation for how to do this now. I used this method in my app and it works great.

More specifically, I defined a custom Swift flag "BUILD_TYPE" in XCode and for each scheme, I define a unique value for that flag. Then, in my AppDelegate, I tell Firebase what GoogleService-___.plist file to load at runtime by this Swift flag value:

firebasePlistFileName variable is just fetching the PList name based on current configuration i.e. Development or Production.

For Swift 5, if you have different environnements, just do:

Not the answer you're looking for? Browse other questions tagged ios xcode firebase or ask your own question.

928
Git ignore file for Xcode projects
616
How can I indent multiple lines in Xcode?
1461
How to "add existing frameworks" in Xcode 4?
1364
How can I disable ARC for a single file in a project?
980
How to download Xcode DMG or XIP file?
258
How to run iPhone emulator WITHOUT starting Xcode?
57
How to add custom project configurations to Xcode when using CocoaPods?
210
"No such module" when using @testable in Xcode Unit tests
903
Xcode 10 Error: Multiple commands produce
272
Xcode 10: A valid provisioning profile for this executable was not found