I used node.js for a development project a few years ago, and this app is somewhat "mothballed" for the time being — it needs to stay online, it needs to stay secure, but it shouldn't need much attention. It is currently running on node.js v0.10.32, but I would now like invest in a "final" migration to a Long Term Support (LTS) release so it will be easier to maintain for the foreseeable future.

At first glance, the node.js homepage makes it look like v4.4.5 is obviously the only available LTS release:

However if I click that LTS schedule link, it tells a different story. As far as I can tell, version 6 of node.js is also slated to be an LTS release, with that support ending a full year later than version 4 will be.

Why would I bother upgrading to v4 instead of v6? Seems like v4 buys me one less year of security patches, but no additional compatibility guarantees?

With gratitude to jasnell and TheAlphaNerd who patiently answered my acerbic questions over on GitHub, here's my understanding of how node.js "long term support" releases are handled:

So they divide development into three distinct phases:

The CURRENT phase starts with the first public release, and starts the clock ticking on the 30-month support window. They may add significant new features, which should in theory be backwards-compatible but in practice may turn up some issues (new bug gets added, change made to poorly-defined behavior, they fix an old bug you had worked around poorly, etc.)

Then at some point the team decides to move the main development effort to a short-lived odd-numbered major branch (presumably when they need to intentionally break backwards compatibility). At that point the even-numbered branch moves to ACTIVE LTS and they get much more careful with the changes they make: primarily just bug fixes. So if you really want stability, this is the time to get "on board" with a particular release.

Eventually it moves even further to the MAINTENANCE phase, where the code is touched only in response to the most critical bugs (think: security patches). But by then there's probably a new release in LTS "phase" already.

So the choice on the homepage right now is between two even-numbered branches, "v4.4.5 LTS" and "v6.2.0 current". If the newer branch were odd-numbered then it would not be a good candidate for a production deploy where long-term support is desired.

My actual options are a bit more complex even: 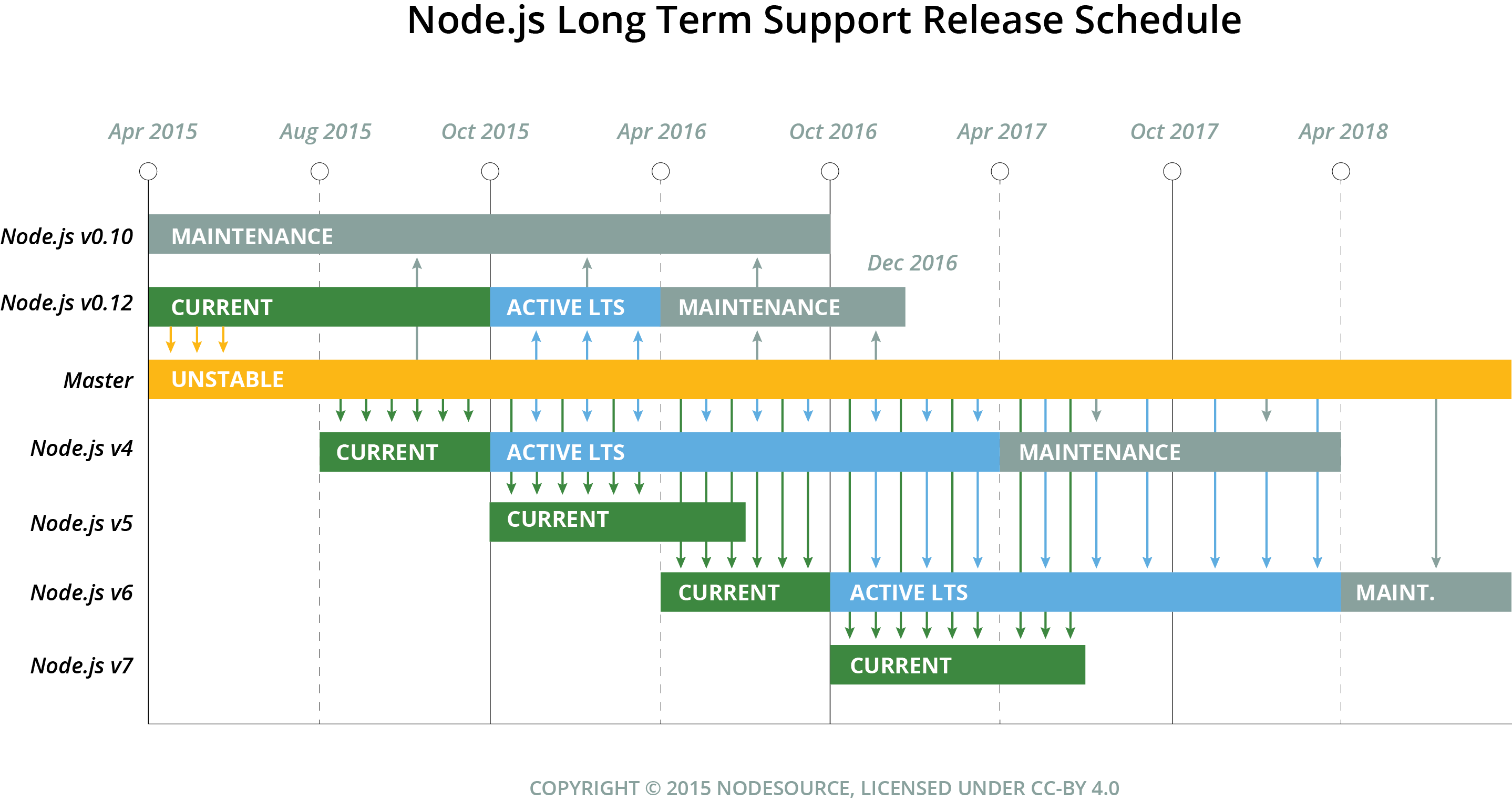 I could simply stay on v0.10 which will get critical fixes until October. Or bump up to v0.12 to get those until the end of the year. But neither one of those gains me much, and so I'll rule them out.

I can deploy v4.4.5 which will is still getting general bug fixes right now, and will get security fixes for quite a while yet. This should give me the most stable install. The support cycle is getting to be halfway over already, though — and when it runs out I'll have missed this opportunity now to catch up with some of the major changes that have already happened in v5 and v6.

I am leaning towards deploying v6.2.0, assuming all my dependencies support it right now. This not only buys me a year longer term of "lifecyle remaining", but also gets me fully caught up with any breaking changes that were introduced between v0.10 and now. (It also gets me access to any useful new features — but in this case I don't have a chance to take advantage of it.) The risk I take is that when I update to any hypothetical v6.2.1 or v6.3.0 or beyond that comes along, it might accidentally yield some bad surprises.

In my case I'd rather deal now with the major intentional changes that v5 and v6 have already introduced, and then hopefully be all set (or at least only minor pain) from now all the way until April 2019.

Not the answer you're looking for? Browse other questions tagged node.js version or ask your own question.

367
Folder structure for a Node.js project
441
Why does Node.js' fs.readFile() return a buffer instead of string?
286
Node.js EACCES error when listening on most ports
683
How do you prevent install of “devDependencies” NPM modules for Node.js (package.json)?
425
Is there a way to automatically build the package.json file for Node.js projects
62
NVM & Node.js - Recommended install for all users
518
How can I wait In Node.js (JavaScript)? l need to pause for a period of time
734
Node.js quick file server (static files over HTTP)
998
Node.js/Windows error: ENOENT, stat 'C:\Users\RT\AppData\Roaming\npm'