Most idiomatic way to select elements from an array in Golang?

I have an array of strings, and I'd like to exclude values that start in foo_ OR are longer than 7 characters.

I can loop through each element, run the if statement, and add it to a slice along the way. But I was curious if there was an idiomatic or more golang-like way of accomplishing that.

Just for example, the same thing might be done in Ruby as

There is no one-liner as you have it in Ruby, but with a helper function you can make it almost as short.

Here's our helper function that loops over a slice, and selects and returns only the elements that meet a criteria captured by a function value:

Using this helper function your task:

Output (try it on the Go Playground):

If it is expected that many elements will be selected, it might be profitable to allocate a "big" ret slice beforehand, and use simple assignment instead of the append(). And before returning, slice the ret to have a length equal to the number of selected elements.

Have a look at robpike's filter library. This would allow you to do:

Interestingly enough the README.md by Rob:

I wanted to see how hard it was to implement this sort of thing in Go, with as nice an API as I could manage. It wasn't hard. Having written it a couple of years ago, I haven't had occasion to use it once. Instead, I just use "for" loops. You shouldn't use it either.

So the most idiomatic way according to Rob would be something like:

This style is very similar, if not identical, to the approach any C-family language takes.

Today, I stumbled on a pretty idiom that surprised me. If you want to filter a slice in place without allocating, use two slices with the same backing array:

There are a couple of nice ways to filter a slice without allocations or new dependencies. Found in the Go wiki on Github:

And another, more readable, way:

This trick uses the fact that a slice shares the same backing array and capacity as the original, so the storage is reused for the filtered slice. Of course, the original contents are modified.

For elements which must be garbage collected, the following code can be included afterwards:

One thing I'm not sure about is whether the first method needs clearing (setting to nil) the items in slice a after index n, like they do in the second method.

EDIT: the second way is basically what MicahStetson described in his answer. In my code I use a function similar to the following, which is probably as good as it gets in terms on performance and readability:

Note that if items in your slice are not pointers and don't contain pointers you can skip the second for loop.

There isn't an idiomatic way you can achieve the same expected result in Go in one single line as in Ruby, but with a helper function you can obtain the same expressiveness as in Ruby.

You can call this helper function as:

Here is the whole code:

And the running example: Playground

"Select Elements from Array" is also commonly called a filter function. There's no such thing in go. There are also no other "Collection Functions" such as map or reduce. For the most idiomatic way to get the desired result, I find https://gobyexample.com/collection-functions a good reference:

[...] in Go it’s common to provide collection functions if and when they are specifically needed for your program and data types.

They provide an implementation example of the filter function for strings:

However, they also say, that it's often ok to just inline the function:

Note that in some cases it may be clearest to just inline the collection-manipulating code directly, instead of creating and calling a helper function.

In general, golang tries to only introduce orthogonal concepts, meaning that when you can solve a problem one way, there shouldn't be too many more ways to solve it. This adds simplicity to the language by only having a few core concepts, such that not every developer uses a different subset of the language.

Take a look at this library: github.com/thoas/go-funk It provides an implementation of a lot of life-saving idioms in Go (including filtering of elements in array for instance).

Here is an elegant example of both Fold and Filter that uses recursion to accomplish filtering. FoldRight is also generally useful. It is not stack safe but could be made so with trampolining. Once Golang has generics it can be entirely generalized for any 2 types:

you can use the loop as you did and wrap it to a utils function for reuse.

For multi-datatype support, copy-paste will be a choice. Another choice is writing a generating tool.

And final option if you want to use lib, you can take a look on https://github.com/ledongthuc/goterators#filter that I created to reuse aggregate & transform functions. 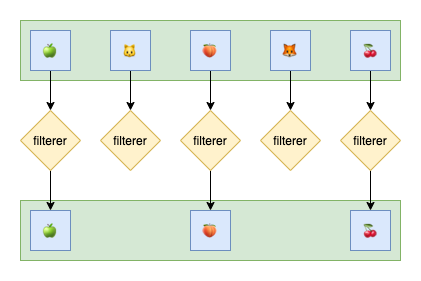 It requires the Go 1.18 to use that support generic + dynamic type you want to use with.

It also supports Reduce in case you want to optimize the way you select. Hope it's useful with you!

The DOC currently are located in wiki section of the project. You can try it in this link. I hope you like it...

Not the answer you're looking for? Browse other questions tagged arrays go slice or ask your own question.