How to honor the “Regional format” setting in UWP Apps

I want to format dates and numbers according to the "Regional format" setting the user configured in Windows 10. With WPF this was no problem. With UWP this seems to impossible without resorting to hacks.

Sample code to experiment with.

I stared a new question because the best similar one is 3 years old without an accepted answer.

The "Regional format" is a Windows setting the user can configure independent of the language and region. E.g. the user can have configured: 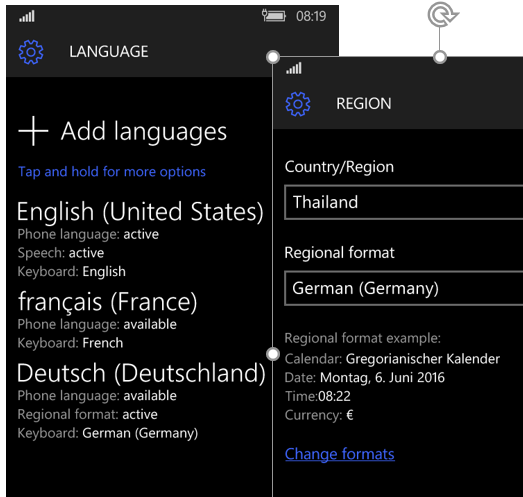 MS seems to want us using UserProfile.GlobalizationPreferences, but this does not expose the active "Regional format". There is an MS statement "It is intentional. Microsoft is moving away from forcing applications to be in the language of the OS..." in the question mentioned above. We never had a problem creating apps in a language different from the OS. And this does not explain how to honor the users choice in an UWP app.

I read all posts I could find about this and the only solution seems to be the following hack described here:

What MS seems to suggest does not work for me and my customers complain about my apps not honoring their settings.

Can someone shed some light into this? If this is an SDK bug, it should have been fixed long ago.

The built-in Calendar UWP app does honor the regional format.

localization uwp
share|improve this question
edited May 23 '17 at 12:24

Browse other questions tagged localization uwp or ask your own question.

21
WinRT apps and Regional settings. The correct way to format dates and numbers based on the user's regional settings?
2
Regional format and language in Windows Phone 10 UWP app

1
Ho to get month/weekday symbols from NSDateFormatter in current language (iPhone)
72
manual language selection in an iOS-App (iPhone and iPad)
3
NSDateFormatter: Only show localized dates if app is localized for the language
2
How to use correct regional format (date & time) of Windows Phone 8.1
2
How to format a date/time value according to the system's regional format on Windows Phone 8.1?
0
Purpose of `region` settings in ios for DateFormatters
1
While I've set Windows to French Regional format and comma as a decimal symbol, the UWP CurrencyFormatter still displays a dot
0
How to set UWP language on runtime
1
UWP dates aren't respecting local region's date format