What is OAuth and how does it secure REST API calls? [closed]

Ask Question
Asked 5 years, 11 months ago
Modified 5 months ago
Viewed 39k times
18
Closed. This question needs to be more focused. It is not currently accepting answers.

I have mobile application REST API calls which hits to my server without any token or security mechanisam.

I want to secure my API calls. I am trying to understand what is OAuth and how it will secure my mobile app REST API calls which are hitting to my server?

Also I want to know in details about the below fields which are used in OAuth . From where I will get below fields.

Since most of providers use OAuth 2.0 and OAuth 1.0 has been deprecated by major providers, I will explain OAuth2.0

OAuth is an open standard for authorization, commonly used as a way for Internet users to log in to third party websites using their Microsoft, Google, Facebook, Twitter, One Network etc. accounts without exposing their password.

you can implement your own OAuth server, here I am explaining about social auth. so the term OAuth here after refers to social auth with OAuth.

The below terms have nothing to do with OAuth but are used with OAuth to make it more secure. 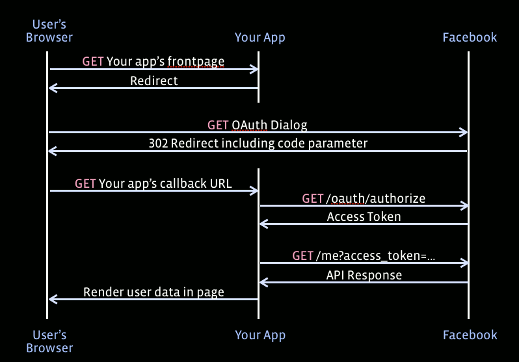 I will explain the diagram with Facebook login as an example.

Background; consider you have done the below, before explaining the diagram:

Now, How does this secure your api?

Make the portions which need security as login required to access them. if the client who makes the request is not logged in to your api, send him to step 2 of the diagram.

So what is nonce? timestamp?

If someone steal an access token, he can get access to API server as long as the access token expires. So when the user requests a page, server sends him back a nonce which is stored in the server. the client signs the request with the recieved nonce and complete the request. as the nonce is only used once, server deletes the nonce. when an attacker grabs the nonce, and make a fake request to the server,server rejects the request as the one time number is invalid as its used already.

Not the answer you're looking for? Browse other questions tagged api rest authentication oauth oauth-2.0 or ask your own question.

234
Security of REST authentication schemes
5982
What is the difference between POST and PUT in HTTP?
1090
What's the difference between OpenID and OAuth?
775
Why Does OAuth v2 Have Both Access and Refresh Tokens?
650
How is OAuth 2 different from OAuth 1?
81
How to keep the OAuth consumer secret safe, and how to react when it's compromised?
284
OAuth 2.0: Benefits and use cases — why?
603
JWT (JSON Web Token) automatic prolongation of expiration
513
What are the main differences between JWT and OAuth authentication?