My issue sounds familiar but it can't be since that issue appears to be fixed. However, I have set a breakpoint in a class coming from a dependency (via maven). The source code got downloaded but as the program reaches the line all I get to see is

I've tried to add lookup paths by clicking at "Edit Source Lookup Path..." but nothing changed. I don't know what I have to add such that the debugger finds the sources.

It appears that this stopped working for all my dependencies.

How did I break my source lookups and how can I fix it?

I am running my tomcat from a maven build these goals:

but this hasn't been a problem so far.

Further, none of my maven dependencies e.g. gwt-user*.jar or `spring*.jar or anything are listed in the Source Lookup Path. There is only the "Default" path which doesn't contain it either - shouldn't those jars be somewhat listed there? 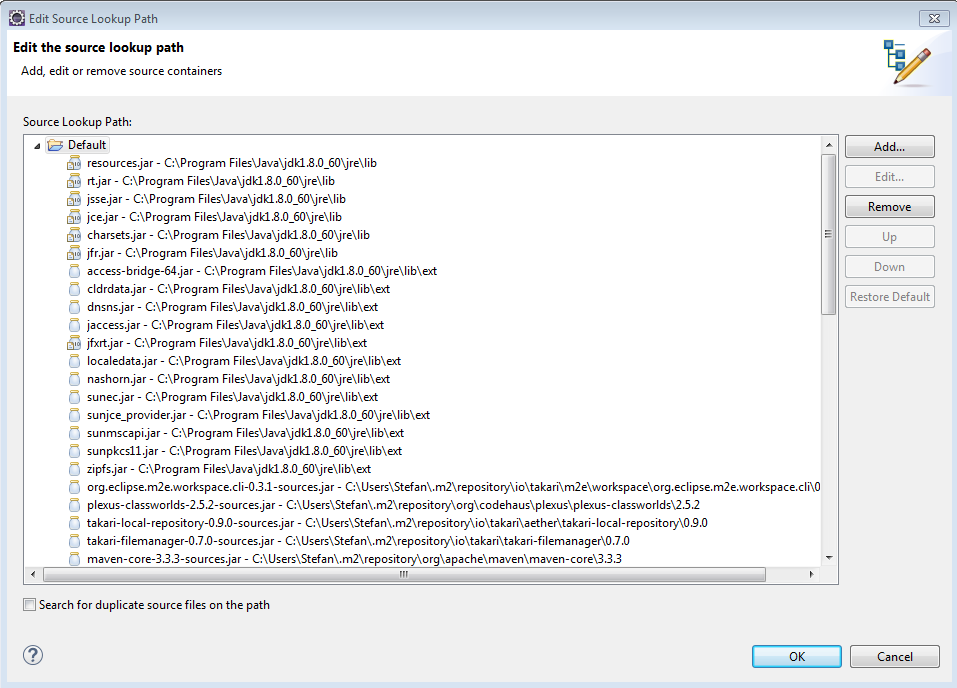 After downloading Eclipse Mars 2, removing my project completely and re-importing it without any .settings, .project or .classpath files, I am still seeing this problem. I can't tell if this is really an Eclipse bug but at this point I don't know what else it could be.

I also tried removing C:\Users\<username>\.eclipse and restarted the IDE without different results.

I don't know what the actual problem was and why it stopped working. As you can take out of my question I actually downloaded a clean version of Eclipse, checked out the naked project and imported it with maven without results.

However, I found this com.ifedorenko.m2e.sourcelookup plugin. The link was provided in "Java Debugging: Source not found".

Go to Help > Install New Software .. and use

to search for the links. After installing this plugin I was finally able to debug the source code of dependencies.

After that press 'OK' on all dialogs and relaunch debug process.

Not the answer you're looking for? Browse other questions tagged eclipse maven or ask your own question.

176
Get source jar files attached to Eclipse for Maven-managed dependencies
739
How can I show line numbers in Eclipse?
1883
“Debug certificate expired” error in Eclipse Android plugins
717
Differences between dependencyManagement and dependencies in Maven
542
IntelliJ inspection gives “Cannot resolve symbol” but still compiles code
21
Eclipse not picking up Maven attached source on debug
66
How to download sources for a jar with Maven?
27
Maven not downloading dependencies in Eclipse
0
m2eclipse downloads source, but in eclipse I do not see a source attachment