How to install unlimited strength JCE for Java 8 in OS X?

I need to install the Java Cryptography Extension for Java 8 in OS X / mac OS. It turns out the steps from the README file which came with the installer include instructions only for Unix and Windows, but not for OS X / mac OS. I tried to put the JAR files in $JAVA_HOME/lib/security, but it didn't work either. Do you know how can I install them?

As pointed out in another answer and in Oracle's release notes for Java 8 Update 161, unlimited cryptography is enabled by default since Update 161 and you shouldn't have to do anything if using a fresh installation of this version or higher.

It's probably a good idea to remove the old policy JAR's if they were added earlier, as Oracle states in the release notes:

Because the old JCE jurisdiction files are left in /lib/security, they may not meet the latest security JAR signing standards, which were refreshed in 6u131, 7u121, 8u111, and later updates.

Answers suggesting to install the JCE files via Homebrew won't work anymore, as the casks were deleted from the Homebrew repository after release of the Java 8 Update 151. If using an older version of Java 8, you'll have to put the JCE-Policy-JAR manually as described in another answer.

Note: As of Java JDK version 8u161 unlimited cryptography is enabled by default

If you are MacOS user, put the jars extracted from jce_policy-8.zip if your java version is 8.* use below path (to put jars under it)

As of Java 8u152, unlimited strength can be enabled simply by setting crypto.policy=unlimited in the java.security file in

It's already in that file but commented out. 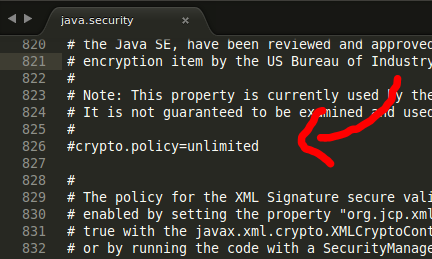 As of JDK 1.8u151 it is not necessary to download the JCE libraries separately. Simply edit

and uncomment the line:

This will enable the unlimited strength JCE.

As of Java JDK version 8u161 unlimited cryptography is enabled by default and the other suggested methods should no longer be necessary (unless you want to disable it).

This change also appears to be included in other major JDK versions from JDK 6 to JDK 9.

As you did not explain what is your problem here some guesses.

If all of those steps would have been true, then you would have found

You can assume that the location on OSX is the same as for the listed systems.

For later versions of macOS (e.g., Sierra), Oracle Java is installed in two locations depending on if you install the JRE or JDK.

The JRE allows you to double-click to open jars from the Finder and run Java in the browser. The JRE does not come with the java binary, so if you want to run any of the typical Java commands, you must install the JDK. More at https://java.com/en/download/faq/yosemite_java.xml.

All this to say, when installing then unlimited strength JCE files, install them in both directories listed above to get consistent behavior.

if you're a windows user:

Not the answer you're looking for? Browse other questions tagged java macos jce or ask your own question.

29
How do you read a password protected excel file into r?
0
Caused by: java.lang.SecurityException: The jurisdiction policy files are not signed by the expected signer！
1
Local encryption and decryption of data
1
Jose4j validate signature alg RS256 against encryption algorithm

3707
How do I efficiently iterate over each entry in a Java Map?
2501
How do I call one constructor from another in Java?
4467
How do I read / convert an InputStream into a String in Java?
3874
How do I generate random integers within a specific range in Java?
2516
How do I determine whether an array contains a particular value in Java?
172
How to avoid installing "Unlimited Strength" JCE policy files when deploying an application?
3326
How do I convert a String to an int in Java?
3538
How can I create a memory leak in Java?
1672
How do I install pip on macOS or OS X?
1204
How to install Java 8 on Mac