How can I perform two-dimensional interpolation using scipy?

I've found the scipy.interpolate sub-package, but I keep getting errors when using interp2d or bisplrep or griddata or rbf. What is the proper syntax of these methods?

Disclaimer: I'm mostly writing this post with syntactical considerations and general behaviour in mind. I'm not familiar with the memory and CPU aspect of the methods described, and I aim this answer at those who have reasonably small sets of data, such that the quality of the interpolation can be the main aspect to consider. I am aware that when working with very large data sets, the better-performing methods (namely griddata and Rbf) might not be feasible.

The two interpolation tasks will be

Here's how they look: 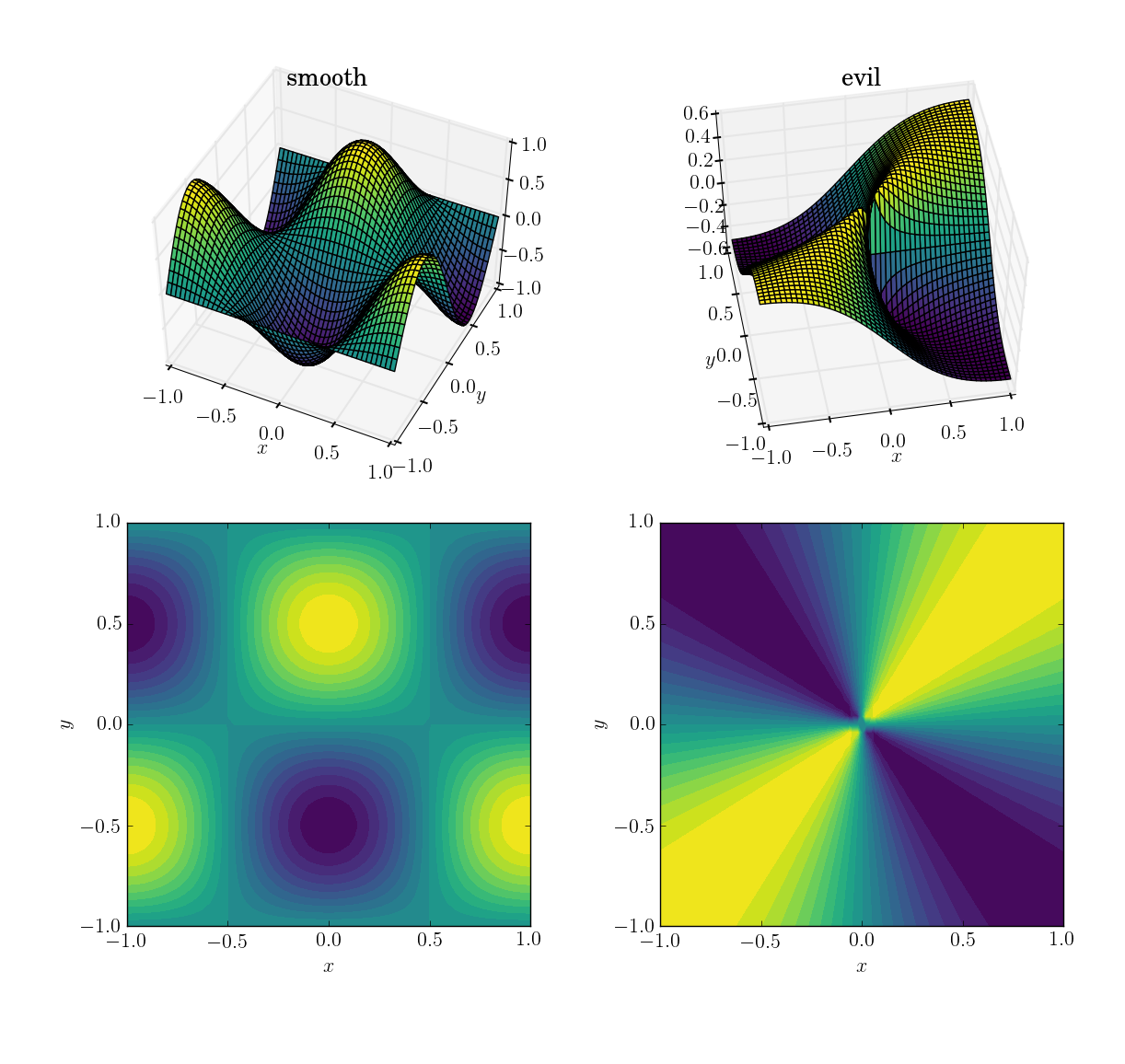 I will first demonstrate how the three methods behave under these four tests, then I'll detail the syntax of all three. If you know what you should expect from a method, you might not want to waste your time learning its syntax (looking at you, interp2d).

For the sake of explicitness, here is the code with which I generated the input data. While in this specific case I'm obviously aware of the function underlying the data, I will only use this to generate input for the interpolation methods. I use numpy for convenience (and mostly for generating the data), but scipy alone would suffice too.

Let's start with the easiest task. Here's how an upsampling from a mesh of shape [6,7] to one of [20,21] works out for the smooth test function:

Even though this is a simple task, there are already subtle differences between the outputs. At a first glance all three outputs are reasonable. There are two features to note, based on our prior knowledge of the underlying function: the middle case of griddata distorts the data most. Note the y==-1 boundary of the plot (nearest the x label): the function should be strictly zero (since y==-1 is a nodal line for the smooth function), yet this is not the case for griddata. Also note the x==-1 boundary of the plots (behind, to the left): the underlying function has a local maximum (implying zero gradient near the boundary) at [-1, -0.5], yet the griddata output shows clearly non-zero gradient in this region. The effect is subtle, but it's a bias none the less. (The fidelity of Rbf is even better with the default choice of radial functions, dubbed multiquadratic.)

A bit harder task is to perform upsampling on our evil function:

Clear differences are starting to show among the three methods. Looking at the surface plots, there are clear spurious extrema appearing in the output from interp2d (note the two humps on the right side of the plotted surface). While griddata and Rbf seem to produce similar results at first glance, the latter seems to produce a deeper minimum near [0.4, -0.4] that is absent from the underlying function.

Most often one wants to perform interpolation on scattered data. For this reason I expect these tests to be more important. As shown above, the sample points were chosen pseudo-uniformly in the domain of interest. In realistic scenarios you might have additional noise with each measurement, and you should consider whether it makes sense to interpolate your raw data to begin with.

Output for the smooth function:

Now there's already a bit of a horror show going on. I clipped the output from interp2d to between [-1, 1] exclusively for plotting, in order to preserve at least a minimal amount of information. It's clear that while some of the underlying shape is present, there are huge noisy regions where the method completely breaks down. The second case of griddata reproduces the shape fairly nicely, but note the white regions at the border of the contour plot. This is due to the fact that griddata only works inside the convex hull of the input data points (in other words, it doesn't perform any extrapolation). I kept the default NaN value for output points lying outside the convex hull.2 Considering these features, Rbf seems to perform best.

And the moment we've all been waiting for:

It's no huge surprise that interp2d gives up. In fact, during the call to interp2d you should expect some friendly RuntimeWarnings complaining about the impossibility of the spline to be constructed. As for the other two methods, Rbf seems to produce the best output, even near the borders of the domain where the result is extrapolated.

So let me say a few words about the three methods, in decreasing order of preference (so that the worst is the least likely to be read by anybody).

The Rbf class stands for "radial basis functions". To be honest I've never considered this approach until I started researching for this post, but I'm pretty sure I'll be using these in the future.

Just like the spline-based methods (see later), usage comes in two steps: first one creates a callable Rbf class instance based on the input data, and then calls this object for a given output mesh to obtain the interpolated result. Example from the smooth upsampling test:

Note that both input and output points were 2d arrays in this case, and the output z_dense_smooth_rbf has the same shape as x_dense and y_dense without any effort. Also note that Rbf supports arbitrary dimensions for interpolation.

My former favourite, griddata, is a general workhorse for interpolation in arbitrary dimensions. It doesn't perform extrapolation beyond setting a single preset value for points outside the convex hull of the nodal points, but since extrapolation is a very fickle and dangerous thing, this is not necessarily a con. Usage example:

Note the slightly kludgy syntax. The input points have to be specified in an array of shape [N, D] in D dimensions. For this we first have to flatten our 2d coordinate arrays (using ravel), then concatenate the arrays and transpose the result. There are multiple ways to do this, but all of them seem to be bulky. The input z data also have to be flattened. We have a bit more freedom when it comes to the output points: for some reason these can also be specified as a tuple of multidimensional arrays. Note that the help of griddata is misleading, as it suggests that the same is true for the input points (at least for version 0.17.0):

The only reason I'm discussing interp2d and its relatives is that it has a deceptive name, and people are likely to try using it. Spoiler alert: don't use it (as of scipy version 0.17.0). It's already more special than the previous subjects in that it's specifically used for two-dimensional interpolation, but I suspect this is by far the most common case for multivariate interpolation.

As far as syntax goes, interp2d is similar to Rbf in that it first needs constructing an interpolation instance, which can be called to provide the actual interpolated values. There's a catch, however: the output points have to be located on a rectangular mesh, so inputs going into the call to the interpolator have to be 1d vectors which span the output grid, as if from numpy.meshgrid:

One of the most common mistakes when using interp2d is putting your full 2d meshes into the interpolation call, which leads to explosive memory consumption, and hopefully to a hasty MemoryError.

Now, the greatest problem with interp2d is that it often doesn't work. In order to understand this, we have to look under the hood. It turns out that interp2d is a wrapper for the lower-level functions bisplrep+bisplev, which are in turn wrappers for FITPACK routines (written in Fortran). The equivalent call to the previous example would be

Now, here's the thing about interp2d: (in scipy version 0.17.0) there is a nice comment in interpolate/interpolate.py for interp2d:

and indeed in interpolate/fitpack.py, in bisplrep there's some setup and ultimately

And that's it. The routines underlying interp2d are not really meant to perform interpolation. They might suffice for sufficiently well-behaved data, but under realistic circumstances you will probably want to use something else.

1I'm fairly certain that the cubic and linear kind of basis functions of Rbf do not exactly correspond to the other interpolators of the same name.
2These NaNs are also the reason for why the surface plot seems so odd: matplotlib historically has difficulties with plotting complex 3d objects with proper depth information. The NaN values in the data confuse the renderer, so parts of the surface that should be in the back are plotted to be in the front. This is an issue with visualization, and not interpolation.

Not the answer you're looking for? Browse other questions tagged python scipy interpolation or ask your own question.