What is a projection layer in the context of neural networks?

I am currently trying to understand the architecture behind the word2vec neural net learning algorithm, for representing words as vectors based on their context.

After reading Tomas Mikolov paper I came across what he defines as a projection layer. Even though this term is widely used when referred to word2vec, I couldn't find a precise definition of what it actually is in the neural net context. 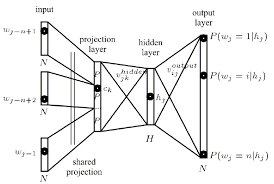 My question is, in the neural net context, what is a projection layer? Is it the name given to a hidden layer whose links to previous nodes share the same weights? Do its units actually have an activation function of some kind?

 Another resource that also refers more broadly to the problem can be found in this tutorial, which also refers to a projection layer around page 67.

I find the previous answers here a bit overcomplicated - a projection layer is just a simple matrix multiplication, or in the context of NN, a regular/dense/linear layer, without the non-linear activation in the end (sigmoid/tanh/relu/etc.) The idea is to project the (e.g.) 100K-dimensions discrete vector into a 600-dimensions continuous vector (I chose the numbers here randomly, "your mileage may vary"). The exact matrix parameters are learned through the training process.

What happens before/after already depends on the model and context, and is not what OP asks.

(In practice you wouldn't even bother with the matrix multiplication (as you are multiplying a 1-hot vector which has 1 for the word index and 0's everywhere else), and would treat the trained matrix as a lookout table (i.e. the 6257th word in the corpus = the 6257th row/column (depends how you define it) in the projection matrix).)

The projection layer maps the discrete word indices of an n-gram context to a continuous vector space.

As explained in this thesis 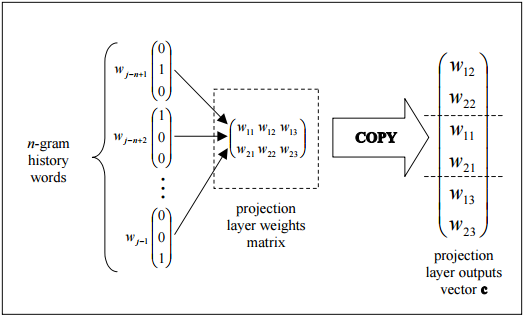 The hidden layer processes the output of the projection layer and is also created with a number of neurons specified in the topology configuration file.

Edit: An explanation of what is happening in the diagram

Each neuron in the projection layer is represented by a number of weights equal to the size of the vocabulary. The projection layer differs from the hidden and output layers by not using a non-linear activation function. Its purpose is simply to provide an efficient means of projecting the given n- gram context onto a reduced continuous vector space for subsequent processing by hidden and output layers trained to classify such vectors. Given the one-or-zero nature of the input vector elements, the output for a particular word with index i is simply the ith column of the trained matrix of projection layer weights (where each row of the matrix represents the weights of a single neuron).

The continuous bag of words is used to predict a single word given its prior and future entries: thus it is a contextual result.

The inputs are the computed weights from the prior and future entries: and all are given new weights identically: thus the complexity / features count of this model is much smaller than many other NN architectures.

RE: what is the projection layer: from the paper you cited

So the projection layer is a single set of shared weights and no activation function is indicated.

So the hidden layer is in fact represented by this single set of shared weights - as you correctly implied that is identical across all of the input nodes.

Not the answer you're looking for? Browse other questions tagged machine-learning nlp neural-network word2vec or ask your own question.

-2
Writing code for A Neural Probabilistic Language Model Bengio, 2003. Not able to understand the model

14
Continuous vs Discrete artificial neural networks
10
Does Word2Vec has a hidden layer?
328
Extremely small or NaN values appear in training neural network
2
What does Non-Linearity of Deep Neural Networks means?