I am using gravatars and it's rather often when I downscale them with css, and I believe Google Chrome used to do it properly until recently ( I may be wrong, not sure when exactly the problem started to occur ) but now, images get blurred when downscaled, and that happens only in Chrome, FF downscales pretty good. I tried using image-rendering but it doesn't solve the problem. Can someone give me a hint what is the best way to go about it?

The example can be found here, open it in Chrome and then in FF, it should be way more blurred in Chrome than in FF.

I found the exact same issue on Mac: Firefox downscales the image really well, while Chrome makes it look blurry, which is very bad. I couldn't care less about rendering time or speed, I need the logo to look GOOD!

I found the following CSS rule fixing Chrome for Mac

It seems that transform: translateZ(0); does not work anymore.
The only property I found which had any effect was image-rendering: -webkit-optimize-contrast; (note: this has a much different effect on iOS safari, where it makes the image very pixelated, so you'll only want to enable it on chrome and edge) 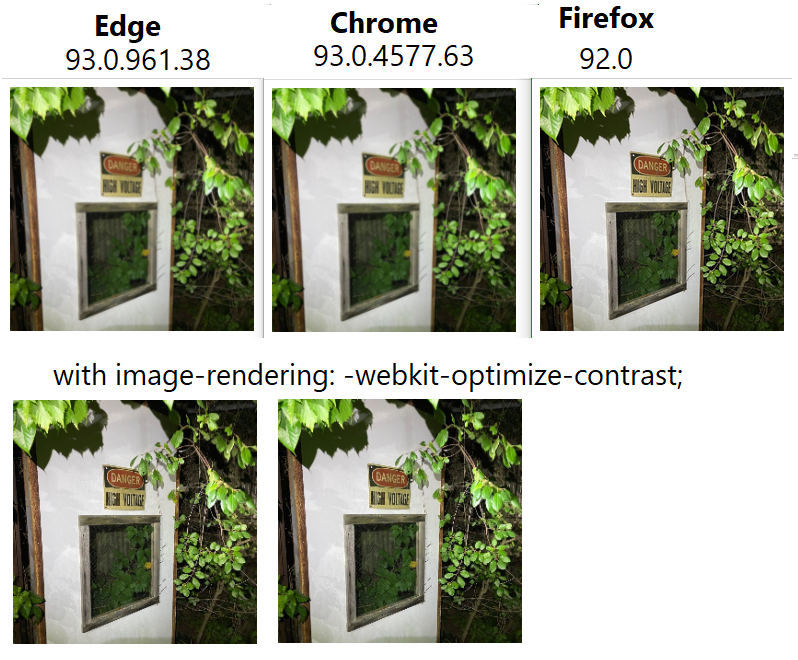 And a close-up of the text on the sign: I think firefox's rendering is significantly better, but optimize-contrast does help.

I didn't realize that the image size after using 2x matched the target size and the browser wasn't downscaling. This solution only works if you can use a fixed size container for the image.

Set the image scale and Chrome will downscale properly. Tested in Chrome 84.

The important part is using srcset with 2x at the end.

I tried image-rendering: -webkit-optimize-contrast. It improved the rendered image in Chrome but also gave me a bad looking version of the image in Safari.

At first, I needed downscaling because the 2x version of the image is still needed for Retina displays (otherwise the upscaling might look blurry). So I decided to create the two versions (1x and 2x).

After adding both, I saw that if I only used the original 2x image but with the 2x specified in srcset then the image will not render blurry anymore.

I propose another track because I was in the same situation: images slightly blurred under chrome but impeccable under firefox. Ctrl + "0" solved the problem. I had to one day use the zoom (Ctrl + "+" or "-") and did not reset it completely ...

Pastullo's answer using image-rendering totally fixes the blurry image problem on Chrome, but the image is then pixelated on Safari. This combination of media queries worked for me to set the property on Chrome 29+ and unset it on Safari 11+:

I've found that the best way to resolve this issue is to just use an svg. Another option is to use css media queries to load adaptive images sizes.

Not the answer you're looking for? Browse other questions tagged html css google-chrome firefox gravatar or ask your own question.

9
How to prevent blur on image resize in Chrome?