Apache Camel and other ESB products

It is now 2016 and a lot has changed since the question was initially asked, so I'd like to revisit it for new viewers.

Ideal for evaluation or pre-production use.

=> Meaning that you should acquire a paid Enterprise subscription for production usage. 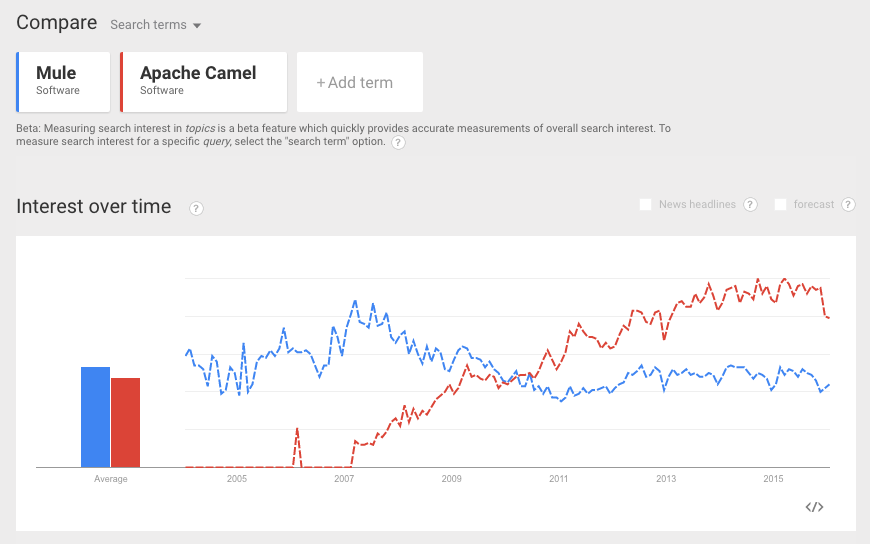 Just wanted to give you some functional metrics on the evolution of Apache Camel since 25th September 2010, when you originally asked the question. This was the source tree at that point in time.

Both products have evolved a lot over the last 5,25 years! However, due to the difference in licenses and the community nature of Mule ESB and Apache Camel, I don't think they are comparable any longer to one another.

Apache Camel is fully Open Source ❤️, while Mule ESB Community requires users to attribute Mulesoft and to publish the source code of the software that uses Mule. The Apache Software License is a business-friendly license: you are free to use Camel without attributions nor any other requirements. Truly free as in beer!

Hope this reflection upon the last years helps new viewers! :)

Disclaimer: I am a committer and PMC member at the Apache Camel project.

Apache Camel is a library that implements enterprise integration patterns (EIP). While it can use Spring as its IOC framework, it is not even dependent upon Spring, so it is completely platform independent. It is "just" a library. So you can run it any JVM environment, e.g. simple jvm, servlet, ejb, osgi. It does not bring with any of the benefits (or the overhead) of a container such Mule. It has, in my opinion, cleaner separation of concerns in this area.

Mule can also be embedded in different environments, but I think Mule has both the advantages and disadvantages of coupling their EIP library to their container. When you deploy Mule inside a servlet or ejb environment, do you really want to carry all of that baggage of the Mule container? I am not a Mule expert, and I think you can probably spend a relatively modest amount of effort and clean out some of the redundant capability. (Note this is not bad capability in all cases, it is just redundant if you are running embedded inside another container.)

Apache ServiceMix is an OSGI container that uses Camel to implement EIP as the basis of an ESB. Although ServiceMix historically started with its roots in JBI, it has moved away from JBI and has evolved into (IMO) a nice layered architecture combining best of breed Apache CXF, Camel, and ActiveMQ in an OSGI container. The main value here is not really ServiceMix and its JBI support, but the underlying OSGI container standard coupled to proven Apache transports like CXF for web services and ActiveMQ for JMS. OSGI is a mature standard that offers a container that addresses the same types of "DLL" hell that plagued Microsoft before the advent of .NET. While neither .NET nor OSGI solves the essential complexity of the underlying problem, they at least provide a means for addressing it. OSGI has other benefits as well, but from a product selection perspective the standards based container is primary, and its essential feature that Mule (and Java in general) does not address is dependency management.

Some important things to note in comparing Mule with Apache communities. Mule is like Redhat in the sense that although it is an open source license it is not really in my opinion an open community. Anyone can participate in Apache whereas MuleSoft owns the Mule community and the final roadmap. Second, although the Mule community is arguably pretty active, I think the Apache community is much larger (and naturally so since it is not a gated community). Both approaches have both plusses and minuses. One positive to the Apache approach is that there are multiple vendors for ESB's based on Camel, CXF, ActiveMQ, and OSGI. For example, Talend offers an ESB on the same core technologies without the ServiceMix JBI history. This has both plusses and minuses within the Apache community, but the real point is to highlight the difference between Apache and Mule. You won't find multilple vendors in the Mule community. So IMO an Apache ESB like Talend or ServiceMix is a broader and more inclusive, and ultimately competitive community than a closed community like Mule.

My blog post answers exactly this question: http://www.kai-waehner.de/blog/2011/06/02/when-to-use-apache-camel/ => Apache Camel is a lightweight integration framework, ServiceMix and so on are full ESBs.

Camel is a mediation engine while Mule is a light-weight integration platform. The difference is that that Mule offers all the capabilities of an ESB including a container for deploying applications, REST and Web Services. Mule can be embedded in the same way Camel to allow application developers to embed there application code with their integration code. Both integrate tightly with Spring.

Mule does not use JBI for good reasons and now that the JBI spec has been disbanded (no working group, owned by Oracle who passed on the JBI spec originally) there is no good professional or technical reason to use JBI.

There are some FAQ entries at Apache Camel which shed some light on this http://camel.apache.org/faq

And the link collection at Apache Camel http://camel.apache.org/articles.html

Have some links where people in the community talks and compare Camel to other projects.

Claus, there are a number of mistakes in the Camel FAQ, unsurprisingly, none of them in our favour :)

There could be a lot of differentiations that you can provide between ESB products.

You should know a few things before looking in the differentiation. They are

The above will be a best factors that you need to look into before you make a selection. The above is generic to most of the product selection and it needs special attention here as well.

The Secondary product difference will be specific to the tools and its domain.This is probable the answer you are looking for. Find the list that you need to introspect before making a selection.

This is probably a research that you need to do on your own to select the difference. Any ways there are many value adds that make the product suitable to your organizational rather than to say best in the market.

When it comes to Apache camel or Other ESB. The difference that will make are

0
Apache Camel 2.x and Servicemix 3.x/4
163
When to use Spring Integration vs. Camel?
0
Apache SOA vs. Mule
1557
What exactly is Apache Camel?
6
Administration and Monitoring of Apache-Camel routes in ServiceMix
0
ServiceMix and Camel OSGi Properties Component
1
Upgrade ServiceMix 3.0 to ServiceMix 6.0 with Camel
1
Duplicate ServletName detected in Apache Camel blueprint based OSGi bundles
2
Can I use Apache Camel as ESB?