During git rebase origin/development the following error message is shown from Git:

My Git version is 2.9.0. It used to work fine in the previous version.

How can I continue this rebase allowing unrelated histories with the forced flag introduced in the new release?

You can use --allow-unrelated-histories to force the merge to happen.

The reason behind this is that default behavior has changed since Git 2.9:

"git merge" used to allow merging two branches that have no common base by default, which led to a brand new history of an existing project created and then get pulled by an unsuspecting maintainer, which allowed an unnecessary parallel history merged into the existing project. The command has been taught not to allow this by default, with an escape hatch --allow-unrelated-histories option to be used in a rare event that merges histories of two projects that started their lives independently.

More information can be found in this answer.

In my case, the error was just fatal: refusing to merge unrelated histories on every try, especially the first pull request after remotely adding a Git repository.

Using the --allow-unrelated-histories flag worked with a pull request in this way:

As per 2.9.0 release notes - git pull has been taught to pass the --allow-unrelated-histories option to underlying git merge

I got this error when I set up a local repository first. Then I went to GitHub and created a new repository. Then I ran

When I tried to push or pull, I got the same fatal: unrelated_histories error every time.

Here is how I fixed it:

For this, enter the command:

You will be routed to a Vim edit window:

I ran this command and issue got resolved.

Check out this page for more info.

Following Error when do a git pull origin master:

Run one of the below Commands

Now push the changes on local

The “fatal: refusing to merge unrelated histories” Git error occurs when two unrelated projects are merged (i.e., projects that are not aware of each other’s existence and have mismatching commit histories).

By default, git merge command refuses to merge histories that do not share a common ancestor. This option can be used to override this safety when merging histories of two projects that started their lives independently. As that is a very rare occasion, no configuration variable to enable this by default exists and will not be added. 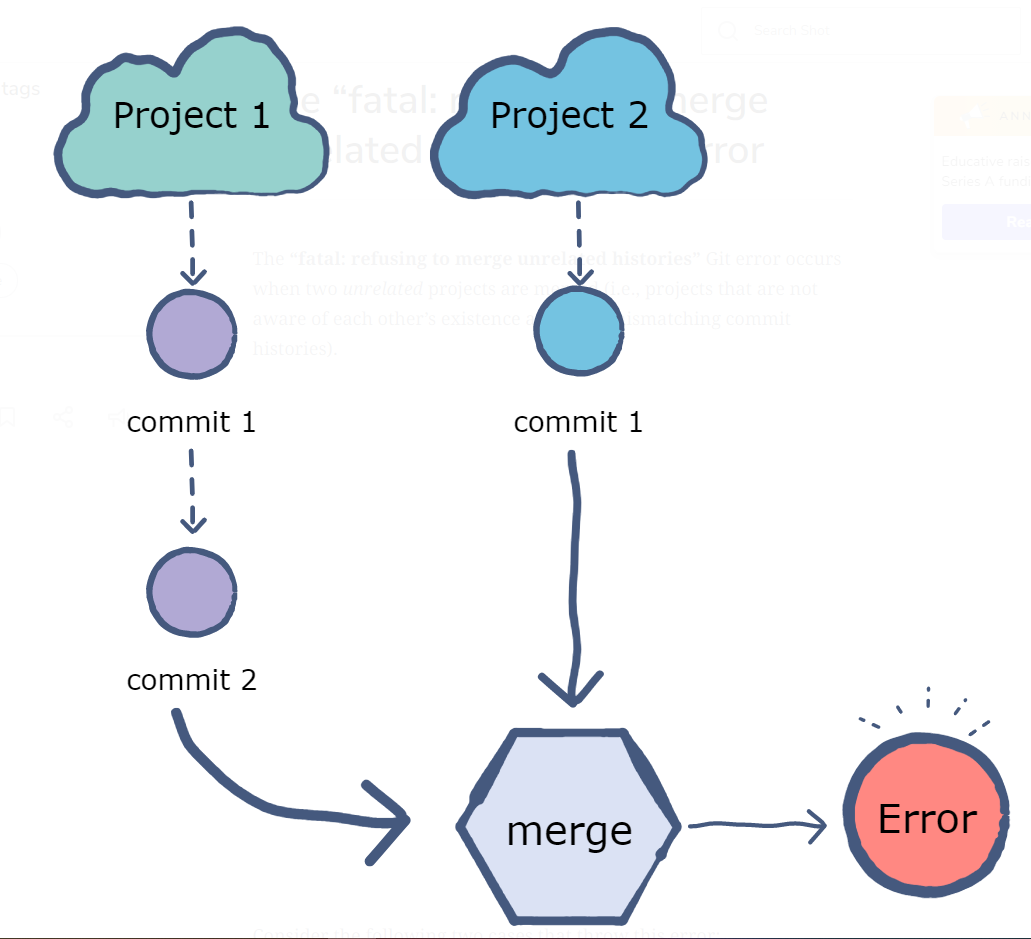 I had the same problem. Try this:

For Android Studio and IntelliJ:

First, commit everything and resolve any conflicts.

Then open the terminal from below of IDE and enter:

Now you can push.

Since all the other answers are not actually answering the question, here is a solution inspired by this answer on a related question.

So you get your error doing git rebase:

This error doesn't actually cancel the rebase, but you are now in the middle of it:

So you can now do the merge by hand. Find out the parent commits of the original merge commit:

Find out which of the two merge parents is the one that was merged into the current one (probably the second one, verify with git log 222222222), and then do the merge by hand, copying the commit message of the original merge commit:

WARNING THIS WILL POTENTIALLY OVERWRITE THE REMOTE REPOSITORY

Firstly pull the remote changes to your local using the following command:

** branchname is master in my case.

When the pull command done, conflict occurs. You should solve the conflicts. I use Android Studio to solve conflicts. 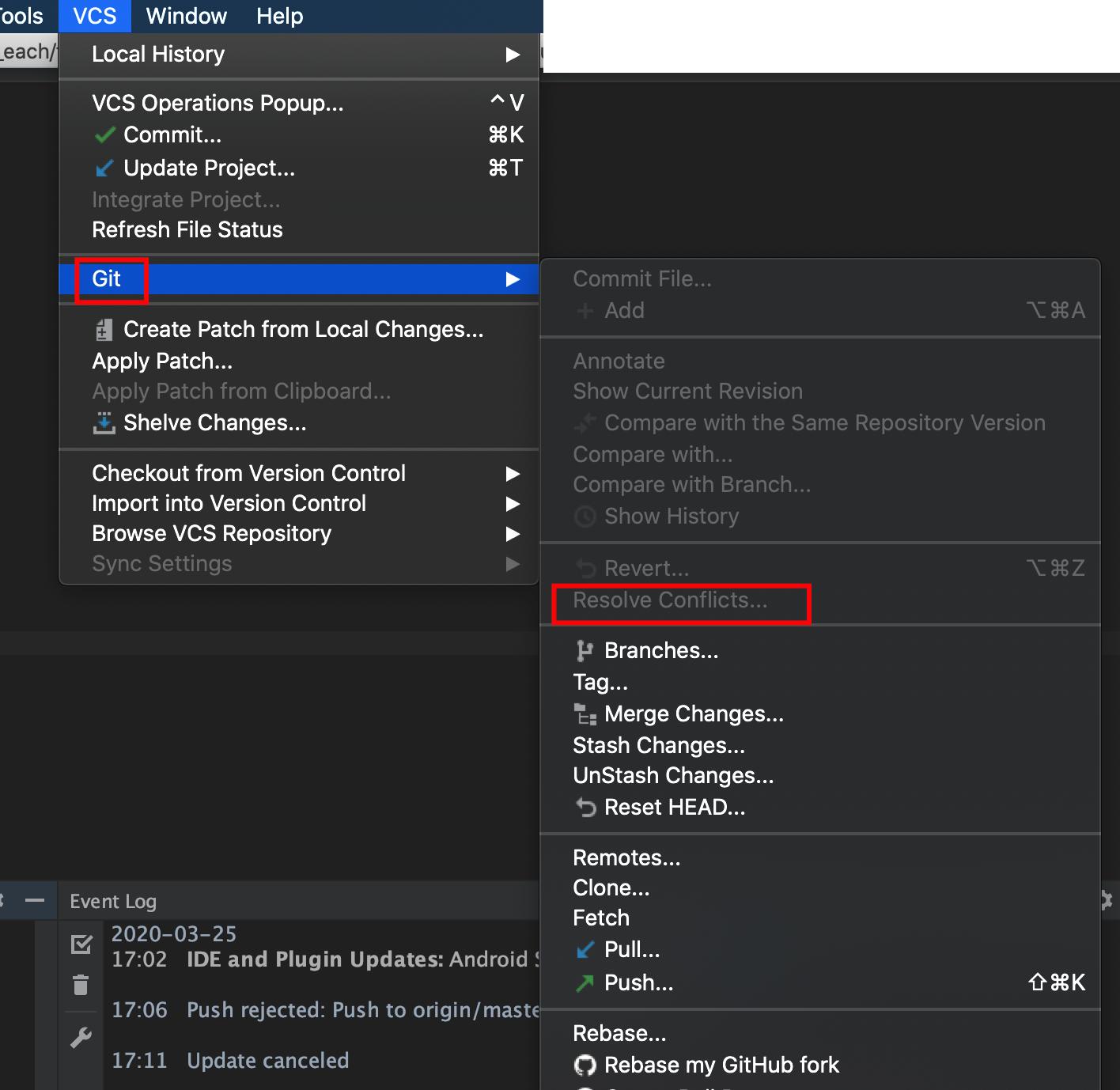 When conflicts solved, merge is done!

Now you can safely push.

I had the same problem. The problem is remote had something preventing this.

I first created a local repository. I added a LICENSE and README.md file to my local and committed.

Then I wanted a remote repository so I created one on GitHub. Here I made a mistake of checking "Initialize this repository with a README", which created a README.md in remote too.

So now when I ran

Now to overcome this I did

Which resulted in the below error:

I removed the remote repository and created a new (I think only removing file README could have worked) and after that the below worked:

This usually happens when you commit first time to remote repository. As error clearly says "refusing to merge unrelated histories", we need to use --allow-unrelated-histories flag.

Now there would be some conflicts which we have to solve manually. After that just commit the code and push it.

When doing a git pull, I got this message fatal: refusing to merge unrelated histories for a repo module where I hadn't updated the local copy for a while.

I ran this command just to refresh local from origin. I just wanted latest from remote and didn't need any local changes.

This fixed it in my case.

I tried git pull --allow-unrelated-histories didn't work, but what solves this issue for me was:

I struggled with this as well, but I managed to find a workaround.

When you run into the error above, just cherry-pick the merge commit and then continue the rebase:

If you created a new repo on GitHub and accidentally initialized it with README or .gitignore files.

If you found yourself unable to merge or rebase because .git folder got corrupted.

Now the local and remote will have "related histories" and will merge or rebase happily.

I run into the same issue: This is what I've done:

I used VsCode to resolve merge conflicts then I did:

For my case I wanted to merge unrelated history branch to my current:

The error is resolved by toggling the allow-unrelated-histories switch. After a git pull or git merge command, add the following tag:

After then may be you will get conflict. So resolved the conflict and commit it. It's work for me.

The most voted answer doesn't solve this question, which is in the context of rebasing.

The only way to synchronize the two diverged branches is to merge them back together, resulting in an extra merge commit and two sets of commits that contain the same changes (the original ones, and the ones from your rebased branch). Needless to say, this is a very confusing situation.

So, before you run git rebase, always ask yourself, “Is anyone else looking at this branch?” If the answer is yes, take your hands off the keyboard and start thinking about a non-destructive way to make your changes (e.g., the git revert command). Otherwise, you’re safe to re-write history as much as you like.

I faced this error after force-pushing to origin/master a dev branch with a few hundreds of commits, by the Administrator, on the server side.

Well, what I just wanted is not to pull (fetch+merge) but just to align my local master to the remote origin master. Moving to a separate folder and doing a git clone is one approach, but I believe it is more elegant solution just to do a hard reset.

So my answer to this error, in this particular case, is none of the above. I just wanted this:

I am using the rebase for years and I had never encountered such a problem. However, your first problem is, that you try to do it directly on the remote branch development from the remote repository, called origin. That is literally wrong because rebase is a dangerous command, that restructures the git history. Having said that, you should first try on your local repository and pushing it only, if it works for you as expected.

So, my usual rebase workflow looks like following (but please keep in mind, that you should not use rebase on branches, which you are not the only one committee. For such branches, use simply merge and resolve conflicts, if applicable):

As I already mentioned, keep in mind, that rebase manipulates the git history, that is usually a bad thing. However, it's possible to do that on branches, where no one else commits to. In order to keep the branch pull-able for the other developers, use another merge strategy like merge itself, squash or cherrypick. So, in other words: Rebase shouldn't be your tool on distributed development. It works fine for you if you are the only one who works on this repository.

We use the feature branch strategy. In this, I usually use rebase in order to get the "updates" from the other developers, that happened in the meantime on the master branch. Doing so, it reduces the size of commits that are visible in a pull request. Therefore, it makes it easier for the code reviewer to see my changes made in this feature branch.

This also happens if you have a shallow git clone of the repository.

I recently encountered this problem in my CI/CD setup, none of the above solutions worked for me. I was building CI/CD pipeline to analyze code on MR creation against MR source branch, for that, I need to run analysis on the main branch once and then on the MR source branch merged with main, I got this error while trying to merge branches via git merge command.

Reason for this happening in CI/CD setup: Usually in CI/CD environment, git repositories are a shallow clone to speed up things, which doesn't include a full history of commits due to which when merging git may think that we are trying to merge unrelated branches which is in fact not true.

fatal: refusing to merge unrelated histories may also be caused by a shallow clone b.c. the graft commit doesn't go far enough down to see the common base

I had same error, this command worked me

Note that gitlab might be origin or heroku in your case.