Why do we need stack allocation when we have a red zone?

I have the following doubts:

But I cannot grasp idea of that. Why does it matter? Is it necessary to sub rsp, 12 without redzone? After all, stack size is limited at the beginning so why sub rsp, 12 is important? I know that it makes possible us to follow the top of the stack but let's ignore it at that moment.

I know what some instructions use rsp value ( like ret) but don't care about it in that moment.

The crux of the problem is: We have no redzone and we've done:

Is it difference with?

The "red zone" is not strictly necessary. In your terms, it could be considered "pointless." Everything that you could do using the red zone, you could also do the traditional way that you did it targeting the IA-32 ABI.

Here's what the AMD64 ABI says about the "red zone":

The 128-byte area beyond the location pointed to by %rsp is considered to be reserved and shall not be modified by signal or interrupt handlers. Therefore, functions may use this area for temporary data that is not needed across function calls. In particular, leaf functions may use this area for their entire stack frame, rather than adjusting the stack pointer in the prologue and epilogue. This area is known as the red zone. 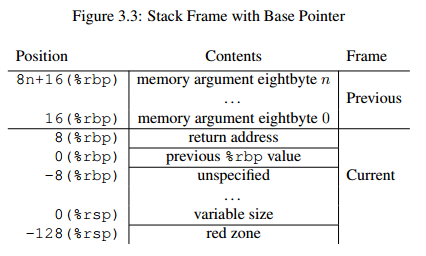 The real purpose of the red zone is as an optimization. Its existence allows code to assume that the 128 bytes below rsp will not be asynchronously clobbered by signals or interrupt handlers, which makes it possible to use it as scratch space. This makes it unnecessary to explicitly create scratch space on the stack by moving the stack pointer in rsp. This is an optimization because the instructions to decrement and restore rsp can now be elided, saving time and space.

we don't need to do it in cases where we only need a 128-byte scratch area (or smaller), because then we can use the red zone as our scratch area.

Plus, since we no longer have to decrement the stack pointer, we can use rsp as the base pointer (instead of rbp), making it unnecessary to save and restore rbp (in the prologue and epilogue), and also freeing up rbp for use as another general-purpose register!

(Technically, turning on frame-pointer omission (-fomit-frame-pointer, enabled by default with -O1 since the ABI allows it) would also make it possible for the compiler to elide the prologue and epilogue sections, with the same benefits. However, absent a red zone, the need to adjust the stack pointer to reserve space would not change.)

Note, however, that the ABI only guarantees that asynchronous things like signals and interrupt handlers not modify the red zone. Calls to other functions may clobber values in the red zone, so it is not particularly useful except in leaf functions (which those functions that do not call any other functions, as if they were at the "leaf" of a function-call tree).

A final point: the Windows x64 ABI deviates slightly from the AMD64 ABI used on other operating systems. In particular, it has no concept of a "red zone". The area beyond rsp is considered volatile and subject to be overwritten at any time. Instead, it requires that the caller allocate a home address space on the stack, which is then available for the callee's use in the event that it needs to spill any of the register-passed parameters.

If the amount of scratch space that a function needs is up to 128 bytes then it can use addresses below the stack pointer without needing to adjust the stack: this is the optimisation. Compare:

With the same code using the red-zone:

Not the answer you're looking for? Browse other questions tagged assembly x86 x86-64 abi red-zone or ask your own question.

117
Why does Windows64 use a different calling convention from all other OSes on x86-64?
25
Why can't kernel code use a Red Zone
31
Where exactly is the red zone on x86-64?
1
Suspicious usage of below-stack-pointer memory area for local variables

612
What is an application binary interface (ABI)?
5
Why do we use sub $0x18, %rsp?
16
Why does the x86-64 GCC function prologue allocate less stack than the local variables?
47
What registers are preserved through a linux x86-64 function call
2
Incorrect stack red-zoning on x86-64 code generation
1514
Replacing a 32-bit loop counter with 64-bit introduces crazy performance deviations with _mm_popcnt_u64 on Intel CPUs
31
Where exactly is the red zone on x86-64?
3
Why do I have to play with “rsp” to call a c++ function?
2
x86 explanation, number of function arguments and local variables