What is the effect of setting a linux socket - high priority?

From the linux socket manpage:

SO_PRIORITY
Set the protocol-defined priority for all packets to be sent on this socket. Linux uses this value to order the networking queues: packets with a higher priority may be processed first depending on the selected device queueing discipline.

And this is set using:

What will happen in the following scenarios:

Every Linux network interface has a so called qdisc (queuing discipline) attached to it. And the answer to your questions depends on the qdisc in use. Some queuing disciplines like pfifo and bfifo, have no concept of priority. So if they're used, the answer is simple - there will be no prioritization

However, with a prioritizing qdisc such as pfifo_fast (which typically the default qdisc on Linux), the socket priority can have an effect.

This image describes what's going on in a pfifo_fast qdisc: 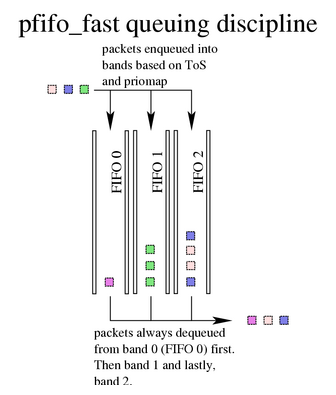 We see that packets are placed in queues depending on their priority. When the time comes for the interface to send the next packet (frame actually, but let's not get into that), it will always choose to send the packet with the highest priority. That means that if multiple packets are waiting, those with the highest priority will be sent first. Note that this requires the interface to be congested - if the interface isn't congested and packets are sent as soon as they arrive from the OS, then there is no queuing and therefore no prioritization.

Other qdiscs have different structures and policies. For example an SFQ qdisc: 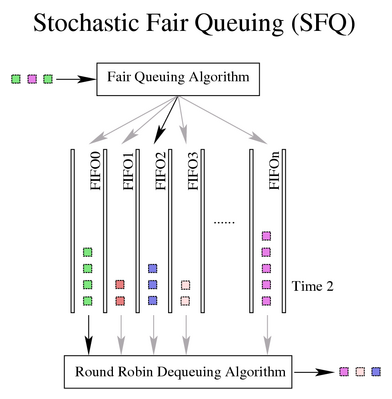 With that in mind, let's get back to your questions:

Answers on your questions:

Some words about priorities, network queues and device disciplines. All this stuff is related to quality of service and particularly to Differentiated Services (DiffServ).

When packet is sent then it put to interface "queue" that processed by network device. By default queue is not real queue but three real fifos that are strongly prioritised. If there is packet in fifo0 than packets in fifo1 waiting. Socket priority is mapped to this fifo by following mapping:

So priority 1 will be dispatched after priority 0.

For changing default behaviour "traffic control" (tc) utility is used. With it you can configure priority queues on the network interface. This is so called "device queueing discipline". You can define how priorities are served by the particular network device (answer of Malt has good explanation of this).

Socket has states "ready for read"/"not ready for read" and this is bool. If any data is arrived to not ready socket it changes state from "not ready" to "ready" and this is seen by functions like select/poll or by returning from blocked recv call. What thread will be woken depends not by socket priority but by thread priority.

So if you want to prioritise sockets you need

Not the answer you're looking for? Browse other questions tagged linux sockets tcp network-programming or ask your own question.

1036
What is the difference between a port and a socket?
745
Get current time in seconds since the Epoch on Linux, Bash
983
What is the meaning of "POSIX"?
2220
How to change the output color of echo in Linux
3
How to programmatically increase the per-socket buffer for UDP sockets on LInux?
1075
Why does the C preprocessor interpret the word "linux" as the constant "1"?
3
Determine the state of a TCP socket