is optionality (mandatory, optional) and participation (total, partial) are same?

And Participation denoted as bold line and a normal line.

and some refer it as the minimum cardinality

What is the correct definitions of those relationships and what is the difference..

Let's start with definitions and examples of each of the concepts:

Roles aren't often talked about in database tutorials, but they're an important concept. Consider a marriage - a relationship with two mandatory roles filled by the same entity set. In most relationships, the entity sets also define the roles, but when an entity set appears multiple times in a single relationship, we distinguish them in different roles.

In this example, a Prescription contains LineItems which are identified by the Prescription's key and a line number. In other words, the LineItems table will have a composite key (Prescription_ID, Line_Number).

For examples of non-identifying relationships, see the previous examples. While Medicine participates totally in the Produce relationship, it has its own identity (e.g. a surrogate key, though I didn't indicate it). Note that surrogate keys always imply regular entities.

Mandatory partial participation: See above: A Laboratory can exist without producing any medicine, but Medicine can't be Produced without a Laboratory.

Mandatory total participation: See above: Medicine can't exist without being Produced, and a Laboratory can't Produce something unspecified.

That leaves optional total participation, which I had to think about a bit to find an example:

Some Patients Die of an unknown Cause, but a Cause of death can't exist without a Patient Dying of it.

Total participation doesn't imply an identifying relationship - Medicine can't exist without being Produced by a Laboratory but Medicine is identified by its own attributes.

Partial participation in a non-identifying relationship is very common. For example, Medicine can exist without being Purchased, and Medicine is identified by its own attributes.

It's unusual for a relationship to have less than two mandatory roles. Identifying relationships are binary relationships, so the parent and child roles will be mandatory - the Contain relationship between Prescription and LineItem can't exist without both entities.

Optional roles are usually only found on ternary and higher relationships (though see the example of patients dying of causes), and aren't involved in identification. An alternative to an optional role is a relationship on a relationship: 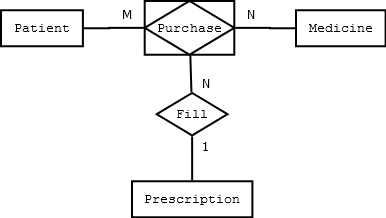 By turning Purchase into an associative entity, we can have it participate in a Fill relationship with Prescription. To maintain the same semantics as above I specified that a Purchase can only Fill one Prescription.

If we translate from conceptual to physical model (skipping logical modeling / further normalization), making separate tables for each entity and relationship, things look pretty similar, though you have to know how to read the cardinality indicators on the foreign key lines to recover the ER semantics. 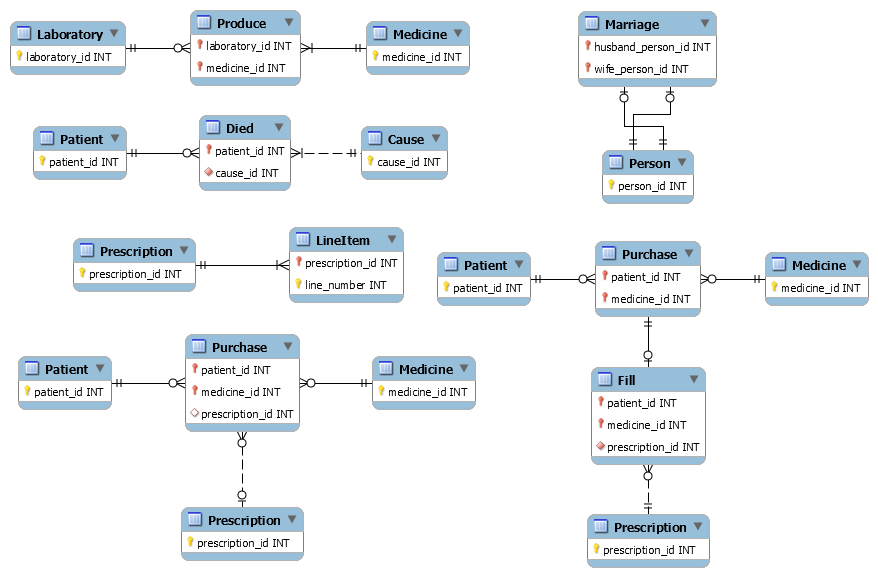 However, it's common to denormalize tables with the same primary keys, meaning one-to-many relationships are combined with the entity table on the many side:

A relationship is physically represented as two or more entity keys in a table. In this case, the entity keys - patient_id and cause_of_death_id are both found in the Patient table. Many people think the foreign key line represents the relationship, but this comes from confusing the entity-relationship model with the old network data model.

I hope this helps. Feel free to ask questions.

Not the answer you're looking for? Browse other questions tagged entity-relationship or ask your own question.

4
Weak entities and foreign keys
3
ER diagram: Total participation and weak entities
2
Can or Should an ERD Action involve more than 2 Entities?
1
What is the difference of partiality and optionality when drawing ER diagrams
0
What's the difference between having a required foreign key to a primary key?
1
Differences between has and contains relationship in ERD?
1
Relationships in Data modeling
0
When does one use ternary relationships instead of binary ones in a database?
1
Weak Entity in ERD
1
Modeling optional but mandatory relationships in ER diagrams
See more linked questions