How to flip only one axis of transformation matrix?

I have a 4x4 transformation matrix. However, after trying out the transformation I noticed that movement and rotation of the Y axis is going the opposite way. The rest is correct.

I got this matrix from some other API so probably it is the difference of coordinate system. So, how can I flip an axis of transformation matrix?

If only translation I can add minus sign on the Y translation, but I have no idea about opposite rotation of only one axis since all the rotation is being represented in the same 3x3 area. I thought there might be some way that even affect both translation and rotation at the same time. (truly flipping the axis)

Edit: I'm pretty sure the operation you're looking for is changing coordinate systems while maintaining Z-up or Y-up. In this case, try setting all the elements of the second column (or row) of your matrix to their inverse.

This question would be better for the Math StackExchange. First, a really helpful read on rotation matrices. 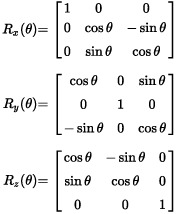 Given a matrix derived from the same rotation order, the resulting matrix would be as follows, where alpha is the X angle, beta is the Y angle, and gamma is the Z angle:

Now that you know alpha, beta, and gamma, you can reverse beta and remake the rotation matrix.

There's a good chance that there's a better way to do this using quaternions, but you should ask the Math StackExchange these kinds of language-agnostic questions.

Much shorter answer: if you are not careful with your frame orientation many things down your pipeline are likely to have a bad hair day. The reason is "parity", a.k.a. "frame orientation", a.k.a. "right-handedness" (or rarely left-handedness). Most 3D geometry tools and libraries that work together normally assume implicitly that all coordinate systems in play are right-handed (or at least consistently-handed). Inverting the orientation of just one axis in a coordinate system changes its orientation from right to left handed or viceversa.

So, suggestion for things to check & try in your problem:

8
Obtain Rotation Axis from Rotation Matrix and translation vector in OpenCV
2
How to calculate transformation matrix
64
Camera position in world coordinate from cv::solvePnP
1
What are the maths behind 3D billboard sprites? (was: 3D transformation matrix to 2D matrix)
1
Matrix multiplication to mirror translation and rotation of only 1 axis?
2
Fundamental matrix from transformation
2
Apply matrix transformation to a sphere
1
Matrices for Computer Graphics operations
0
Convert pitch rotation to roll rotation in OpenGL matrix