How to obtain access to children nodes in javafx? 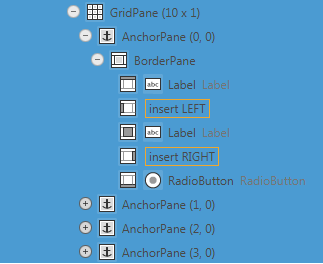 As you can see there is GridPane with 10 columns. Each of them include BorderPane wrapped into AnchorPane. Each BorderPane is composed of 2 labels and 1 radioButton. Below you can see how it look like: 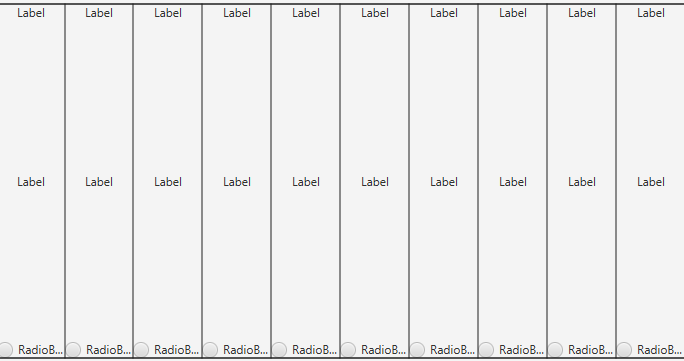 I want to ask you how to get acces from code side to these elements. I know that I can use getChildren() method on GridPane but then I get only AnchorPanes from GridPane columns. I want to go deeply, and for example set text into one of the labels.

I want to add that set id in Scene Builder is not what I want cause there will be many columns and I'm going to fill it in some loop.

Could you help me with this ?

One more thing: I build the view in Scene Builder.

You you can set a css id for the nodes within your loop at creation time. You can later lookup the nodes by the id you set. A lookup will also work on a scene to find any node or matching set of nodes within the scene.

Of course, you can always access the child the standard object accessor way too:

If the structure is nested as you have in your question, then you can do things such as:

Such searches get convoluted over large structures and probably are best avoided as your code would get more brittle. So a css based lookup or tree traversal would probably be preferred, or a direct injection of a reference via an fx:id and @FXML, which wouldn't work well in your case because you create the items in code in a loop, hence the lookup method is probably best for you.

Not the answer you're looking for? Browse other questions tagged javafx scenebuilder or ask your own question.

32
How to set padding between columns of a JavaFX GridPane?
2
JavaFX: ScrollPane method getChildren() is not visible
12
FXMLLoader how to access the components by FXID?
95
Where has the JavaFX scene builder gone?
2
How to inherit properties in custom JavaFX panes
0
javafx rectangle onmouseclick event (fxml)