Admittedly I don't get it. Say you have a memory with a memory word of length of 1 byte. Why can't you access a 4 byte long variable in a single memory access on an unaligned address(i.e. not divisible by 4), as it's the case with aligned addresses?

The memory subsystem on a modern processor is restricted to accessing memory at the granularity and alignment of its word size; this is the case for a number of reasons.

Modern processors have multiple levels of cache memory that data must be pulled through; supporting single-byte reads would make the memory subsystem throughput tightly bound to the execution unit throughput (aka cpu-bound); this is all reminiscent of how PIO mode was surpassed by DMA for many of the same reasons in hard drives.

The CPU always reads at its word size (4 bytes on a 32-bit processor), so when you do an unaligned address access — on a processor that supports it — the processor is going to read multiple words. The CPU will read each word of memory that your requested address straddles. This causes an amplification of up to 2X the number of memory transactions required to access the requested data.

Because of this, it can very easily be slower to read two bytes than four. For example, say you have a struct in memory that looks like this:

On a 32-bit processor it would most likely be aligned like shown here:

The processor can read each of these members in one transaction.

Say you had a packed version of the struct, maybe from the network where it was packed for transmission efficiency; it might look something like this:

Reading the first byte is going to be the same.

When you ask the processor to give you 16 bits from 0x0005 it will have to read a word from 0x0004 and shift left 1 byte to place it in a 16-bit register; some extra work, but most can handle that in one cycle.

For any given address space, if the architecture can assume that the 2 LSBs are always 0 (e.g., 32-bit machines) then it can access 4 times more memory (the 2 saved bits can represent 4 distinct states), or the same amount of memory with 2 bits for something like flags. Taking the 2 LSBs off of an address would give you a 4-byte alignment; also referred to as a stride of 4 bytes. Each time an address is incremented it is effectively incrementing bit 2, not bit 0, i.e., the last 2 bits will always continue to be 00.

This can even affect the physical design of the system. If the address bus needs 2 fewer bits, there can be 2 fewer pins on the CPU, and 2 fewer traces on the circuit board.

The CPU can operate on an aligned word of memory atomically, meaning that no other instruction can interrupt that operation. This is critical to the correct operation of many lock-free data structures and other concurrency paradigms.

The memory system of a processor is quite a bit more complex and involved than described here; a discussion on how an x86 processor actually addresses memory can help (many processors work similarly).

There are many more benefits to adhering to memory alignment that you can read at this IBM article.

A computer's primary use is to transform data. Modern memory architectures and technologies have been optimized over decades to facilitate getting more data, in, out, and between more and faster execution units–in a highly reliable way.

Another alignment-for-performance that I alluded to previously is alignment on cache lines which are (for example, on some CPUs) 64B.

For more info on how much performance can be gained by leveraging caches, take a look at Gallery of Processor Cache Effects; from this question on cache-line sizes

Understanding of cache lines can be important for certain types of program optimizations. For example, the alignment of data may determine whether an operation touches one or two cache lines. As we saw in the example above, this can easily mean that in the misaligned case, the operation will be twice slower.

It's a limitation of many underlying processors. It can usually be worked around by doing 4 inefficient single byte fetches rather than one efficient word fetch, but many language specifiers decided it would be easier just to outlaw them and force everything to be aligned.

There is much more information in this link that the OP discovered.

you can with some processors (the nehalem can do this), but previously all memory access was aligned on a 64-bit (or 32-bit) line, because the bus is 64 bits wide, you had to fetch 64 bit at a time, and it was significantly easier to fetch these in aligned 'chunks' of 64 bits.

So, if you wanted to get a single byte, you fetched the 64-bit chunk and then masked off the bits you didn't want. Easy and fast if your byte was at the right end, but if it was in the middle of that 64-bit chunk, you'd have to mask off the unwanted bits and then shift the data over to the right place. Worse, if you wanted a 2 byte variable, but that was split across 2 chunks, then that required double the required memory accesses.

So, as everyone thinks memory is cheap, they just made the compiler align the data on the processor's chunk sizes so your code runs faster and more efficiently at the cost of wasted memory.

Fundamentally, the reason is because the memory bus has some specific length that is much, much smaller than the memory size.

So, the CPU reads out of the on-chip L1 cache, which is often 32KB these days. But the memory bus that connects the L1 cache to the CPU will have the vastly smaller width of the cache line size. This will be on the order of 128 bits.

Misaligned accesses will occasionally overlap two cache lines, and this will require an entirely new cache read in order to obtain the data. It might even miss all the way out to the DRAM.

Furthermore, some part of the CPU will have to stand on its head to put together a single object out of these two different cache lines which each have a piece of the data. On one line, it will be in the very high order bits, in the other, the very low order bits.

There will be dedicated hardware fully integrated into the pipeline that handles moving aligned objects onto the necessary bits of the CPU data bus, but such hardware may be lacking for misaligned objects, because it probably makes more sense to use those transistors for speeding up correctly optimized programs.

In any case, the second memory read that is sometimes necessary would slow down the pipeline no matter how much special-purpose hardware was (hypothetically and foolishly) dedicated to patching up misaligned memory operations.

@joshperry has given an excellent answer to this question. In addition to his answer, I have some numbers that show graphically the effects which were described, especially the 2X amplification. Here's a link to a Google spreadsheet showing what the effect of different word alignments look like. In addition here's a link to a Github gist with the code for the test. The test code is adapted from the article written by Jonathan Rentzsch which @joshperry referenced. The tests were run on a Macbook Pro with a quad-core 2.8 GHz Intel Core i7 64-bit processor and 16GB of RAM. 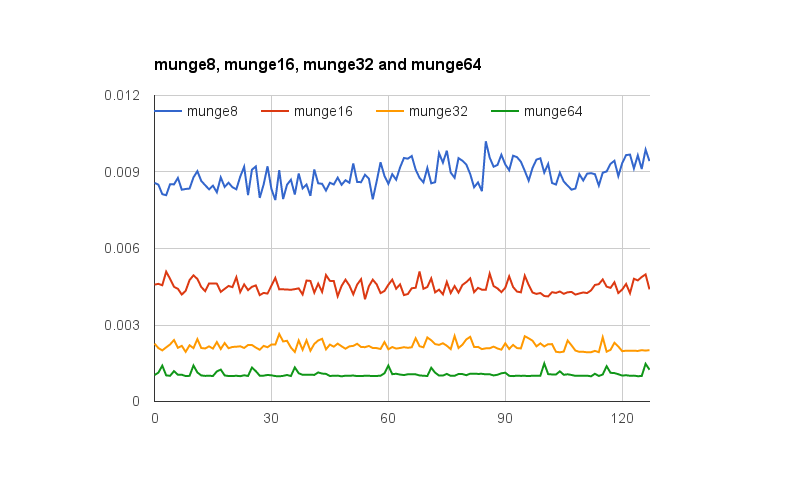 If you have a 32bit data bus, the address bus address lines connected to the memory will start from A2, so only 32bit aligned addresses can be accessed in a single bus cycle.

So if a word spans an address alignment boundary - i.e. A0 for 16/32 bit data or A1 for 32 bit data are not zero, two bus cycles are required to obtain the data.

If a system with byte-addressable memory has a 32-bit-wide memory bus, that means there are effectively four byte-wide memory systems which are all wired to read or write the same address. An aligned 32-bit read will require information stored in the same address in all four memory systems, so all systems can supply data simultaneously. An unaligned 32-bit read would require some memory systems to return data from one address, and some to return data from the next higher address. Although there are some memory systems that are optimized to be able to fulfill such requests (in addition to their address, they effectively have a "plus one" signal which causes them to use an address one higher than specified) such a feature adds considerable cost and complexity to a memory system; most commodity memory systems simply cannot return portions of different 32-bit words at the same time.

On PowerPC you can load an integer from an odd address with no problems.

Sparc and I86 and (I think) Itatnium raise hardware exceptions when you try this.

One 32 bit load vs four 8 bit loads isnt going to make a lot of difference on most modern processors. Whether the data is already in cache or not will have a far greater effect.

Not the answer you're looking for? Browse other questions tagged memory alignment memory-alignment or ask your own question.

7
Why is memory alignment required?
1
Why should structure have to be word aligned?
0
Why must an int have a memory address that is divisible by four on most current architectures?
-1
What's the purpose of memory alignment and why I do need it?
458
How to allocate aligned memory only using the standard library?
90
Line size of L1 and L2 caches
36
Can modern x86 hardware not store a single byte to memory?
14
Why strcmp returns int but not char?
16
When is it more appropriate to use valloc() as opposed to malloc()?
6
How can I accurately benchmark unaligned access speed on x86_64?
See more linked questions

27
Why does CPU access memory on a word boundary?
3597
How can I create a memory leak in Java?
115
What's the difference between a word and byte?
4
16 byte memory alignment using SSE instructions
5
Memory Address Alignment
11
How does a compiler know the alignment of a physical address?
4
Memory alignment in an array of structures
4
GCC variables alignment issues
3
Why is memory alignment needed?