I have a plain text file named index.html that contains a single word with 5 characters with no EOL character and with no HTML tags.

I want to serve it on web with PHP Development Server. So I opened a Terminal in the folder containing index.html file and ran:

It becomes accessible via http://localhost:8000/index.html and the content of the index.html file Hamid is shown in the Safari browser. 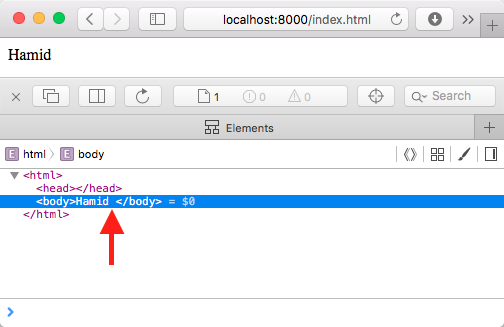 But in the Web Inspector there is an additional space after the word Hamid and before </body> tag:

I tried change the content of index.html to what I want to be represented:

But the result is the same. It will be changed to:

I tried to test the served page with this command in Terminal:

But the result shows that the output has 6 characters instead of 5 characters:

How can I prevent this additional space to be reproduced?

EDIT: I made the index.html file with this command:

In addition, I do not want to use any PHP code or modification tricks to original file served by the web server. Just to present the original file itself.

UPDTE: Thanks to @Jeff and @atul-jindal, I tested the size of index.html that is created with echo command and found extra 0A at the end of file. This is the output of xxd index.html:

But it is not solved yet. As I mentioned above, I used this command to create index.html:

After that, contents of index.html with an extra 0A is:

Now, with Safari there is extra space after Hamid exactly like the image above; with curl this extra space is after </html> closing tag like the original file. Why this is happened in the browser?

When you create file, it automatically adds extra space character at EOL. you can use trim function to remove white space. Additionally, when you output as HTTP request, in browser it will add up HTML tags to request as it is HTML document.

1252
How can I sanitize user input with PHP?
108
How to post JSON to PHP with curl
1250
How to remove the space between inline/inline-block elements?
0
How can I echo php with php?
776
How do I send a POST request with PHP?
0
Where is the right place to include a file when working with HTML & php