I don't even know how to describe the plot I am trying to generate properly, which is not a great start. I will first show you my data, and then try to explain / show images that have elements of it.

Some images that have elements that I am trying to pull together:

I've also tried to apply some of the pieces of this stackoverflow example, but I can't figure out how to make it work for my data set. I like the pos v. neg bars here; a single bar that covers both, and the colour differentiation of it. This does not have the grouping of conditions for one sample, or the colour coding extra layer that differentiates condition

I have tried a bunch of things, and I just can't get it right. I think I am really struggling because a lot of geom_bar examples use count data, that the plot calculates itself, where as I am giving it direct count data. I don't seem to be able to successful make that differentiation in my code, when I transfer to stat= "identity" then everything gets messy. Any thoughts or suggestions would be very greatly appreciated!

Using the link suggested: So I've been playing around with that as a template, but I've gotten stuck.

when I try to run the ggplot line, it returned an error: could not find function ".". I realized that I did not have dplyr installed/loaded, so I did that. Then I played around a lot and ending up coming up with:

this plots by strain, the count.up and count.down value under both conditions

The one thing I have not been able to get working (unfortunately) is how to display the number representing the 'value' inside each bar box. I've gotten the numbers to display, but I cannot get them in the right place. I'm going a little crazy!

My data is the same as above; this is where my code is at

I have looked at a ton of examples showing labels using geom_text on dodged plots. I have been unable to implement any successfully. The closest I've gotten is as follows - any suggestions would be appreciated! 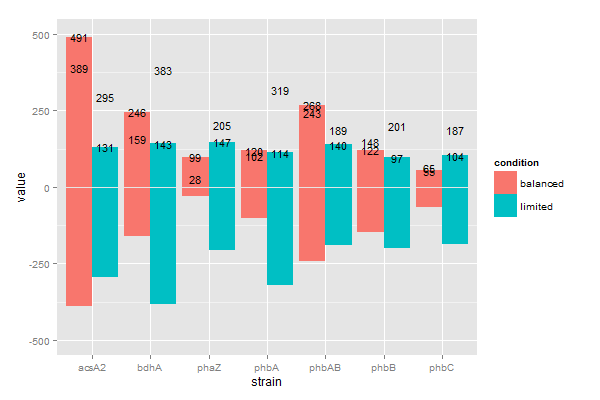 Why will you not align!

I suspect that my issue has to do with how I actually plotted, or the fact that I am not telling the geom_text command properly how to position itself. Any thoughts?

Try this. Just as you position the bars with two statements (one for positive, one for negative), position the text in the same way. Then, fine-tune their positioning (inside the bar, or outside the bar) using vjust. Also, there is no 'label' variable in the data frame; the label, I assume, is value. 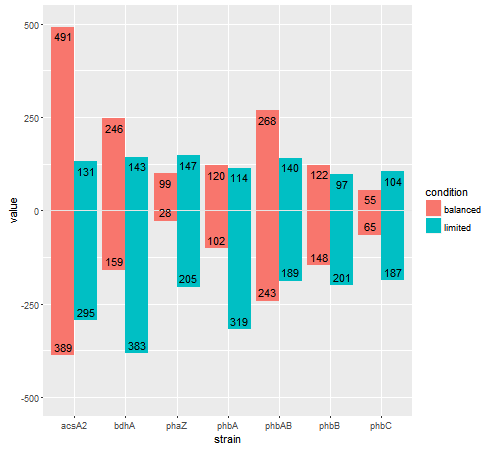 Not the answer you're looking for? Browse other questions tagged r ggplot2 geom-bar or ask your own question.

128
Showing data values on stacked bar chart in ggplot2
8
How to prevent two labels to overlap in a barchart?

1
ggplot2 stats="identity" and stacking colors in bar plot gives "striped" bar chart
1
ggplot2: Grouping bars of 3 way interaction stacked bar plot
0
Geom_bar with position dodge on one categorical variable and colour on another
7
order and fill with 2 different variables geom_bar ggplot2 R
1
ggplot2 to plot mean and sd of a variable side by side
1
Grouped Stacked Bar Charts in R?