I've cloned a repository with a solution created with the same version of Visual Studio (update 3) on another PC, always with windows 10.

When I try to build the solution on my laptop I obtain the following error:

In this page I've read that I must add $(UniversalCRT_IncludePath) to my include paths, but even in this case I obtain the same error.

I've checked and $(UniversalCRT_IncludePath) refers to this path:

This path is missing on my laptop. Instead I've this one:

So it seems that window version is different. Probably this is true, because on my laptop I didn't installed the 1511 windows updgrade, while in the other pc is all installed correctly.

My question is how can I refer to corecrt.h file in both pc without make a mess with paths. I'd like to avoid to hard-link these path because they are pc dependent. and I don't understand why in my laptop the path is wrong considering that it should be system dependent and not cabled into solution.

How can I solve this issue? I know that I can update my laptop to the same windows version but I'd like to avoid it for many reasons.

I've noticed that that I have this path:

Maybe in Visual Studio 2015 folder I can set explicitly the $(UniversalCRT_IncludePath) in some .bat file (vcvarsall.bat or similiar) but I don't know which file and in which position.

you probably fixed this already, but if someone else comes along, i solved this by following the tip here.

There is probably a much better best-practice way of doing it, but for just fixing it super-fast, this worked great.

Maybe there was something missing while installing the Visual Studio. You can check whether you forgot to choose the VC++ toolset.

you can also download and install window 10 sdk autonomously,

using this link windows 10 sdk, and add it into your system path

The Windows SDK you have selected in your project isn't installed.

Either install the SDK you want or select one of installed ones (note: selecting <inherit from parent> option will default to 8.1, which isn't installed by default in VS 2017+)

To install the Windows SDK, run the installer and go to Individual components and scroll to the very bottom: 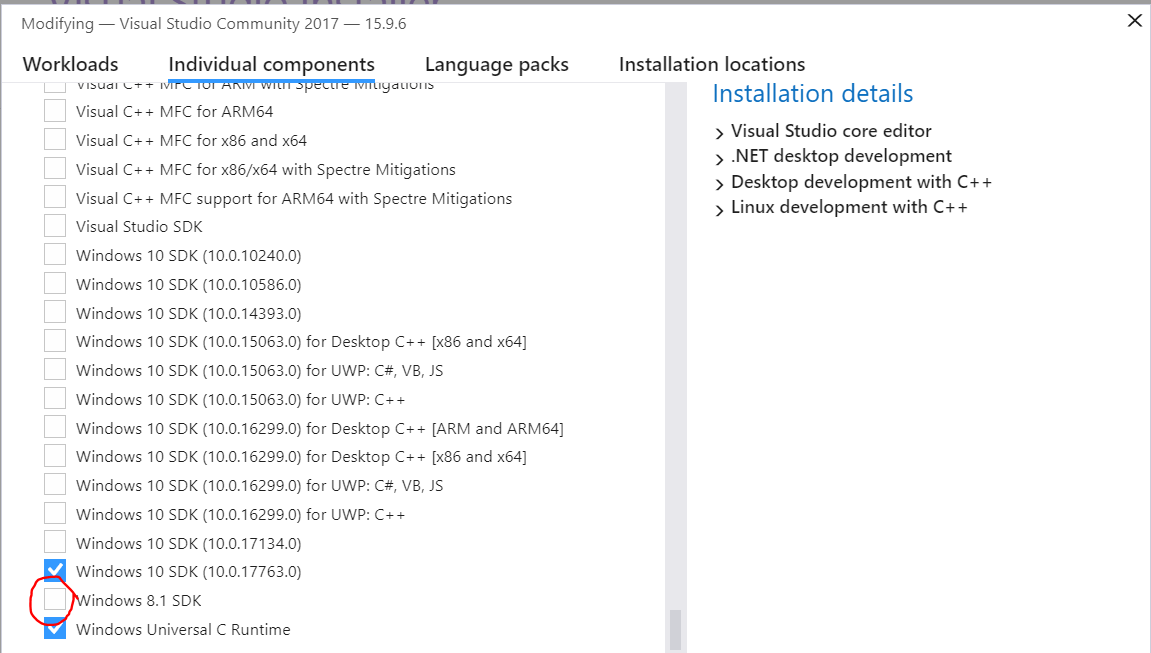 For Visual Studio 2015 Enterprise, I solved the problem in a similar way as parsley72:

For me helps this setting in Visual Studio:

I just got this error while compiling PyTorch on Windows and installing Windows Universal CRT SDK didn't resolved it. After fiddling around it seems there are two causes:

Below fragment in my batch file shows above two steps:

Either add the older Windows SDK (ex. version 8.1 / Universal) to your machine (as described by parsley72), or re-target Project(s) to use one of the Windows SDK(s) installed on your computer.

I just ran into this with VS2017 and re-targeting worked. Though I'm still waiting for an answer on whether targeting a newer Windows SDK version has any ill effects.

I resolve this error by the next 3 step.

Then I rebuild my project and all work properly

Reinstall windows 10 sdk , if you missing windows sdk or if its content changed this error will popup, it happend to me after installing wdk

I have no experience with VC++ but I have to build ta-lib for a python project. Since I do not want to touch anything in VC Studio but I have experienced with regular C programming under Unix, I have taken the approach of adding the include path directly in the Makefile; e.g.:

There are multiple Makefiles under sub-directories so I have had to make changes to each one but it works alright for me.

Not the answer you're looking for? Browse other questions tagged visual-studio-2015 include include-path or ask your own question.

104
Force uninstall of Visual Studio
17
VS2015 cl Can't find CRT libs (stdio.h, ctype.h etc.) when building on command line
0
Visual Studio cannot find Windows 10 mobile emulators
324
ASP.NET 5 MVC: unable to connect to web server 'IIS Express'
1
How to tell Visual Studio 2015 to use the latest UCRT from Windows 10 SDK
0
How many Windows SDKs can I have installed?
245
Could not load file or assembly "System.Net.Http, Version=4.0.0.0, Culture=neutral, PublicKeyToken=b03f5f7f11d50a3a"
8
VS2015 fixing path issue in VC_IncludePath
44
Cannot open include file: 'ctype.h': No such file or directory
0
Facing issue in windows SDK headers are not recursively included in Visual Studio Managed C++ project