How to profile multiple subprocesses using Python multiprocessing and memory_profiler?

I have a utility that spawns multiple workers using the Python multiprocessing module, and I'd like to be able to track their memory usage via the excellent memory_profiler utility, which does everything I want - particularly sampling memory usage over time and plotting the final result (I'm not concerned with the line-by-line memory profiling for this question).

In order to setup this question, I have created a simpler version of the script, that has a worker function which allocates memory similar to the example given in the memory_profiler library. The worker is as follows:

Given a sequential workload of 4 workers as follows:

Running the mprof executable to profile my script takes 70 seconds having each worker run one after the other. The script, run as follows: 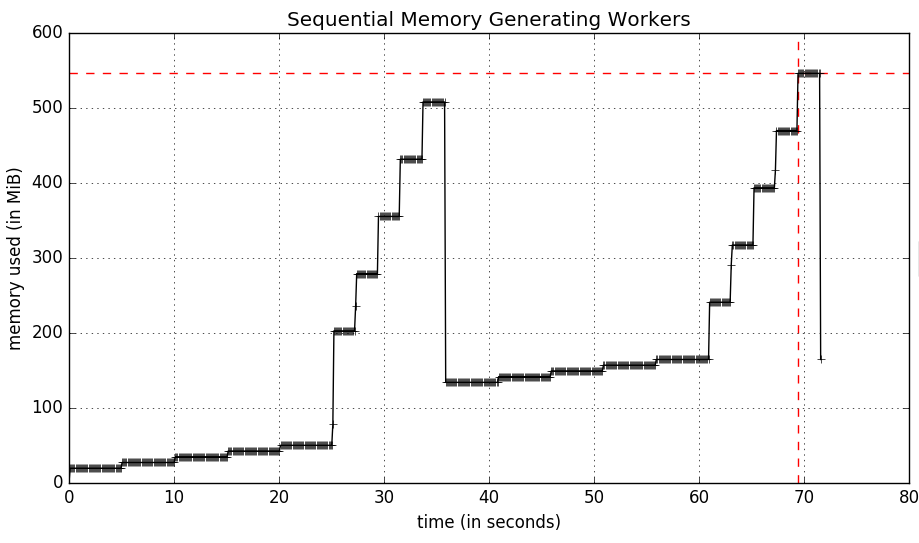 Having these workers go in parallel with multiprocessing means that the script will finish as slow as the slowest worker (25 seconds). That script is as follows:

Memory profiler does indeed work, or at least there are no errors when using mprof but the results are a bit strange: 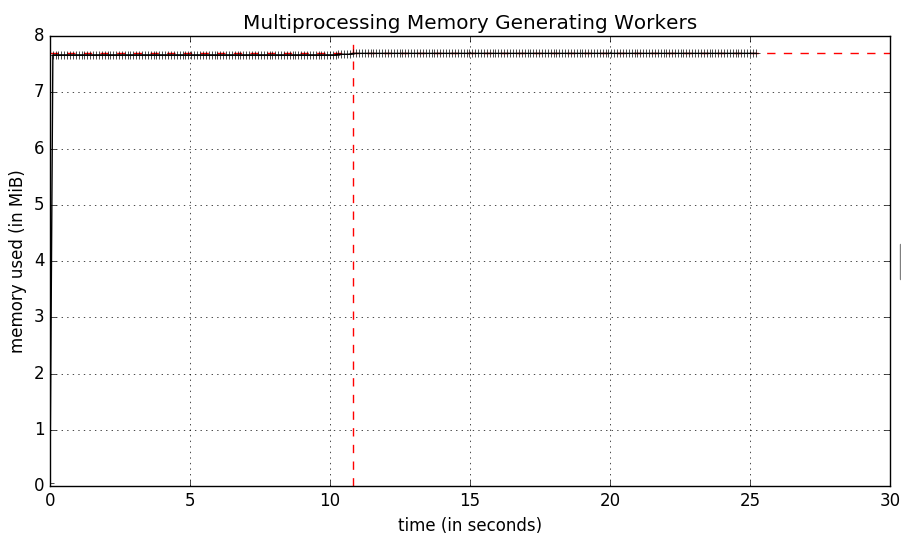 A quick look at Activity Monitor shows that in fact there are 6 Python processes, one for mprof one for python myscript.py and then one for each worker subprocess. It appears that mprof is only measuring the memory usage for the python myscript.py process.

The memory_profiler library is highly customizable, and I'm pretty confident that I should be able to capture the memory of each process and possibly write them out to separate log files by using the library itself. I'm just not sure where to begin or how to approach that level of customization.

After reading through the mprof script I did discover the -C flag which sums up the memory usage of all child (forked) processes. This leads to a (much improved) graph as follows: 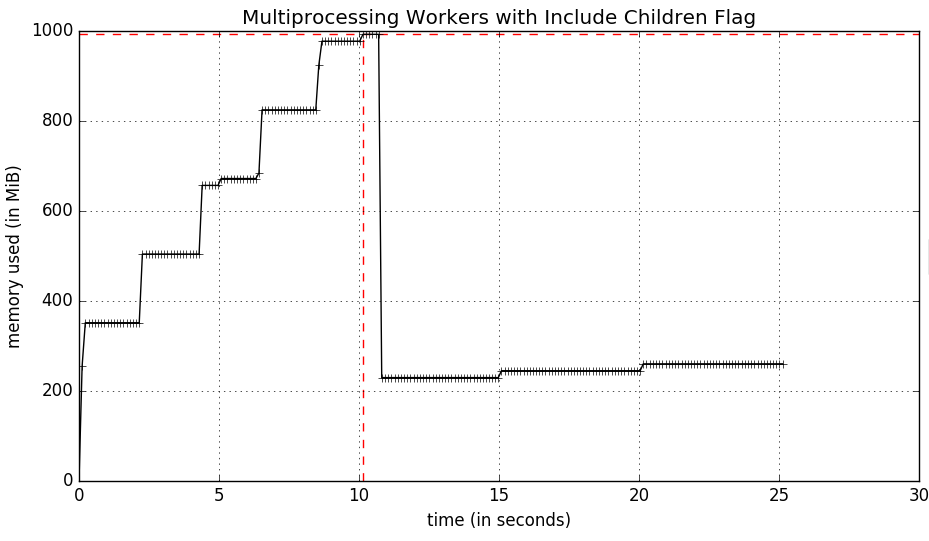 But what I'm looking for is the memory usage of each individual subprocess over time so that I can plot all workers (and the master) on the same graph. My idea is to have each subprocess memory_usage written to a different log file, which I can then visualize.

As of today, a new feature has been added to the memory profiler library that does exactly this. If you need this functionality, first update memory_profiler as follows:

This should install the v0.44 release of memory profiler. To check that this is the case, use the help command on the run action:

If you see the -M flag then you're good to go!

You can then run the your script as follows:

And you should get a figure that looks like this:

Note that if you use the --include-children flag as well, the main process memory will be the total memory usage of the all the children and main, which is also a helpful plot.

Not the answer you're looking for? Browse other questions tagged python python-multiprocessing memory-profiling or ask your own question.

5283
How to execute a program or call a system command from Python
3239
How to get the current time in Python
1407
How can you profile a Python script?
2345
How do I get a substring of a string in Python?
2893
How to make function decorators and chain them together?
2921
How do I concatenate two lists in Python?
2282
How to upgrade all Python packages with pip
2267
How do I lowercase a string in Python?