For the application that I'm currently developing, I want to have a long kernel (that is, a kernel that takes long to finish relative to the others) to execute concurrently with a sequence of multiple shorter kernels that also run concurrently. What makes this more complicated however, is the fact that the four shorter kernels each need to be synchronised after they're done, in order to execute another short kernel that collects and processes the data output by the other short kernels.

The following is a schematic of what I have in mind, with the numbered green bars representing different kernels: 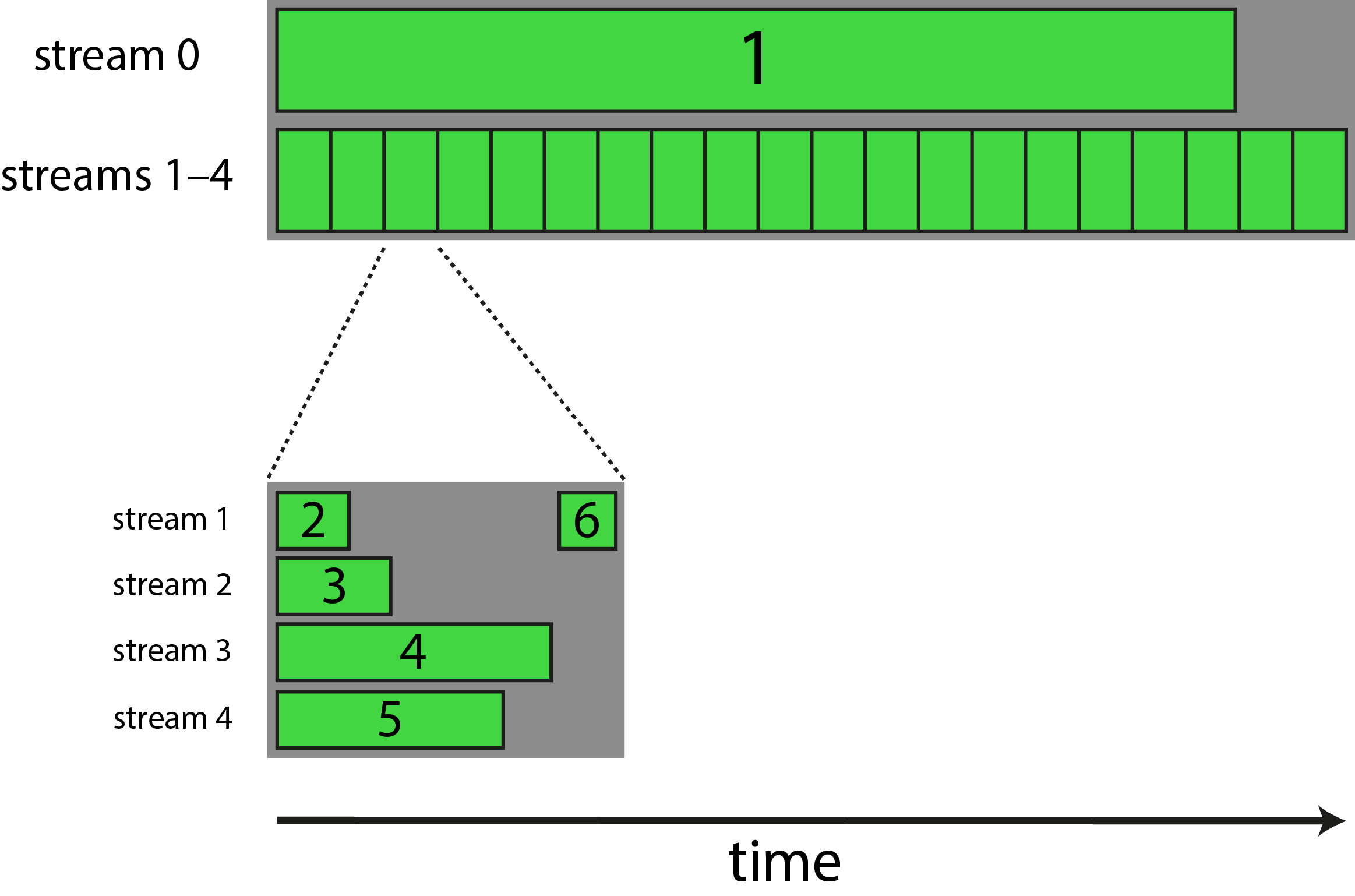 In order to achieve this, I have written code that looks somewhat like the following:

Note: the amount of blocks, threads and shared memory are just arbitrary numbers.

Now, how would I go about properly synchronising kernels 2–5 every iteration? For one, I don't know which of the kernels will take the longest to complete, as this may depend on user input. Furthermore, I've tried using cudaDeviceSynchronize() and cudaStreamSynchronize(), but those more than trebled the total execution time.

Are Cuda events perhaps the way to go? If so, how should I apply them? If not, what would be the proper way to do this?

Thank you very much.

There are two comments that need to be made first.

Your question seems to boil down to "how do I prevent kernel6 from starting until kernel2-5 are finished.

It's possible to use events for this. Basically, you would record an event into each stream, after the kernel2-5 launches, and you would put a cudaStreamWaitEvent call, one for each of the 4 events, prior to the launch of kernel6.

As a result, you may want some kind of synchronization after the above sequence (e.g.cudaStreamSynchronize(stream[1]); ) is performed in a loop, or else the asynchronous nature of all this is going to get hairy to figure out (plus, based on your schematic diagram, it seems you probably don't want kernel2-5 of iteration i+1 to begin until kernel6 of iteration i is finished?) Note that I've left out event creation and perhaps other boilerplate for this, I'm assuming you can figure that out or refer to any of the sample codes that use events, or refer to the documentation.

And even if you implement all this infrastructure, your ability to witness (or not) actual kernel concurrency will be dictated by your kernels themselves, not anything I've suggested in this answer. So if you come back and say "I did that, but my kernels are not running concurrently" that is actually a different question than what you have posed, here, and I would refer you for starters to my comment #2 above.

Not the answer you're looking for? Browse other questions tagged c++ cuda or ask your own question.

0
Is it possible to guarantee each different kernel stream cannot be interleaved?