Why GCC and MSVC std::normal_distribution are different? [duplicate]

I have a simple code sample:

Which I compile on gcc and msvc. I get diferent results on std code!( 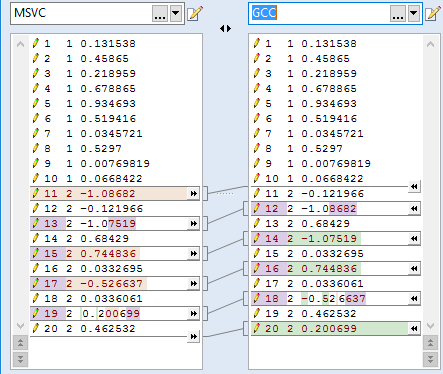 So why GCC and MSVC std::normal_distribution results are diferent for the same seed and generator, and, most importantly, how to force them to be same?

Unlike the PRN generators defined by the standard that must produce the same output for the same seed the standard does not keep that mandate for distrobutions. From [rand.dist.general]/3

The algorithms for producing each of the specified distributions are implementation-defined.

How the implementation does that is up to them.

The only way to get a portable distribution would be to write one yourself or use a third party library.

It's problematic, but the standard unfortunately does not specify in detail what algorithm to use when constructing (many) of the randomly distributed numbers, and there are several valid alternatives, with different benefits.

parameters μ and are also known as this distribution’s mean and standard deviation .

The most common algorithm for generating normally distributed numbers is Box-Muller, but even with that algorithm there are options and variations.

The freedom is even explicitly mentioned in the standard:

3 The algorithms for producing each of the specified distributions are implementation-defined.

A goto option for this is boost random

Further, the random number engines are completely specified and will give the same sequence between implementations, but care does need to be taken since the different distributions can also consume different amounts of random data in order to produce their results, which will put the engines out of sync.

Not the answer you're looking for? Browse other questions tagged c++ visual-studio c++11 gcc visual-c++ or ask your own question.

3630
What are the differences between a pointer variable and a reference variable in C++?
1032
What is the difference between g++ and gcc?
3049
Why is "using namespace std;" considered bad practice?
844
What is std::move(), and when should it be used?
1541
What are rvalues, lvalues, xvalues, glvalues, and prvalues?
629
What are Aggregates and PODs and how/why are they special?
2320
What are the basic rules and idioms for operator overloading?
2232
Why doesn't GCC optimize a*a*a*a*a*a to (a*a*a)*(a*a*a)?
2365
Why are elementwise additions much faster in separate loops than in a combined loop?
650
Are the days of passing const std::string & as a parameter over?