How to create an R Markdown vignette containing plotly graphics

I have an existing R package on CRAN (the rms package) for which I desire to add an html vignette created using R Markdown with RStudio. I see most of what I need in the Writing R Extensions manual and at How to get RStudio to automatically compile R Markdown Vignettes?

What is not obvious is that I want to use plotly functions to create interactive graphics. Self-contained html files using this with RStudio work great but I don't know how to make sure such vignettes work with a CRAN submission, and how to set this up.

Convert this 'test.Rmd' to 'test.md' and finally to 'test.html' by clicking on the Knit HTML button in RStudio OR by running the following script in the console:

This generates an html file with interactive graphics. 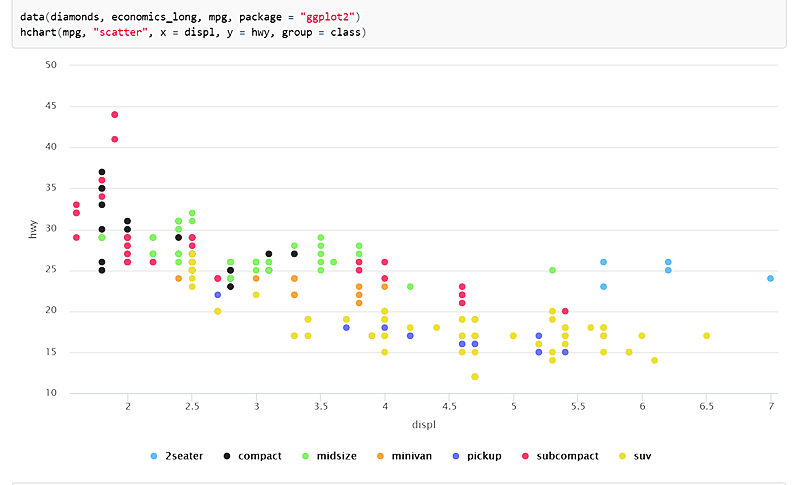 Yes. This is not plotly but highcharter is a nice R package that includes several interactive javascript plotting libraries and it's easy to use. It's also better documented than rCharts for example. The package maintainer is also friendly and responsive to queries. Install highcharter package here:

31
How to get RStudio to automatically compile R Markdown Vignettes?

31
How to get RStudio to automatically compile R Markdown Vignettes?
7
using rmarkdown as a vignette engine
12
How do I 'prebuild' a vignette index for an R package?
2
Vignettes that generate then embed external files: or, best practices for html widgets in vignettes
46
How to get an rmarkdown vignette for R package to escape CRAN warnings on Solaris and OSX
3
R package vignette: no vignette index warning
2
How to embed an rgl snapshot in Rmarkdown package vignette
2
How to change plotly graph size in rmarkdown inline?