How do static variables behave between multiple targets?

I'm having a problem with the behavior of a static variable defined in global scope in an Objective-C .m file. Specifically, I'm seeing different instances of the object referenced by the same variable from the same code depending on the scope when executing from an XCTest target.

How does a global static variable, defined in a .m file, behave between the main and XCTest targets? Here's an example of the problem I'm seeing:

The Meat Of The Confusion

I'm attempting to write XCTest unit tests that leverage Manager. The thing is, I'm seeing different instances of Manager from within the same flow of code execution depending on the context of the code. This was totally new and weird to me. For example, consider this unit test:

Important point Often the memory address of a NSLog'd object is different from the debugger po'd object. I don't know why. I'm guessing it is related to how XCTest executes in a different "app" instance?

The behavior I'm observing is that within the same flow of code, access of a static global variable within a .m file varies depending on which file is accessing it. Why?

I posted a fully functional, bare bones, project demonstrating this on GitHub at: https://github.com/obuseme/TestStatic

When I tried recreating the problem by hand in a fresh project, I got:

This is as expected. Your different results suggests that there's something strange in your project settings. I then downloaded your project and reproduced what you described. An important warning appears in the log: 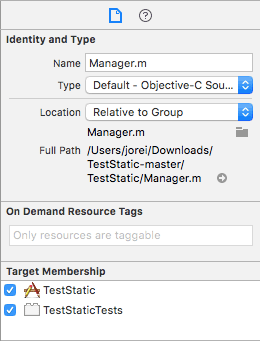 There are two occurrences of Manager.m. Each has its own copy of the sharedManager static variable.

Not the answer you're looking for? Browse other questions tagged ios objective-c iphone xcode xctest or ask your own question.

616
How can I indent multiple lines in Xcode?
171
What is the best way to deal with the NSDateFormatter locale "feechur"?
359
How to pass prepareForSegue: an object
2
FaceBook Connect. Login on tap
4
didEnterRegion of LocationManager not called ever
0
ViewControllers as instance variables
623
iOS app with framework crashed on device, dyld: Library not loaded, Xcode 6 Beta
0
How to call method in ViewController from SKScene
2
iOS 8.1 Only Displaying UITextView Intermittently
0
UITextField control losing delegate reference ID