Why can a class not be defined as protected?

Why can we not define a class as protected?

I know that we can't, but why? There should be some specific reason.

Because it makes no sense.

Protected class member (method or variable) is just like package-private (default visibility), except that it also can be accessed from subclasses.
Since there's no such concept as 'subpackage' or 'package-inheritance' in Java, declaring class protected or package-private would be the same thing.

You can declare nested and inner classes as protected or private, though.

So If we are allowed to make a class protected then we can access it inside the package very easily but for accessing that class outside of the package we first need to extend that entity in which this class is defined which is its package.

And since a package can not be extended (can be imported), defining a class protected will again make it package-private which is similar to defining it as default which we can already do. Therefore there is no benefit of defining a class private it will only make things ambiguous.

@Nikita Rybak answer has good points but lack of details, i can't simply get the idea without think deeply myself, the following is what i thought and now i should completely understood the reason.

Four access modifiers, assume the 1st level is public and 4th level is private (based on this table in sequence). The first thing we should know is why class cannot defined as private in top-level.

So if "private class foo"(A private member defined, i.e. class itself is a member) allow, what is the outer (which contains the member) ? File scope ? No, file outer is pointless because even multiple classes in single file will be compile into separate class files. So the outer is package. But the 3rd level default access modifier already means "package-private". So the 4th level private access modifier will not be used/allowed.

But nested private class is allow because the direct outer is class, not package, e.g.:

Now what if "protected class foo" allow ? protected main characteristic is subclass, so the outer(package) SHOULD(due to up-to scope, but still it's optional) provide style of subclass, i.e. sub-package, or package A extends package B, but we know no such thing. So protected can't use full potential(main scope is subclass-wide) in top-level which the outer is package(i.e. no such sub-package thing), but protected can use full potential in nested class which the outer is class(i.e. can be subclass):

Note that the above said "can't use full potential" due to it can't reach subclass-wide merely because no outer subclass, that's means actually protected can be allow, it's just a matter of choice to avoid duplicate the job of package-private if outer not subclass-able, see below.

My confusing is mainly caused by the famous table at https://docs.oracle.com/javase/tutorial/java/javaOO/accesscontrol.html: 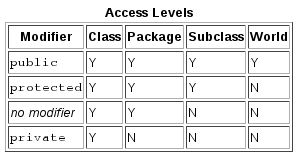 If 1st level(public) and 3rd level (package-private) allowed, how on earth the in-between 2nd level (protected) not allowed ?

public support subclass so easy to misleading. The correct way to read this table is

public support subclass if the outer has subclass feature.

That's means we should ignore the Subclass column if subclass feature is not available in outer: 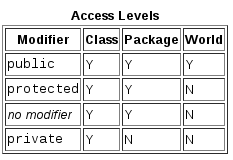 As we can see now, both protected and package-private are the same level now (Y-Y-N), no more confusion about why in-between level is not allowed. Overall, Java pick only package-private over protected to avoid confusing(it's just a matter of choice, but protected main characteristic is subclass, so package-private is superior), and the result, only 2 access modifiers allowed in top-level:

At the top level—public, or package-private (no explicit modifier).

Protected is not similar to public. Protected has both package level access plus can be accessed outside of packages only by inheritance..If a class say A outside a package INHERITS a class from other package(with protected method by using INHERITANCE) it can access the methods of this class B which has protected methods but the sub-classes derived from this class i.e., A can't access the protected methods..the opposite happens with public..

if a outer class is declared by protected, I think you want the class can be only accessed from same package and its subclass but different packages. However, there is no possible to create subclasses for a protected class, because when you write "class Dog extends Animal", because of protected "Animal" only can be accessed by its subclass, obviously, "Dog" is not "Animal" subclass.

behavior of “protected” = behavior of “default”+ “use it in any subclass in any package”.

Anyway we have default access modifier for class, only advantage we can get from protected access modifier is:- by using it in any package through subclassing. But for subclass, visibility of parent “protected”class would be private. So it can’t be accessed. Basically if you have a protected top-level class, no outer class can gain access by subclassing it. So protected for a top-level class is meaningless.

Protected : VISIBLE only to package level*.

class is defined protected ---> it cannot be extended from outside package(not visible).

And if it cannot be extended then it is meaningless to keep it as protected, because then it will become default access which is allowed.

Note : Nested or inner classes can be defined protected or private.

* : Explore protected keyword, for this answer I made it succinct.

The answer from @Akash5288 made no sense to me:

If all the classes are allowed to subclass then it will be similar to public access specifier.

The answer "you can not extend a class you can not access/see" is more logical.

What makes sense to this question is that, JVM is written in C (Sun JVM) and C++(oracle JVM) so during compilation, we are going to create .class files out of our java file and if we declare a class with Protected keyword then it will not be accessed by JVM.

The answer why protected class will not be accessed by JVM is that, since protected fields are accessible within same package or to diffrent package through inheritance only and JVM is not written in a way so that it will inherit will class. Hope this satisfies this question :)

Similarly, A top level class can't be private. Explanation as below:

So what will happen if we will define a class private, that class will only be accessible within the entity in which it is defined which in our case is its package?

So defining private access to the class will make it accessible inside the same package which default keyword already do for us, Therefore there is no benefit of defining a class private it will only make things ambiguous.

protected means that the member can be accessed by any class in the same package and by sub classes even if they are in another packages.

Not the answer you're looking for? Browse other questions tagged java class protected or ask your own question.

2
Why interface and abstract class could have default access modfier and not protected
119
Can a java file have more than one class?
47
How to protect classes so they are not visible outside their package
27
What does the "private package" mean?
6
Why a class containg a main method doesn't need to be public in Java?
6
Is it possible for an interface to be accessible only in the same package and child packages?
0
Protected modifier for Outer class
-4
How do I inherit a class in java, when the sub- and super-classes are in different packages

3507
What is the difference between public, protected, package-private and private in Java?
1278
Iterating through a Collection, avoiding ConcurrentModificationException when removing objects in a loop
3930
How do I generate random integers within a specific range in Java?
1974
Does Java support default parameter values?
1265
What is the `self` parameter in class methods?
2182
What is a JavaBean exactly?
1566
Why do Python classes inherit object?
7368
Why is subtracting these two times (in 1927) giving a strange result?
26473
Why is processing a sorted array faster than processing an unsorted array?
1736
What does "Could not find or load main class" mean?