I'm spoiled by OS install statistics, like Android's. Of course, the collection methods used there aren't available to Python. For Java, I found this, which certainly isn't official, and the methodology leaves a lot to be desired, but that's the kind of thing I'm interested in.

There was a survey in 2014 on usage statistics, mostly on 2.x vs 3.x. But not including platforms/devices. 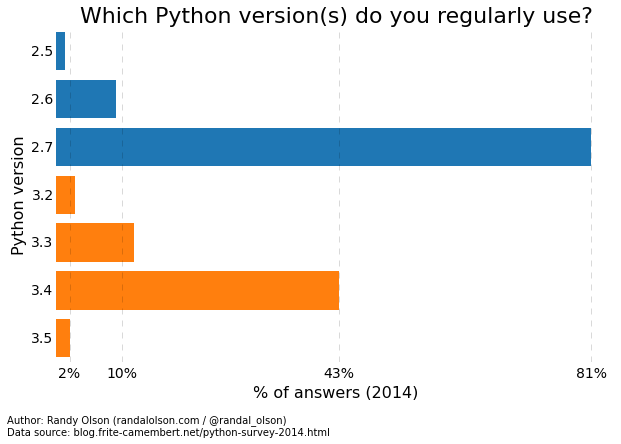 The website credited with the underlying data is here.

And there is always google trends, which obviously is not a usage breakdown but rather a more general account of how popular search terms are. It would allow for search terms such as "python android" and "python iOS". See here:

I think checking distributions such as Anaconda would be a way of approximating python version and OSs. Unfortunately, the Anaconda website does not include a number-of-downloads tracker that is rather common. Another approximation would be the number of commits for Spyder releases on GitHub.

Not the answer you're looking for? Browse other questions tagged python or ask your own question.

6570
What are metaclasses in Python?
3182
How to copy files?
5068
How can I safely create a nested directory?
7140
Does Python have a ternary conditional operator?
3458
How to get the current time in Python
1398
Use different Python version with virtualenv
3202
How do I concatenate two lists in Python?
2767
Manually raising (throwing) an exception in Python
3591
Does Python have a string 'contains' substring method?