Ignoring GEM because its extensions are not built

On both my work and home computers, I recently upgraded Ruby to 2.3.1, using ruby-install. I use chruby as my Ruby switcher.

I started seeing this warning in my terminal:

On my work, computer, the list was much longer, but easy to resolve. When I tried the suggested gem pristine GEM, it told me it couldn't find the gem, so I ran gem install GEM, and that solved it.

At home, nothing is working.

Things I have tried, from common sense and various other Stack questions:

I came across this exact issue today - getting warnings like this for gems that weren't even installed!

Switching to all the different rubies and running gem pristine --all on all of them solved the problem.

I ran into this issue and followed all the same commands as above, even going so far as to remove all my previously installed Ruby versions. However, the error persisted.

Turns out, there were some leftover gems for the various (previously uninstalled) versions in ~/.gem/ruby/. After removing the folders I no longer used, the errors disappeared.

I've had this problem today too and it frustrated because I couldn't type because my whole editor flashed red with error messages.

The gem command also gets overwritten when you have rbenv and rvm.

See which ones you've installed by typing;

If one of those is installed it'll return a path. Then delete them, make sure to completely clean out all the directories and start with a clean install.

Here's what I did for rvm;

Here's what I did for rbenv

Then you have a clean home directory to work from. I reïnstalled rbenv with How to install Ruby 2.1.4 on Ubuntu 14.04. And finally;

I did everything mentioned above including

but the issue was the same for me. I just rebooted my Mac as the last hope, and the warning messages are disappeared.

Weird, but if anyone's struggling with this issue after trying everything on StackOverflow, try reboot your machine.

Adding my own flavor here. I use rbenv installed via Homebrew and was getting four of these "ignoring... extensions not built" messages. Specifically:

I tried many things in this thread with no luck. Finally in my case I did:

At this point I was still getting the errors, but now I had only a single Ruby version to contend with:

At this point I tried sudo gem pristine --all but was rejected for permissions on the system Gems directory.

So I went through and ran pristine on each gem, like

And finally the errors were gone.

Running gem pristine --all didn't help at first, but then I realized: the script I was running began with the line:

On my macOS system (Catalina, but I don't think it matters), this points to the Ruby that came with the system, not the one installed by RVM. Running gem pristine --all was fixing up the RVM installation, but my script was calling a different version of Ruby.

The fix for me was to use the env command to call whichever Ruby is specified in the current shell's PATH. Changing the top line of the script to this fixed it:

Check and remove useless versions, but I think this is not good approach. Anyway errors gone.

After refresh cocoapods, it should be injected in .rvm GEM_HOME

TL;DR - Ruby gems don't like Rubies running from symlinks or moved from where they were built (because of embedded shebangs)

If the Ruby directory is invoked or environment vars point to a symlink'ed directory, or are copied or renamed, this message is likely. I am using chruby and was symlinking /opt/rubies/ -> /usr/local/ruby/, but Ruby's dynamic library-finding logic doesn't play well with this.

The solution in my case was to replace the symlink with actual rubies in /opt/rubies/ and run gem pristine --all in each Ruby. For others using RVM or Rbenv, good luck with that without starting over from scratch.

This may not be your exact issue, but hopefully it helps.

Having come across this exact problem today, and gone through all the answers here I eventually stumbled across another reason for this error:

Ignoring nokogiri 1.10.7 because its extensions are not built. Try: gem pristine nokogiri --version 1.10.7

And of course gem pristine did no work.

My problem was a hard coded GEM_HOME and GEM_PATH environment variables which were overriding rbenv.

So, check that you haven't set GEM_PATH and GEM_HOME in ~/.zshrc

In my case the warning itself has suggested the solution , so I just run them one by one.

so running the command of each line has solved my problem.

Most comments here are on the right track. This problem often occurs after a Ruby version upgrade. I reviewed the gem command code and here is the gist of it.

Extensions are compiled into the gems/gem/ext subdirectory of the gems home directory. For example, on my Cygwin installation (and similarly under Raspbian), the BigDecimal extension is compiled into /usr/share/gems/gems/bigdecimal-1.3.5/ext/bigdecimal/bigdecimal.so.

Here is the key: in this same directory, there is an empty tag file /usr/lib/gems/ruby/2.3.0/bigdecimal-1.3.5/gem.build_complete

When the gem command starts up, it refers to the gems/specifications directory to get a list of installed gems and information as to whether they have extensions. If a gem does have extensions, gem (among other sanity checks) looks for the tag file gem.build_complete. If that is not found, it emits the error message "Ignoring gem because its extensions are not built".

This is an old thread, but I just came across this issue myself.

You don't need to restart your machine, you just need to refresh your environment, you can do this with the rehash command:

From the man page: rehash command re-computes the internal hash table of the contents of directories listed in the path environmental variable to account for new commands added.

Libby's suggestion to just start a new terminal session (which she commented on Sebastian Kim's answer) worked for me. Much quicker than any of the others too so I wanted to make it an answer so it was more visible.

This is also a problem when you're developing on Mac and then build a Docker image: https://forums.aws.amazon.com/thread.jspa?messageID=879802&tstart=0

When you do a "bundle install --deployment", bundler will create a vendor directory w/ your gems in it. Note that whilst this includes your gems in the local folder, it will only include the native extensions for your platform. As you're on macOS this will be Darwin. You'll need to do repeat the process on a 64-bit x86 linux environment.

I had this problem but only when I was starting tmux session using tmuxinator.

Turned out it's because I'm using tmuxinator from brew instead of installing it using gem install. Maybe using chruby at the same time contributed to the problem as well.

p/s: I also removed unused ruby from ~/.gem/ruby but I doubt that's the reason this issue was resolved for me.

Uninstall and reinstall of Vagrant also works. There's an unistall.tool bash script included in the installer .dmg image that will remove Vagrant.

Found this solution here: Updating Vagrant and Gems Extentions Not Built In

I had the same issue and I'm using rbenv. For some reason my global rbenv setting went missing. In order to fix this problem I set the global version to one of my rbenv versions... for instance:

On my case I was trying to run pristine --all but I was getting:

Then, I deleted the content on Users/{{user.name}}⁩/⁨.gem⁩ then as I needed to run bundle install --force, it reinstalled everything, then the command pristine --all worked as expected

This solution worked for me for RubyMine IntelliJ

I had two different terminals being used and RVM and ruby<Version>. 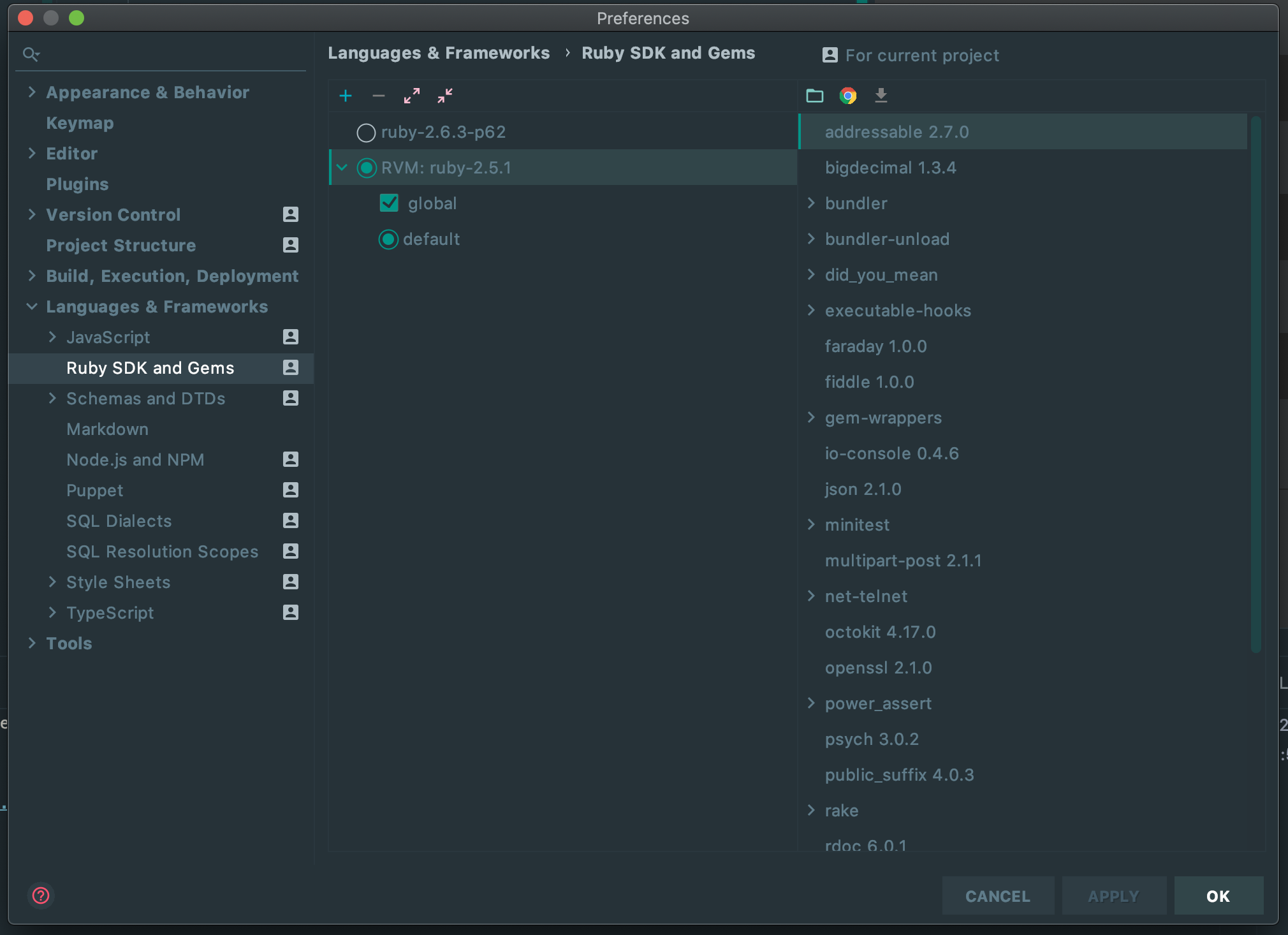 If you are using rvm like me, the fix could a simple:

As stated in this answer https://apple.stackexchange.com/a/192513

I have executed these commands in Terminal and worked for me:

In Ubuntu this worked for me.

Not the answer you're looking for? Browse other questions tagged ruby rubygems chruby or ask your own question.

15
Ignoring gems because its extensions are not built
120
How to install Ruby 2.1.4 on Ubuntu 14.04
4
When/why to use --env-shebang with ruby gems?
15
Flutter Ignoring ffi-1.12.2 because its extensions are not built. Try: gem pristine ffi --version 1.12.2
1
How to package local gems to be used on different Linux host
1
Updating Vagrant and Gems Extentions Not Built In
-1
fatal: incompatible library version - /Users/xxx/.vim/bundle/command-t/ruby/command-t/ext.bundle
0
I installed rails 6 beta, but I can't start my sample application