Both child and parent are clickable (child could be a link or div with jQuery click events). When I click on child, how do I only trigger parent click event but not the child event?

Events also have a "default action", which happens after the bubbling phase. The default action is the browser-defined action that normally occurs for events of the specified type on the kind of element which is the target of the event (e.g. the browser navigating to the href of an <a> upon a click, whereas a click on another type of element will have a different default action).

The DOM Level 3 Events draft has a diagram that graphically shows how events propagate through the DOM: 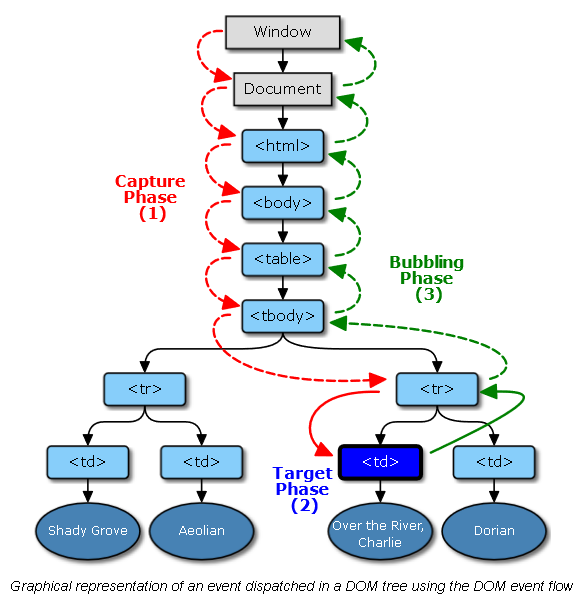 For more information, on capture and bubbling, see: "What is event bubbling and capturing?"; The DOM Level 3 Events draft; or W3C DOM4: Events

Preventing the event from getting to the child

For what you want, to get the event on the parent prior to, and prevent, the event on the child, you have to receive the event in the capture phase. Once you have received it in the capture phase, you have to stop the event from propagating to any event handlers on elements lower in the DOM tree, or which have registered to listen in the bubbling phase (i.e. all listeners on elements/phases which would be visited by the event after your listener). You do this by calling event.stopPropagation().

Receiving events during the capture phase

When adding the listener with addEventListener(type, listener[, useCapture]), you can have the useCapture argument be true.

[useCapture is] A Boolean that indicates that events of this type will be dispatched to the registered listener before being dispatched to any EventTarget beneath it in the DOM tree. Events that are bubbling upward through the tree will not trigger a listener designated to use capture. Event bubbling and capturing are two ways of propagating events that occur in an element that is nested within another element, when both elements have registered a handle for that event. The event propagation mode determines the order in which elements receive the event. See DOM Level 3 Events and JavaScript Event order for a detailed explanation. If not specified, useCapture defaults to false.

Preventing other handlers getting the event

Another option for this that may be useful in certain circumstances when you know that none of the child elements are interactive is to set pointer-events: none in your css (link). I usually apply it to all child elements of the element on which I want to capture interaction. Like this:

Note the *, declaring that the rule applies to all children of the parentDiv.

(Note that the second parameter is true)

You can use the CustomEvents property on elements.

Not the answer you're looking for? Browse other questions tagged javascript jquery css html or ask your own question.

4740
How to create a GUID / UUID
7626
How do JavaScript closures work?
1366
Trigger a button click with JavaScript on the Enter key in a text box
2333
How to get the children of the $(this) selector?
5502
What's the difference between using "let" and "var"?
2422
How do I give text or an image a transparent background using CSS?
5716
How to disable text selection highlighting
3659
Is there a CSS parent selector?
8049
What does "use strict" do in JavaScript, and what is the reasoning behind it?
3130
event.preventDefault() vs. return false