I have this simple input in my component which uses [(ngModel)] :

And I get the following error when I launch my app, even if the component is not displayed.

Yes, that's it. In the app.module.ts file, I just added:

In order to be able to use two-way data binding for form inputs you need to import the FormsModule package in your Angular module.

For more information, see the Angular 2 official tutorial here and the official documentation for forms.

Also, it is in this path under forms in the Angular repository on GitHub:

Probably this is not a very pleasurable for the AngularJS developers as you could use ng-model everywhere anytime before, but as Angular tries to separate modules to use whatever you'd like you to want to use at the time, ngModel is in FormsModule now.

Also, if you are using ReactiveFormsModule it needs to import it too.

So simply look for app.module.ts and make sure you have FormsModule imported in...

Also, these are the current starting comments for Angular4 ngModel in FormsModule:

If you'd like to use your input, not in a form, you can use it with ngModelOptions and make standalone true...

For more information, look at ng_model in the Angular section here.

To resolve We must include FormModule in the app.module.ts file to avoid the Can't bind to ngModel as it isn't a known property of 'input' problem in Angular apps.

The steps are as follows,

and add FormsModule to imports

Assuming you have created a new NgModule, say AuthModule dedicated to handling your authentication needs, make sure to import FormsModule in that AuthModule too.

If you'll be using the FormsModule only in the AuthModule then you wouldn't need to import the FormModule in the default AppModule.

Then forget about importing in AppModule if you don't use the FormsModule anywhere else. 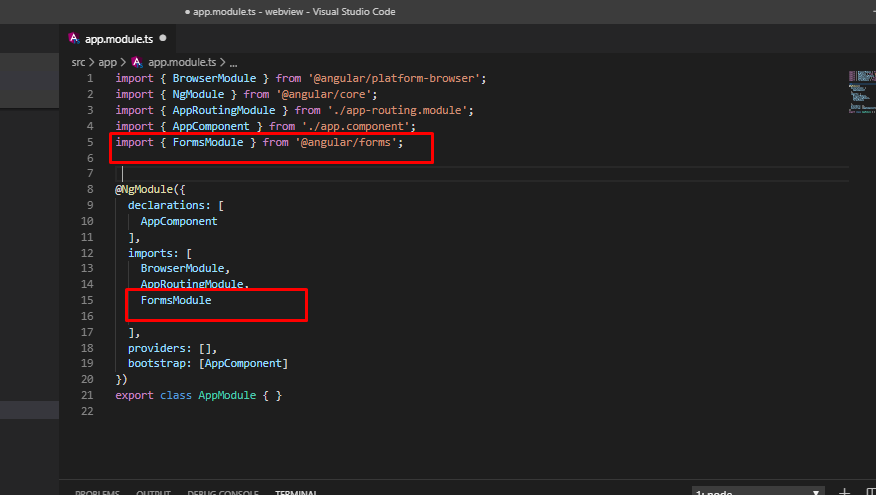 If you want to use [(ngModel)] then you have to import FormsModule in app.module.ts:

There are two steps you need to follow to get rid of this error:

Sometimes, even though we are already imported BrowserModule, FormsModule and other related modules, we still may get the same error.

Then I realized that we need to import them in order, which is missed in my case. So the order should be like BrowserModule, FormsModule, and ReactiveFormsModule.

As per my understanding, feature modules should follow the basic modules of Angular.

I am using Angular 7.

I have to import ReactiveFormsModule, because I am using the FormBuilder class to create a reactive form.

You need to import FormsModule in your root module if this component is in the root i.e. app.module.ts

Import FormsModule in you app module.

It would let your application run well.

In my case, I needed to import ReactiveFormsModule too.

I know this question is about Angular 2, but I am on Angular 4 and none of these answers helped.

In Angular 4 the syntax needs to be

If you are still getting the error after importing FormsModule correctly then check in your terminal or (windows console) because your project is not compiling (because of another error that could be anything) and your solution has not been reflected in your browser!

In my case, my console had the following unrelated error:

ngModel is coming from FormsModule. There are some cases when you can receive this kind of error:

You need to import the FormsModule in app.module.ts and add the lines

The ngModel directive declared in the FormsModule lets you bind controls in your template-driven form to properties in your data model. When you include the directive using the syntax for two-way data binding, [(ngModel)], Angular can track the value and user interaction of the control and keep the view synced with the model.

In ngModule you need to import FormsModule, because ngModel is coming from FormsModule. Please modify your app.module.ts like the below code I have shared

For my scenario, I had to import both [CommonModule] and [FormsModule] to my module

ngModel should be imported from @angular/forms because it is the part of FormsModule. So I advice you to change your app.module.ts in something like this:

Sometimes you get this error when you try to use a component from a module, which is not shared, in a different module.

Declaring the MenuComponent solved my issue. I.e., as shown in the below image:

This is for the folks who use plain JavaScript instead of Type Script. In addition to referencing the forms script file on top of the page like below:

You should also tell the the module loader to load the ng.forms.FormsModule. After making the changes my imports property of NgModule method looked like below:

I upgraded from RC1 to RC5 and received this error.

I completed my migration (introducing a new app.module.ts file, changing package.json to include new versions and missing modules, and finally changing my main.ts to boot accordingly, based on the Angular2 quick start example).

I did an npm update and then an npm outdated to confirm the versions installed were correct, still no luck.

I ended up completely wiping the node_modules folder and reinstalling with npm install - Voila! Problem solved.