So, using Subversion mirror(SubGit) with latest BitBucket (4.8.3). There are two changes made to master. One made directly and one made with a merge from a feature branch. When pushing the changes, get a SubGit error:

I'm sure I've done this in the past and it worked just fine. I will try reverting back and doing this again, but just wondering if others have seen this error and know what it means.

This error message was introduced with SubGit version 3.2.1 and SVN Mirror add-on version 3.3.0.

SubGit/SVN Mirror rejects push operation that would result into branch replacement in Subversion repository. There are basically two cases when Git changes may lead to replacements on SVN side:

And so we made sure that SubGit does not replace branches in these two scenarios unless SubGit administrator explicitly sets the following configuration option:

However, I'd recommend to keep svn.allowBranchReplacement set to false and follow these best practices to avoid the error message reported in the original question:

If you're using SVN Mirror add-on, you can specify svn.allowBranchReplacement option at the Branches Mapping tab: 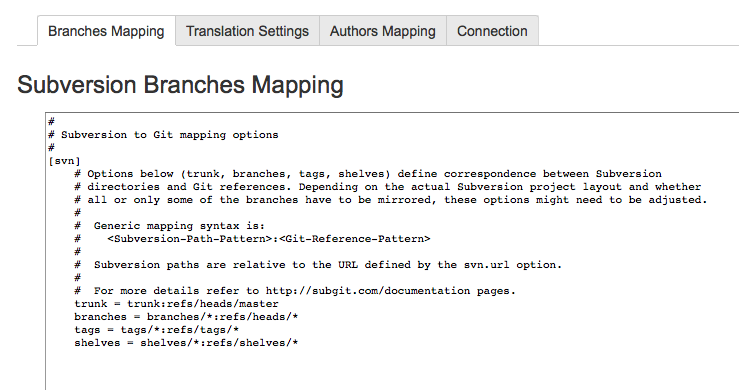 The text field should look as follows:

and then click on Apply changes button in order to activate this new setting.

Not the answer you're looking for? Browse other questions tagged git svn bitbucket subgit or ask your own question.

1007
Git workflow and rebase vs merge questions
4784
How do I push a new local branch to a remote Git repository and track it too?
984
Git push error '[remote rejected] master -> master (branch is currently checked out)'
431
Heroku: How to push different local Git branches to Heroku/master
769
Cleaning up old remote git branches
2533
How do you push a tag to a remote repository using Git?
1453
How do I properly force a Git push?
475
Git and nasty “error: cannot lock existing info/refs fatal”
1143
Changing git commit message after push (given that no one pulled from remote)
887
Force “git push” to overwrite remote files