How to npm publish specific folder but as package root

I have a project that include a gulp task for building and packaging the sources and release in a directory called dist. My goal is publish it as a npm package, but only my dist folder. The npm documentation says that I can use the files tag to specify files to export. It works. But, documentation also says that:

If you name a folder in the array, then it will also include the files inside that folder

The result, is a npm package, which node_modules looks like: 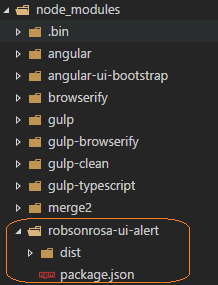 But I'd like to see all my files at the package's root (without that dist folder). My index.js file is inside the dist folder, but should be at root. I've tried to set tag files as /dist/**/* but it didn't work.

How can I achieve it?

I have the same desire but I think there is no way of accomplishing this with only using npm tooling. Another script/tool could be used to arrange your package.

Currently I am copying my package.json into the dist folder and then running npm pack inside the dist folder. I think this essentially provides the desired arrangement of our package.

Here is some relevant reading on this npm design: Why no Directories.lib in Node.

It's also interesting to note that jspm DOES respect the directories.lib option in package.json and rearranges the files when resolving the npm package. This all has come about for me because I am wanting to build a common library which can be consumed by jspm or npm/webpack.

I have a similar problem to the original poster (@robsonrosa). In my case I use typecript which compiles to a dist directory. While I could make typescript compile to the root directory I think the best solution is to generate a separate package.json file in the dist directory.
This is similar to @scvnc suggestion of copying the package.json but with a twist:

I was asked for a solution in the comments. So here is some code I am using. This should be considered as an example it is not meant to be generic and is specific to my projects.

I want to package only the dist directory and the directory should be the root directory in the package.

I.e. unit tests (spec files) and typescript map files are ignored as well as the SetupPackage.js file and the version.txt file it creates. This leaves a clean package.

Finally the main package.json file has the following scripts for use by the build system (assumes sh is used as the shell).

To build the package the build system clones the repo, does npm install and then runs npm run buildpackage which in turn:

I use the version.txt file as an easy way to get the version in package.json and to tag my repo. There are countless other ways to do this or you may want to auto-increment the version. Remove this from SetupPackage.ts and .npmignore if it is not useful to you.

If you are (and I recommend) using semantic-release, add the pkgRoot option in the .releaserc.json file. (You should also install rjp):

That'll take care of the problem. Just make sure your dist folder contains a package.json file. You can easily do that by adding a cp to your postbuild script:

If your project has git you can use small hack. Add next scripts to package.json

now when you run publish command npm involve prepublishOnly. It builds files and saves them to lib folder (a build script depend on your project). The next command copies files to root folder and removes lib. After publish postpublish script returns the project to a previous state.

The tarball will be created inside the TMPDIR directory.

I highly recommend you to use .npmignore instead of moving or copying things around, specially if you are using a CI for deployments, and just add there the files you don't want to publish.

If you want to split your code, into different npm packages using the same repo, I bumped into this project recently: Lerna and looks really good.

Maybe you should take a look

You need to publish the dist folder

The natural way to achieve that, according to the npm approach, is to publish the folder which is to be the root. There are several ways to do that, depends on the final environment you want to work with:

Prerequisite: in any case above, prior to the publish/install/link, you have to put in your dist folder at least a proper package.json file. In your case, you have to have the package name defined in your package.json file as "name": "robsonrosa-ui-alert". Typically, you'll want there also some other files like README.md or LICENSE.

Typically there are problems with package dependencies when you use the package installed this way. To avoid it, first pack the package with npm pack dist and then install the package in the target project from the packed tarball, i.e. npm install path/to/package-tarball.tgz.

You can automate the publishing process using the prepare script, combined with build script. Additionally, you can protect your package against an accidental publishing of the package root folder with "private": true field put in the package.json, located in the root directory of your package repo. Here is an example:

This way you won't publish the root folder and get the package built and package.json copied to the dist folder automatically, within the publishing process.

I have a Typescript project which compiles into a folder called dist and I have found a solution for Windows.

In my package.json at the root of my project:

These scripts allow me to publish my dist folder as the root of my package by running npm run pub.

This way, I can still have all the relevant configuration files in my project root but I can copy them to dist before publishing.

The same approach can probably work for Mac or Linux.

I am using these commands from Jenkins to publish packages.

My situation was similar but hairier at the same time since it involved publishing through a CI pipeline that was mostly out of my control, and which it and only it had publishing permissions through a .npmrc file it downloaded during its execution. And since it had to be shared with countless other teams and repositories, it had to be agnostic to the specifics of each repository.

After a lot of time wasted trying to copy over the .npmrc file to the npm's global root, which more often than not ended in permission warnings, trying to use different scripts in package.json which called upon the global npm instead and getting 403 HTTP errors, the solution finally dawned on me, and it couldn't be simpler if I tried.

All it took was including a shell script (could also be a batch file if the container ran Windows) in the application, checking for its existence in the pipeline and running it instead of npm publish.

Since nowadays the syntax npm publish [folder] exists, my script was pretty straightforward, but I can see how in different times it could have looked like @Eli Algranti's script.

So here's how it looked in the end:

This ran locally, with the current user and the .npmrc file that had already been copied, and could encapsulate a lot of other logic if necessary

I achieve this by doing the following:

option 1: Navigate to the folder and execute "npm publish ." command

You can specify the directory you wish to publish. This is what I came up with for Typescript on Linux.

Thanks to @EnderShadow8 for the inspiration.

Here is one more approach which I think is the cleanest. It's all configuration based without needing to move files or specify paths in the build and pack scripts:

Just create a .npmignore file and add the following to it :

12
How to remove the output folder from the import statements for my package users?
1
Remove dist from the import path
1
How to exclude the folder but include all of its files and sub-folder while npm publish in angular library
1
npm publish specify publish directory in package.json

2010
How can I update NodeJS and NPM to their latest versions?
2796
Find the version of an installed npm package
1365
How can I uninstall npm modules in Node.js?
1129
How to install a previous exact version of a NPM package?
1442
How to fix npm throwing error without sudo
1134
How to install an npm package from GitHub directly
340
How to include scripts located inside the node_modules folder?
206
How can I publish an npm package with distribution files?
2215
Do I commit the package-lock.json file created by npm 5?