What's the best way to implement a non-blocking socket in Java?

Or is there such a thing? I have a program that communicates with a server through socket but I don't want the socket call to block/cause delay if there is a problem with the data/connection.

Java non-blocking socket was introduced in Java 2 Standard Edition 1.4. It allows net communication between applications using the sockets without blocking the processes. But Teo, what a non-blocking socket is?, in which contexts it can be useful?, and how it works? Okay young Padawan lets answer this questions.

What a non-blocking socket is?

A non-blocking socket allows I/O operation on a channel without blocking the processes using it. This means, we can use a single thread to handle multiple concurrent connections and gain an "asynchronous high-performance" read/write operations (some people may not agreed with that)

Ok, in which contexts it can be useful?

Suppose you would like to implement a server accepting diverse client connections. Suppose, as well, that you would like the server to be able to process multiple requests simultaneously. Using the traditional way you have two choices to develop such a server:

a. Implement a multi-thread server that manually handles a thread for each connection. b. Using an external third-party module.

Both solutions work, but adopting the first one you have to develop the whole thread-management solution, with related concurrency and conflict troubles. The second solution makes the application dependent on a non-JDK external module and probably you have to adapt the library to your necessities. By means of the non-blocking socket, you can implement a non-blocking server without directly managing threads or resorting to external modules.

Before going into details, there are few terms that you need to understand:

Java NIO has a class called Selector that allows a single thread to examine I/O events on multiple channels. How is this possible? Well, the selector can check the "readiness" of a channel for events such as a client attempting a connection, or a read/write operation. This is, each instance of Selector can monitor more socket channels and thus more connections. Now, when something happens on the channel (an event occurs), the selector informs the application to process the request. The selector does it by creating event keys (or selection keys), which are instances of the SelectionKey class. Each key holds information about who is making the request and what type of the request is, as shown in the Figure 1. 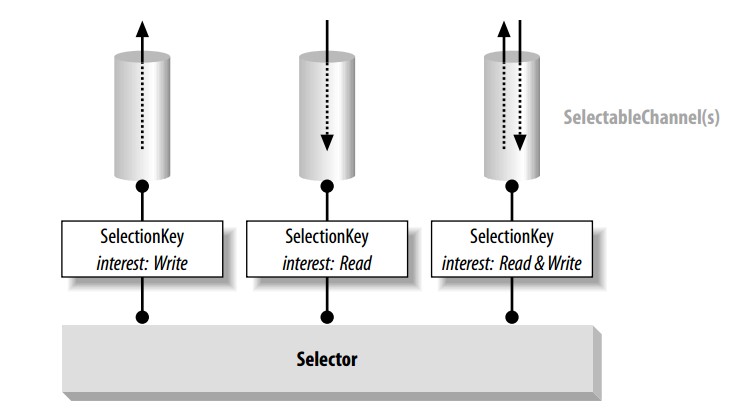 A server implementation consists of an infinite loop in which the selector waits for events and creates the event keys. There are four possible types for a key:

Usually acceptable keys are created on the server side. In fact, this kind of key simply informs the server that a client required a connection, then the server individuates the socket channel and associates this to the selector for read/write operations. After this, when the accepted client reads or writes something, the selector will create readable or writeable keys for that client..

Now you are ready to write the server in Java, following the proposed algorithm. The creation of the socket channel, the selector, and the socket-selector registration can be made in this way:

First we create an instance of SocketChannel with ServerSocketChannel.open() method. Next, configureBlocking(false) invocation sets this channel as nonblocking. The connection to the server is made by serverChannel.socket().bind() method. The HOSTNAME represents the IP address of the server, and PORT is the communication port. Finally, invoke Selector.open() method to create a selector instance and register it to the channel and registration type. In this example, the registration type is OP_ACCEPT, which means the selector merely reports that a client attempts a connection to the server. Other possible options are: OP_CONNECT, which will be used by the client; OP_READ; and OP_WRITE.

Now we need to handle this requests using an infinite loop. A simple way is the following:

You can find the implementation source here

An alternative to the the Non-blocking implementation we can deploy an Asynchronous Server. For instance, you can use the AsynchronousServerSocketChannel class, which provides an asynchronous channel for stream-oriented listening sockets.

To use it, first execute its static open() method and then bind() it to a specific port. Next, you'll execute its accept() method, passing to it a class that implements the CompletionHandler interface. Most often, you'll find that handler created as an anonymous inner class.

From this AsynchronousServerSocketChannel object, you invoke accept() to tell it to start listening for connections, passing to it a custom CompletionHandler instance. When we invoke accept(), it returns immediately. Note that this is different from the traditional blocking approach; whereas the accept() method blocked until a client connected to it, the AsynchronousServerSocketChannel accept() method handles it for you.

Here you have an example:

You can find the full code here

What's the best way to implement a non-blocking socket in Java?

There is only one way. SocketChannel.configureBlocking(false).

Apart from using non blocking IO, you might find it is much simpler to have a writing thread for your connection.

Note: if you only need a few thousand connections, one to two threads per connection is simpler. If you have around ten thousand or more connections per server you need NIO with Selectors.

java.nio package provides Selector working much like as in C.

I just wrote this code . It works well . This is an example of the Java NIO as mentioned in the above answers but here i post the code .

-1
Close TCP connection after a minute of inactivity
1
Modbus Pulse Coils with Spring Boot project
0
Receiving messages from Client
0
TCP/IP Client in Kotlin that does not wait forever for server message
0
How to make socket write data faster in Java?

655
Is there a destructor for Java?
653
Get an OutputStream into a String
599
A non-blocking read on a subprocess.PIPE in Python
555
Why can't I define a static method in a Java interface?
899
Efficiency of Java "Double Brace Initialization"?
0
Speeding up non-blocking Unix Sockets (C++)
1
Using multiple sockets, is non-blocking or blocking with select better?
476
asynchronous and non-blocking calls? also between blocking and synchronous
85
What does Python's socket.recv() return for non-blocking sockets if no data is received until a timeout occurs?
86
non-blocking IO vs async IO and implementation in Java