Can OpenCV for Android leverage the standard C++ Support to get native build support on Android Studio 2.2 for Windows?

There are many questions and answers surrounding getting native opencv for android building properly. Some use gradle, others use external tools. These numerous, complicated, and often conflicting descriptions for native OpenCV builds might be simplified with a consistent starting point; when creating an Android Studio 2.2 Beta project, there is an way to include C++ support: 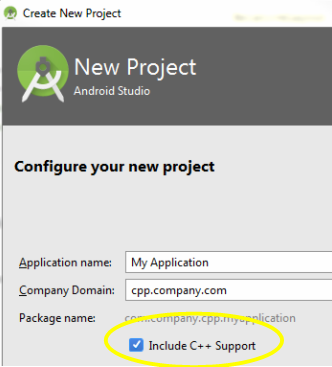 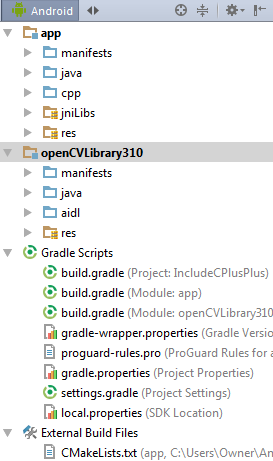 This feature was added around June of 2016. See Android tools technical docs for more information.

Using Android Studio 2.2 or higher with the Android plugin for Gradle version 2.2.0 or higher, you can add C and C++ code to your app by compiling it into a native library that Gradle can package with your APK. Your Java code can then call functions in your native library through the Java Native Interface (JNI). If you want to learn more about using the JNI framework, read JNI tips for Android.

To recognize an Android project that uses native (C++) OpenCV code, the project will typically include a *.cpp file containing JNIEXPORT entries along with implementations that use #include <opencv...hpp> functionality. This, as opposed to importing the OpenCV module and copying the libs folder into jniLibs, which only allows calling OpenCV functionality from Java.

Is it possible to use this starting point to configure a OpenCV native 'hello world' app, proving the build is working?

ADDITIONAL INFORMATION 8/22
Since this puzzle is about CMake and less about OpenCV, I thought I'd give out a project starting point for those not interested in OpenCV. You could get the starting point project going reasonably quickly using the information in OpenCV in Android Studio.

Here is a youtube video that shows the creation of a new Android Studio project, importing OpenCV, configuring the native C++ build, resulting in the OpenCV "hello world" application that's equal to the one in gitHub.

ADDITIONAL INFORMATION 8/27
The version committed today, based on the answer from Bruno Alexandre Krinski does compile native OpenCV calls: https://github.com/sengsational/HelloCv . There is a separate problem concerning the "Installation Blocked" message, where, upon installation, Android warns the user "This app contains code that attempts to bypass Android's security protections." Since I am unsure that this is an issue with the build technique, I will not expand this question to include that issue (but if someone has input on that problem, please advise).

It seems you already have imported the opencv module, now, open your CMakeList.txt and add the follow lines:

to include your lib_opencv that you have created. To finish, you add the follow line:

and below of buildTypes you add:

For more details, you can see this: https://github.com/googlesamples/android-ndk/tree/master/cmake/hello-libs

With OpenCV 3.2 configuration could be actually quite short:

That is it, 4 lines and no need to copy anything into your project. Just be sure that OPENCV_HOME points to the directory where OpenCV Android SDK is located.

One additional benefit of this approach - you can link with OpenCV statically, which would dramatically reduce the size of your app/library.

I use this approach in one of Github projects: https://github.com/Fotoapparat/FaceDetector

Do same as Bruno Alexandre Krinski's Answer but

in place of this line

put this line, (I don't know why this worked for me)

(Follow all the instructions of above answer except this)

ABIs [armeabi] are not supported for Android platform

Not the answer you're looking for? Browse other questions tagged windows android-studio cmake java-native-interface opencv4android or ask your own question.