Check if a user has scrolled to the bottom (not just the window, but any element) [duplicate]

Ask Question
Asked 12 years, 3 months ago
Modified 30 days ago
Viewed 739k times
760
This question already has answers here:
How to detect if browser window is scrolled to bottom? (22 answers)
Closed 1 year ago.

The community reviewed whether to reopen this question 11 days ago and left it closed:

I'm making a pagination system (sort of like Facebook) where the content loads when the user scrolls to the bottom. I imagine the best way to do that is to find when the user is at the bottom of the page and run an Ajax query to load more posts.

The only problem is I don't know how to check if the user has scrolled to the bottom of the page. Any ideas?

I'm using jQuery, so feel free to provide answers that use it.

You can test it here, this takes the top scroll of the window, so how much it's scrolled down, adds the height of the visible window and checks if that equals the height of the overall content (document). If you wanted to instead check if the user is near the bottom, it'd look something like this:

You can test that version here, just adjust that 100 to whatever pixel from the bottom you want to trigger on.

Differently put, we are "scrolled" when this equivalence is true:: 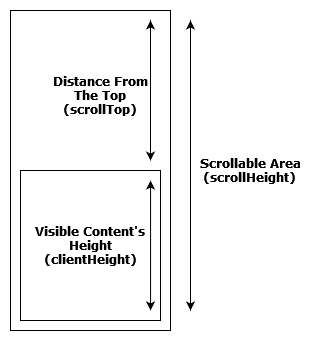 As mentioned however, some of these properties are rounded, which means that the equality can fail in cases where scrollTop would have a decimal component or when the rounded values align poorly.

It is possible to mitigate that problem by comparing the absolute difference to a tolerable threshold:

A snippet that prevents rouding error could look like this:

Note that I've added a div that is too big for its container to force the scrolling but there's no need to "wrap" the content in another element, text directly in an element would make the element overflow.

The more I understand about it and the less I find it's within the scope of this answer (this codereview question and its answer, and this linked article are of interest), but in specific cases (if the handler does expensive computation, if we tie an animation to the scroll event, if we only want to launch the event at the end of the scroll motion, or any situation that may warrants it) it can be useful to:

Great care must be taken in choosing to do any of these things, for instance throttling the event could prevent the last scroll to fire, which could completely defeat an infinite scroller.

Not doing any of those three things works perfectly fine most of the time, as just looking if we're completely scrolled is relatively inexpensive.

Nick Craver's answer works fine, spare the issue that the value of $(document).height() varies by browser.

To make it work on all browsers, use this function from James Padolsey:

in place of $(document).height(), so that the final code is:

Further to the excellent accepted answer from Nick Craver, you can throttle the scroll event so that it is not fired so frequently thus increasing browser performance:

Nick Craver's answer needs to be slightly modified to work on iOS 6 Safari Mobile and should be:

Note: The window.innerHeight property also includes the horizontal scrollbar's height (if it is rendered), unlike $(window).height() which will not include the horizontal scrollbar's height. This is not a problem in Mobile Safari, but could cause unexpected behavior in other browsers or future versions of Mobile Safari. Changing == to >= could fix this for most common use cases.

Where elm is an element retrieved from i.e document.getElementById.

You can do footerHeight - document.body.offsetHeight to see if you are near the footer or reached the footer

Here is a piece of code that will help you debug your code, I tested the above answers and found them to be buggy. I have test the followings on Chrome, IE, Firefox, IPad(Safari). I don't have any others installed to test...

There may be a simpler solution, but I stopped at the point at which IT WORKED

If you are still having problems with some rogue browser, here is some code to help you debug:

I hope this will save someone some time.

It calculates distance scroll bar to bottom of element. Equal 0, if scroll bar has reached bottom.

This is my two cents:

Here is a vanilla JavaScript solution that uses ES 6 and debounce:

My solution in plain js:

Instead of listening to the scroll event, using Intersection Observer is the inexpensive one for checking if the last element was visible on the viewport (that's mean user was scrolled to the bottom). It also supported for IE7 with the polyfill.

Nick answers its fine but you will have functions which repeats itsself while scrolling or will not work at all if user has the window zoomed. I came up with an easy fix just math.round the first height and it works just as assumed.

I Have done this very easy way with pure JS.

All these solutions doesn't work for me on Firefox and Chrome, so I use custom functions from Miles O'Keefe and meder omuraliev like this:

You can try the following code,

Try this for match condition if scroll to bottom end

This gives accurate results, when checking on a scrollable element (i.e. not window):

jQuery's .outerHeight() should give similar result to JS's .offsetHeight -- the documentation in MDN for offsetHeight is unclear about its cross-browser support. To cover more options, this is more complete:

Safari can scroll past the bottom of the page which was causing a bug in our application. Solve this using >= instead of ===.

Here's my two cents as the accepted answer didn't work for me.

Google Chrome gives the full height of the page if you call $(window).height()

Instead, use window.innerHeight to retrieve the height of your window. Necessary check should be:

Many other solutions doesn't work for me Because on scroll to bottom my div was triggering the alert 2 times and when moving up it was also trigerring upto a few pixels so The solution is:

Here is the most simple way to do it:

(2021) Lots of answers here involve a ref to an element, but if you only care about the whole page, just use:

Short example how to use it:

256
How to detect if browser window is scrolled to bottom?
17
How do you detect when you're near the bottom of the screen with jQuery?
12
Javascript/JQuery perform function when user scrolls near bottom of page
5
Jquery if $(window) scroll down function
0
how to stop double javascript trigger at the bottm of the page
-1
Detect scroll end for a page
57
Get scroll position with Reactjs
55
JavaScript - Get Browser Height
22
Highlight Menu Item when Scrolling Down to Section
18
Detect when Scroll reaches the BOTTOM of the page [ without jQuery ]
See more linked questions

484
jQuery $(document).ready and UpdatePanels?
1572
How do I find out which DOM element has the focus?
598
Using jQuery to test if an input has focus
1044
Best way to use Google's hosted jQuery, but fall back to my hosted library on Google fail
256
How to detect if browser window is scrolled to bottom?
846
Check if an array contains any element of another array in JavaScript
208
How to detect scroll position of page using jQuery
387
Keep overflow div scrolled to bottom unless user scrolls up