"Invalid Swift Support - The SwiftSupport folder is missing" with Xcode 7.3.1

After submitting an app update using Application Loader, I got this email from Apple:

We have discovered one or more issues with your recent delivery for "[App Name]". To process your delivery, the following issues must be corrected:

Invalid Swift Support - The SwiftSupport folder is missing. Rebuild your app using the current public (GM) version of Xcode and resubmit it.

Once these issues have been corrected, you can then redeliver the corrected binary.

I have confirmed that this binary was built with the latest Xcode GM (7.3.1), so that is not the issue. I have seen a wide variety of potential fixes for this problem online but was hoping that by giving further details somebody might be able to help me figure out the specific solution.

The solution here was in this answer. We needed to use the new -exportOptionsPlist flag with xcodebuild instead of the older -exportFormat and -exportWithOriginalSigningIdentity flags. The plist just needs to have the method key set to app-store.

I received this same email after uploading an .ipa file to App Store Connect through the Transporter app. The following is where I went wrong: I distributed the app using ad hoc.

The following steps are the solution for my error:

In my case, I just added redundant swift file to the project and it solved the problem.

You should choose "Save for iOS App Store Deployment" instead of "Save for Ad Hoc Deployment" option at the time of creating ipa file. 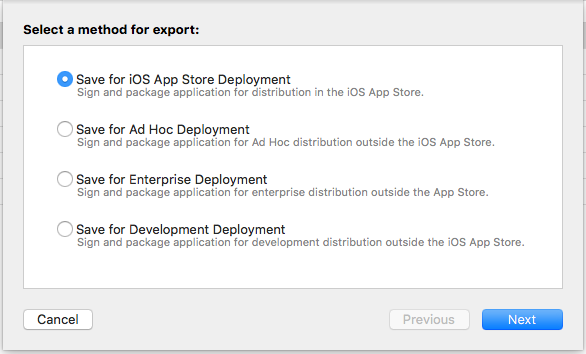 EXPO users. I had this problem with expo build:ios it got me stumped for days. The build from the expo server was about 39mbs which was far smaller than previos versions.

To fix it I had to use

This resets all the credentials (I said yes to all questions) then rebuilds the app. The resuling ipa file was 250mbs and everything is now working preperly.

Use this https://github.com/ndpiparava/Swift_StripArm64e script file remove arm64e from .app file

Not the answer you're looking for? Browse other questions tagged ios swift xcode xcode7 app-store-connect or ask your own question.

43
Invalid Swift Support / The SwiftSupport folder is empty
37
What does the "Embedded Content Contains Swift Code" build setting in Xcode 6 do?
4
Invalid Swift Support when submitting App
2
The bundle at … contains disallowed file 'Frameworks'
0
The files aren't at the expected location iTunes Connect