What is a PDB file?

What is a PDB file and how can I exclude it from the release folder when I rebuild my solution?

A PDB file contains information for the debugger to work with. There's less information in a Release build than in a Debug build anyway. But if you want it to not be generated at all, go to your project's Build properties, select the Release configuration, click on "Advanced..." and under "Debug Info" pick "None".

I had originally asked myself the question "Do I need a PDB file deployed to my customer's machine?", and after reading this post, decided to exclude the file.

PDB is an abbreviation for Program-Debug Data Base. As the name suggests, it is a repository (persistent storage such as databases) to maintain information required to run your program in debug mode. It contains several vital information required for code debugging e.g. at what points you have put break points where you expect the debugger to break in Visual Studio (VS).

This is the reason why Visual Studio fails to hit the break points if you remove PDB files from the debug directory. Visual Studio debugger is capable of telling you the exact line number of code file at which any exception occurred along with its stacktrace. It is able to do so with the help of PDB files only. Thus PDB files are very helpful for debugging purposes.

In general, it is not recommended to exclude the generation of PDB files during build process. From production release stand-point, what you should be doing is create the PDB files but don't ship them to customer site in product installer. Preserve all the generated PDB files on a symbol server from where it can be used/referenced in future if required.

It is specially important in scenario where you debug process crash issues. While analysing the crash dump files, Visual Studio will not be able to make out the exact line of code where program is crashing if the original PDB files created during the build process were not preserved.

If you still want to disable generation of PDB files then follow below steps: 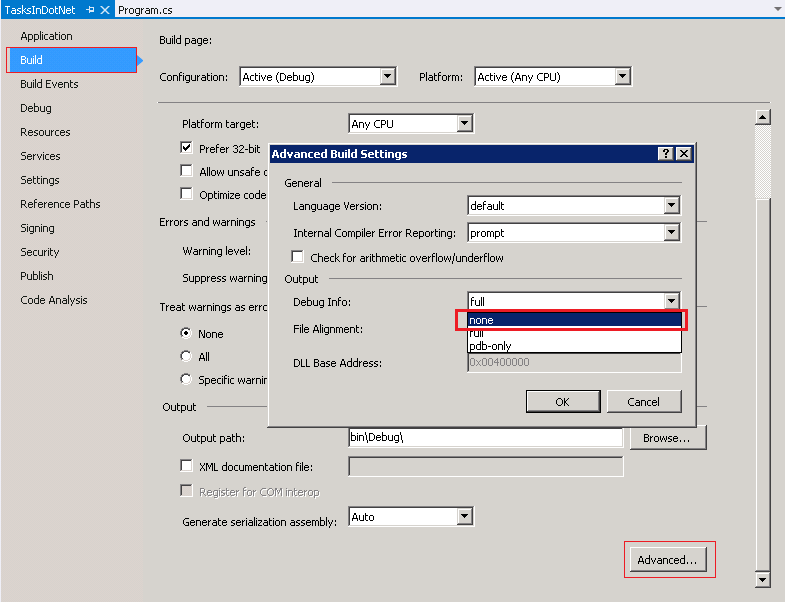 Note: This setting will have to be done separately for Debug and Release build configurations.

A PDB file contains information used by the debugger. It is not required to run your application and it does not need to be included in your released version.

You can disable pdb files from being created in Visual Studio. If you are building from the command line or a script then omit the /Debug switch.

When you build a project using Visual Studio or command prompt the compiler creates these symbol files.

Not the answer you're looking for? Browse other questions tagged c# pdb-files or ask your own question.

0
Where must PDB files be located for debugging to work?
6
Symbol servers explanation
9
Why does Visual Studio generate these additional files?
4
How does Exception.StackTrace know lines from my source code?
6
Why did my Visual Studio start acting this way? iisexpress cannot find or open the PDB file
8
Why is my Sitecore.Context.Language resetting in Controller?
0
Should .pdb files from obj/Debug be added to source control?
-1
vs2012 release build extra files
0
Why does the C# compiler always set the IgnoreSymbolStoreSequencePoints flag?
1
How to create msi installer with wix?
See more linked questions