Difference between RDBMS and ORDBMS

It happened to me when I was reading about PostgreSQL on its wiki page where it refers to itself as an ORDBMS. I always knew about Microsoft SQL Server which is an RDBM system. Can someone help me understand the main differences between Relational Database Management System(RDBMS) and Object Relational Database Management System (ORDBMS) and in what scenarios should I use one of them?

Also, my key question is related to the fact that in the world of Microsoft SQL Server we often use a layer of Entity Framework (EF) to do the object relational mapping on the application side. So, in ORDBMS world are all the responsibilities of an ORM already fulfilled by the database itself in entirety or there could be use cases or scenarios where I would end up using an ORM like Entity Framework on top of ORDBMS as well? Do people really even use ORMs on top of an ORDBMS system?

The main elements of RDBMS are based on Ted Codd’s 13 rules for a relational system, the concept of relational integrity, and normalization. The three fundamentals of a relational database are that all information must be held in the form of a table, where all data are described using data values. The second fundamental is that each value found in the table columns does not repeat. The final fundamental is the use of Standard Query Language (SQL).

Benefits of RDBMS are that the system is simple, flexible, and productive. Because the tables are simple, data is easier to understand and communicate with others. RDBMS are flexible because users do not have to use predefined keys to input information. Also, RDBMS are more productive because SQL is easier to learn. This allows users to spend more time inputting instead of learning. More importantly, RDBMS’s biggest advantage is the ease with which users can create and access data and extend it if needed. After the original database is created, new data categories can be added without the existing application being changed.

Object-Relational database (ORDBMS) is the third type of database common today. ORDBMS are systems that “attempt to extend relational database systems with the functionality necessary to support a broader class of applications and, in many ways, provide a bridge between the relational and object-oriented paradigms.”

ORDBMS was created to handle new types of data such as audio, video, and image files that relational databases were not equipped to handle. In addition, its development was the result of increased usage of object-oriented programming languages, and a large mismatch between these and the DBMS software.

There are challenges in implementing an ORDBMS. The first is storage and access methods. The second is query processing, and the third is query optimization.

Most database players don't support it, or don't support it exclusively. It is complex, and not used broadly. Even if "data" is OO in nature, the databases existed decades ago, and they cannot take ORDBMS (or OODBMS). Learning curve also imposes problems.

ORDBMS/OODBMS are like virtual registry view you see in Registry Editor. Contents are tree-styled objects. But internally they might be stored as flat/hierarchical or in relational manner. You really don't care - the APIs provide you the view of registry information.

Similarly, even if major players don't support (and won't support) OO nature of database, they may provide some extensions. Or, you may have to craft your own framework for OO data. A movie database, having actors and directors can be represented using relations (tables). Actors, directors, shooting-locations would also be classes/objects, and can easily be represented using tables, and referential integrity imposed by database/DB designer.

You, as a developer would make this relational nature of data to an object-oriented form having Movie as a class, referencing actors/directors (1:1 or 1:N). I am not aware how/what EE facilitates this, but it would be doing mapping this way only.

Following diagram shows how data can be accessed. 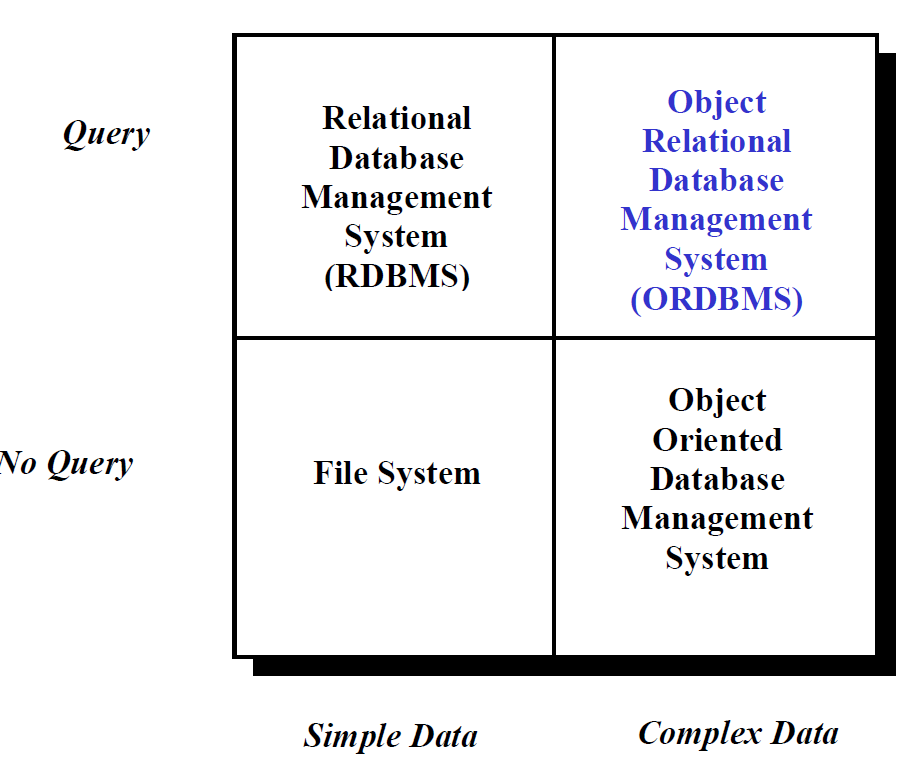 18
What does PostgreSQL to be ORDBMS mean?
4
What is the difference between an ORM and an ORDBMS?