If I try downgrading from Pyinstaller 3.2 to 3.1 I instead get the following traceback when I try to run the executable.

I tried adding --hidden-import=collect_submodules('pkg_resources._vendor') to pyinstaller as noted here but it had no effect. Same error. This appears to be due to an issue with setuptools. I'm using 26.0.0. Downgrading to 19.3 that many sources say fixes the issue does indeed fix this issue but then I'm back to the issue I have below.

I have a python 2.7 pyqt4 project I'm trying to turn into an .exe using pyinstaller. I use:

pipegui.py can be found on github here

I get a working executable and the app appears functional. Here is what the terminal spits while pyinstaller is freezing. However the app crashes when I run particular parts of my program. It crashes and the terminal goes in a loop continually outputting the same traceback below with "Poolworker-X" at the very top continually incrementing: 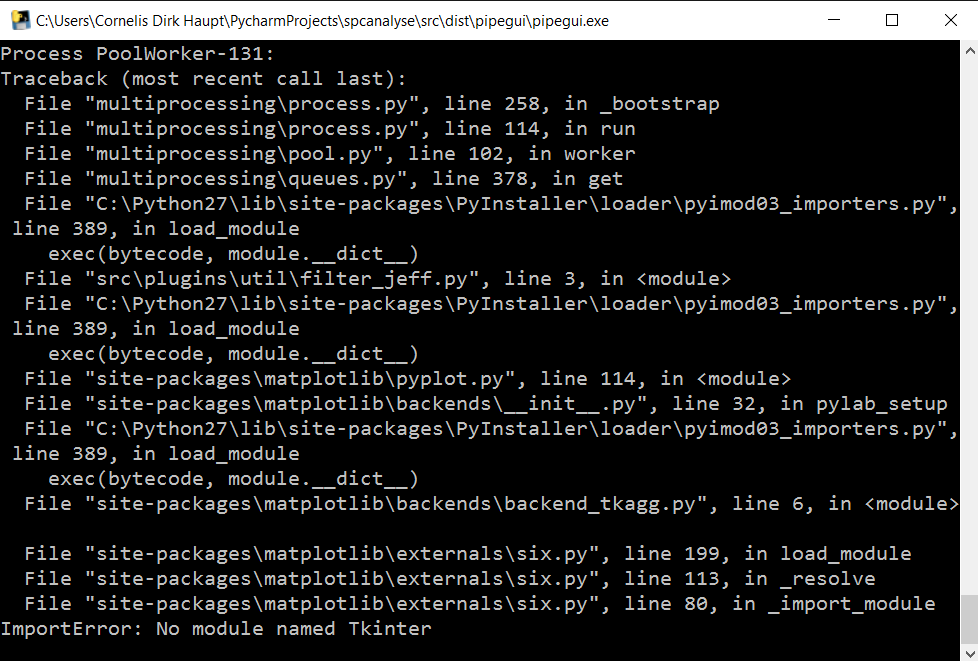 As you can see tkinter is implicated, despite the word "tkinter" appearing nowhere in my project (using pyqt4). I am making use of matplotlib though and from answers discussed here and here I have added the following to the top of pipegui.py my main script:

This however seems to be a step in the wrong direction because after freezing with this (and the same flags as before) my executable wont even open and instead I get this:

Here is pyinstaller's pretty-much identical output while freezeing. Remember all I did was add those 3 import statements above. That's it.

I also tried pyinstaller --additional-hooks=. --clean --win-private-assemblies --hidden-import=Tkinter pipegui.py and it made no difference. I'm completely perplexed as to why trying to import tkinter is doing this. Will fixing this traceback lead me closer to solving the other?

I only figured out after trying all this that the only parts of my executable that are crashing are parts that make use of parmap multiprocessing. Classes that make use of matplotlib but not parmap are working fine.

So please note my question is how the first traceback can be fixed and also why are both matplotlib and tkinter popping up in the traceback despite my code where the crash occurs making use of niether?

Repiklis provided the solution in the comments. Further note that as of January 15 2017 Pyinstaller version 3.2.1 was released. I now use this and it solves this issue along with others like this and this that I could previously only solve by using the developer version. So I highly recommend upgrading to the latest version if you haven't already.

Not the answer you're looking for? Browse other questions tagged python-2.7 matplotlib tkinter multiprocessing pyinstaller or ask your own question.

1355
Save plot to image file instead of displaying it using Matplotlib
0
Executable from Python2 script w. PyInstaller: Qt4 module import error
1
Pyinstaller with Tkinter Matplotlib numpy scipy
213
matplotlib error - no module named tkinter
18
Exception: Cannot find PyQt5 plugin directories when using Pyinstaller despite PyQt5 not even being used
7
How to use pyinstaller with matplotlib in use
0
Matplotlib pyinstaller error failed to execute