How to use X Windows with Emacs on Windows 10 Bash?

I am using the Bash on Ubuntu on Windows program to use Emacs for C++. Right now, I can code everything using the keyboard shortcuts, however, I want to select text with my mouse or set the mark with my mouse instead of always having to use my keyboard.

To get the X Windows System, I already did sudo apt-get install xserver -xorg but emacs still runs in a terminal editor.

I don't know what other commands to use or how to get X Windows to start running.

Windows bash does not support X Server. However, using a Windows X Server port such as MobaXTerm, XMing or vcXsrv in conjunction with Windows bash works. Some things work out of the box (gvim did,) emacs requires more effort.

Here's how I've made it work:

Make sure you set the DISPLAY

Run MobaXTerm (you don't need anything to do in it, just start it - it will start X Server when needed.)

Run emacs in bash and enjoy.

One problem remains, and it persists across all three packages I've tested (MobaXTerm, XMing and vcXsrv). Emacs sticks to the initial frame size, and doesn't resize its frame when the window is resized. Same problem with the menu bar - when menu bar is disabled, emacs doesn't reclaim its space, it remains as a grey rectangle. This problem seems to be peculiar to emacs on Windows bash - gvim and other GUI programs seem to work fine. Also, running emacs 25.1 on Linux using any X Server on Windows works fine. I have tried to build emacs with different GUI settings (GTK 2.0 etc.) but emacs make on Windows bash gets stuck. If I find a workaround for this I will post an update.

Update 09/24/2017 According to Jarett the following in your init.el should fix the frame resizing problem:

I don't have Windows with bash active anymore, so I can't test it.

Thanks for @Yuri's nice answer, it works! After some further try&errors I found a way to fix the white border issue. You will need to rebuild from Emacs v24.5 source code (I tried some v25 versions in the git repository but all failed, if you are using git repository, checkout tag "emacs-24.5-rc3"). During the configuration stage, you will need to choose "lucid" (or "athena", same thing) x-toolkit instead of the current "gtk3". Notice that the "motif" has the same problem.

First, download Emacs source code and install "libxaw7-dev" package. The "libncurses5-dev" is just in case you don't have it. Assume we do everything in the directory ~/build-emacs24:

Now we have "emacs-24.5" directory extracted. In order to prevent the D-BUS issue reported elsewhere let's configure without it, and installed it in /usr/local/bin (by default):

Now, we are almost ready to build Emacs. But before that, we need to tweak the kernel a bit or the build will soon fail. (Let's skip the details, if you are interested, it's explained in the "etc/PROBLEMS" in your emacs source code.) You only need this during the build stage. Once your new emacs installed you don't need to do this again.

Now let's go into the long build process, you might experience an overall system slowdown during the build, you can reduce the number of threads used in the build (here I use "4" for a 2 cores 4-threads Intel CPU, don't use a number larger than supported threads (cat /proc/cpuinfo) or it will become even slower.)

Takes only a few minutes? More to come, now install it (remember the "sudo" here):

The whole build and install takes less than 10 minutes on my machine, not too bad. Now we have a working Emacs 24.5 located at "/usr/local/bin/emacs". If you have everything setup as @Yuri's answer, you should be able to launch it now:

Now you can maximize it and do things you want. Here is a screen shot, noticed the upper right corner, it's maximized: 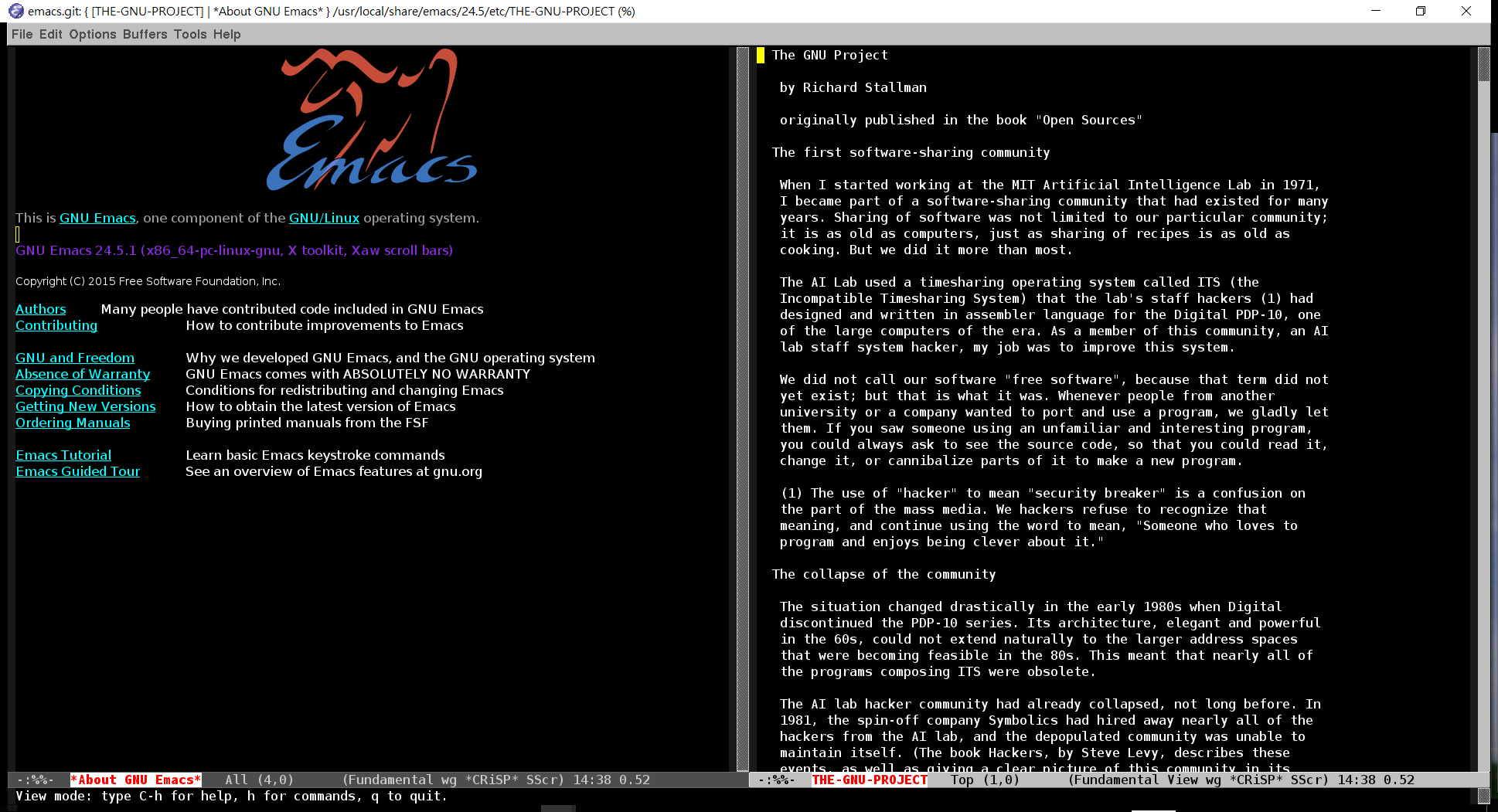 Don't worry about the colors, it's my own theme selection.

There is still one more problem. Let's again workaround it. Sometimes you selected a menu item and the "white border" attacks again! 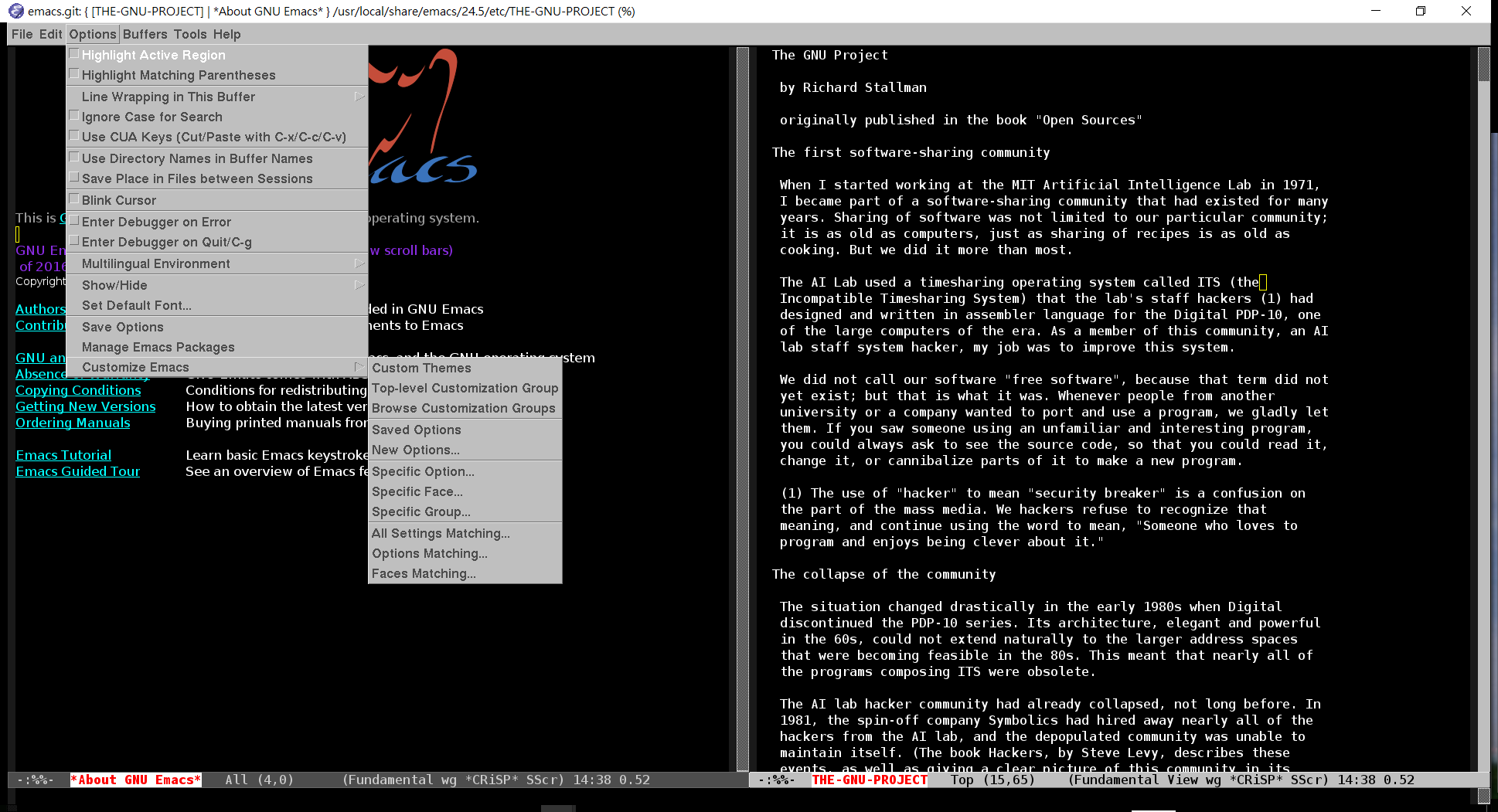 It's now smaller but still annoying. 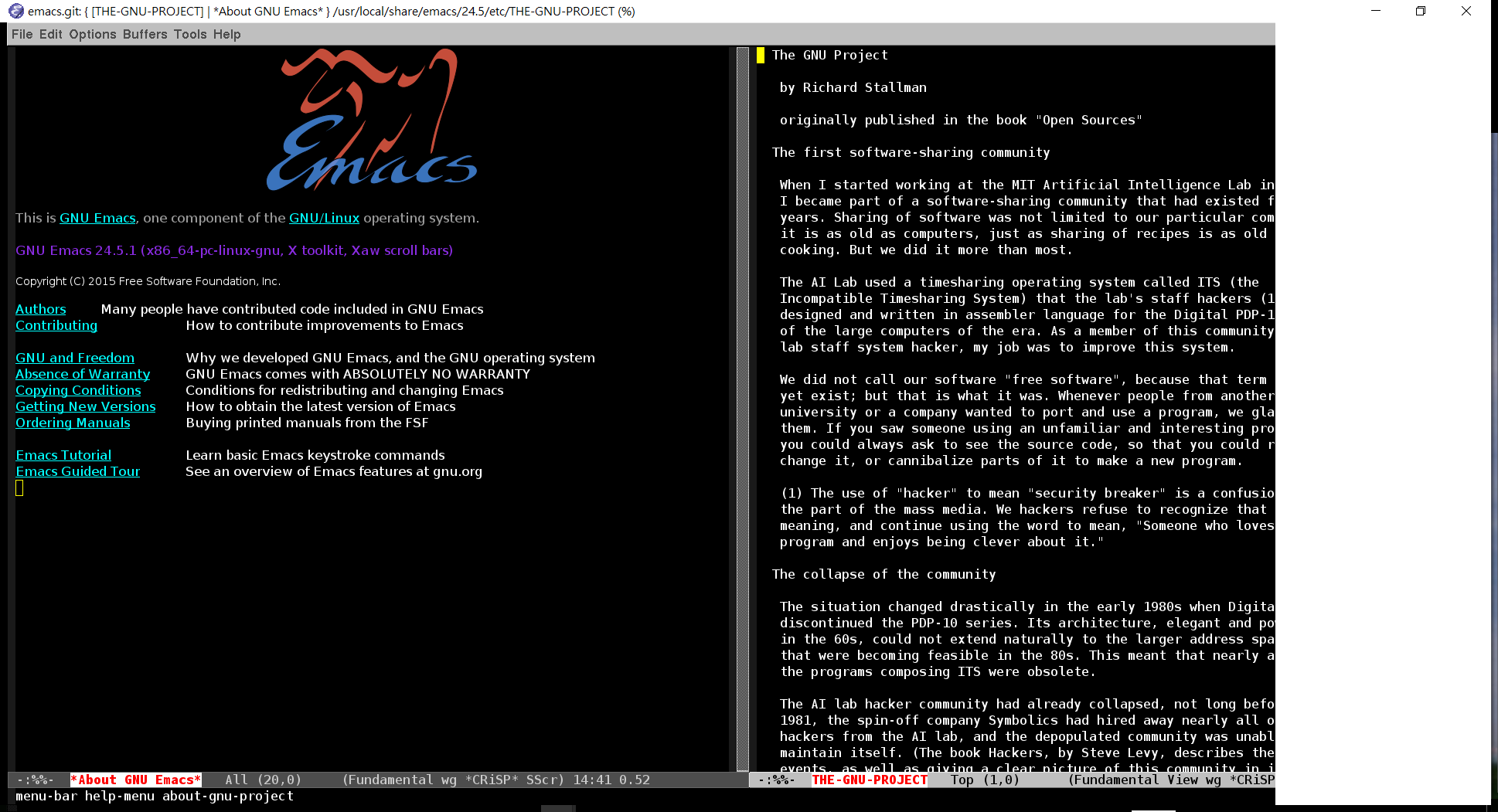 Fortunately this time we can let it go away. Maximize/restore the window and it will go away. After a few rounds it sometimes stop happening again, but not always. This is still annoying. Since resizing the window can fix this issue, why don't we make it automatic? Maybe a not-too-bad workaround?

The code is not perfect, but it works. It will resize your frame a bit and restore it right away when you use the menu. It also prevent itself from frequent resizing.

The default emacs will work with Xming and other options. The issue is that the default alternative points to the emacs24-nox command. You need to install 'emacs24' instead, which removes emacs24-nox.

Make sure that $DISPLAY is set correctly.

Not the answer you're looking for? Browse other questions tagged emacs windows-subsystem-for-linux or ask your own question.

219
Using Emacs to recursively find and replace in text files not already open
738
Differences between Emacs and Vim
2925
How do I make git use the editor of my choice for commits?
192
Step-by-step debugging with IPython
0
Can't find emacs package on Debian
90
How do I use Bash on Ubuntu on Windows (WSL) for my VS Code terminal?
1
Bash on Ubuntu on Windows can't use `sudo apt-get install <packagename>`
1
Cannot use linux fonts in emacs under Bash for Windows
1
CLion with WSL try to run QT application (xcb can not be loaded)